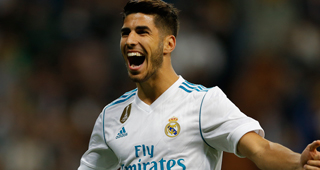 Marco Asensio declined the opportunity to rule out a move to Barcelona next summer when his contract with Real Madrid expires.

Asensio hasn't ruled out extending his deal with Madrid, but no talks have taken place to date.

"Honestly, I don't know if they have called," Asensio told Spanish radio station Cope when asked if he was aware of Barca's interest.

"A lot of other clubs have been linked [with me] as well. But it's normal because in seven months, well, from January actually, I am free to speak to other teams."

Asensio has made 239 appearances for Los Blancos, scoring 50 goals, and won three league titles and three Champions Leagues, among other trophies.