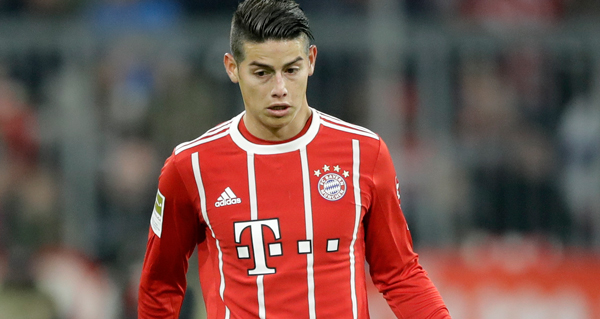 You can find holding midfielders who defend well and conservative worker bee types who don’t give possession away, strikers who can convert a decent cross, and pacey braindead wingers to zoom up the pitch and blast the ball five feet over their heads. Set piece specialists, big oak-shouldered center backs, keepers with decent ball skills. Soccer is a global game and so the talent pool is deep. In the transfer market, If you’ve got a particular player in mind for a role in your team, chances are there are several or even a dozen other guys who could do a similarly competent job. This one’s younger, this one’s a better athlete, this one is familiar with the league you play in, but all of them fit the archetype you’re looking for.

There are only a handful of truly peculiar players in the world, and James Rodriguez is one of them. He reads the game with nigh-peerless precision, attuned to the cresting wave of an attack, releasing his pass sometimes even a split-second before the forward decides to make his run. His technical skill allows him to work out of tight spaces and put the ball precisely where his teammates need it, not even a half-step out of the way, and he has perhaps the best left foot in the world this side of Leo Messi. More than all that, he’s a surprising player—first touches that ping softly at odd angles and scramble defenders, clipped through balls that seem to contract as they travel through traffic, strikes that don’t make sense until they’re suddenly curling inside the post.

You might say that any club would be happy to have James, except for the fact that his last two haven’t seemed too thrilled with him. He had one great season with Real Madrid in 2014-15 (13 goals, 13 assists, nearly 3000 minutes played in La Liga and the Champions League), then Zinedine Zidane took over for Carlo Ancelotti and James found himself losing minutes to a combination of Isco, Casemiro, and Gareth Bale. After two years of that, he secured a two-season loan move to Bayern Munich that contained an eminently affordable purchase clause, which the club didn’t utilize because he didn’t excel in Bavaria either. Now he’s back in Madrid, 28 years old and right in the middle of what should be his prime, and unsure where he’s going to play this upcoming year. If it’s at the Santiago Bernabéu, it’s probably going to be sparingly. Zidane, who’s effectively got a dictator’s latitude these days, doesn’t rate him.

The market for James is limited, in part because of the transfer fee and wages he would command but also because after four inconsistent seasons, he’s no longer the hot commodity he was when he lighting up the 2014 World Cup with Colombia. Napoli want him, but don’t want to pay the fee Madrid have requested. Atlético Madrid are willing to pay the fee, but Madrid don’t want to sell him to a rival. And that’s about it. With three weeks left before the Spanish and Italian transfer deadlines, James has two suitors. He hasn’t exactly inspired a bidding war.

Another reason for the scant interest is that James is a number 10 in a sport that hardly uses them anymore. What used to be an important position—the playmaker who operates as a kind of offensive hub between the lines—has been replaced in recent years because managers want something different. They prefer someone who scores lots of goals to play behind the main striker, or a box-to-box midfielder who’s going to take on greater defensive responsibilities. Perhaps their system is fluid, so they need someone quick and active, who’s as comfortable on the wing as he is in the middle. James doesn’t offer any of these things. You give him the ball in the the final third and he’ll make good things happen, but he needs to function as the axis around which everyone else rotates—wingers making runs into the box, a physical forward clearing out space. There’s a princeliness to his game. He provides the genius, not the labor.

In 2019, it’s hard to get away with that. Mesut Özil, another natural number 10, has suffered in the public’s estimation in part because, while he has incredible feet and vision, he just doesn’t run all that much. Entire matches pass where he has little effect on the attack while being an active liability when Arsenal don’t have the ball. Wesley Sneijder, if he were 27 years old today, would likely be asked to play as the most advanced player in a 4-3-3, not in the hole as he did during his best seasons at Inter. He would have to apply himself in a high press and get involved in the transition from defense to offense rather than focusing on providing final balls.

Sneijder in his prime could probably figure that out. (He was bad at it with Real Madrid earlier in his career.) Özil, lamentably and defiantly, is who he is. James is more like the Dutchman, in that he can play out on the right wing, cutting onto that magical left foot, and as a more removed central midfielder. He’s not a great tackler, but he’s not allergic to it. The simple fact is, though, that he’s not making the fullest use of his skills in either of those spots. He is the perfect representation of an increasingly outdated idea, and he’s having trouble finding a home because his immense talent doesn’t cut the proper shape. Sometimes uniqueness is not an asset; it only makes you an awkward fit. You can’t find players like James Rodriguez, but then not many clubs are looking.