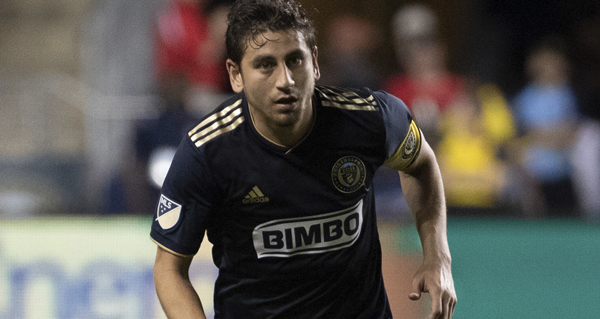 As with every corporate enterprise on this cash-humping earth, soccer associations and clubs dive behind the couch whenever politics enter the discussion. When Barcelona fans display the Estelada or Celtic fans voice their support for Palestine, the clubs are sanctioned by UEFA. When Rayo Vallecano roll out an anti-fascist tifo, they get hit with a fine from La Liga. Pep Guardiola isn’t allowed to pin a yellow ribbon onto his sweater. Players can’t sympathize with struggling workers or the victims of military blockades. The various bodies that govern the sport have decided they don’t want to do the work of differentiating compassionate or value-neutral political statements from hateful ones, so they punish nearly all political expression instead. Nevermind that under this rubric, fighting against Nazism is the same thing as delivering a Nazi salute.

The people who decide this stuff are happy not to care. They hide behind their job descriptions, using their obligation to look after the profits as an excuse not to be extremely myopic, creating a fiction that nobody believes, that a league or a club exists in a vacuum. Politics? What are those? They take money from the Italian communist, the American centrist, the Spanish Francoist. It all spends the same.

Of course this logic occasionally makes you sound like an idiot. MLS commissioner Don Garber recently said that they allow expressions of LGBTQ solidarity in their stadiums because “a rainbow flag is not a political statement.” That’s disingenuous nonsense. The actual answer is that homophobia, after being horrifyingly acceptable from the dawn of man until about 2005, is now more or less verboten in polite American society, and while we’ve still got work to do, we’re trending toward creating a safer and more equitable country for trans people too. What this means for an organization like MLS is that there’s not any money in condemning the people who unite under the rainbow flag. There is, however, quite a bit to be made selling prismatic Zlatan Ibrahimonić shirts. Garber has to pretzel himself trying to explain this contradiction and ends up breaking language in the process. What has always been a political symbol becomes apolitical because, well, because MLS just doesn’t do politics and so pride nights and rainbow merch must be something else. The same goes for FIFA’s women’s game and anti-racism initiatives.

This isn’t an issue that only inflicts boardroom types. Fox Sports talking head Nick Wright, in the wake of those hideous “send her back” chants at a Trump rally a couple weeks ago, tweeted something that was almost entirely correct:

I don’t talk politics on here but this isn’t political, this is obvious: This is abhorrent, obviously racist, dangerous rhetoric and not calling it out makes you complicit.

The “send her back” chant + the “go back to where you came from” are so antithetical to what we should be. https://t.co/0Mwnlaf3gE

The sentiment is bang on, but Wright’s framing betrays a fear that’s endemic to the inhabitants of what the heroically conscientious sportswriter Bob Lipsyte called SportsWorld—a realm apart from the real one. In SportsWorld, you can’t talk about politics, and so Wright sweatily argues that his tweet isn’t political. It’s obvious instead. The Seattle Sounders said the same kind of thing when a couple of their supporters got booted from a Vancouver Whitecaps match for unfurling a banner that read “anti-fascist, anti-racist, always Seattle.” From an owner-signed statement in the aftermath of the incident: “our club believe strongly in inclusion and acceptance… we believe these values to be non-political. Speaking up for equality is simply the right thing to do.” Again, the message is admirable, but being cool with fans who label themselves anti-fascist is, by definition, taking a political stance.

(It should be noted here that Sounders management backed up their words. They let a bunch of supporters hold up signs with the same slogan during the team’s next home game.)

On Sunday afternoon, with the nation still sick and grieving over the El Paso and Dayton shootings, Alejandro Bedoya put the Philadelphia Union up 1-0 over DC United, grabbed an on-field mic, and tersely urged congress to wake the hell up and address the epidemic of gun violence in America. JP Dellacamera, his spine audibly liquifying, called it “interesting” in the moment. Social media applauded and emoji’d and harrumphed in the grand yet inconsequential way it typically does. On Monday, MLS issued a brief, punctiliously bland statement about how sometimes there are tragedies and some people may have strong feelings about them one way or another. They didn’t even mention Bedoya’s name. He apparently won’t be fined or suspended.

Bedoya didn’t walk back his on-field outburst. He was happy to explain himself after the match, to talk about his own fears and frustrations and how he’s trying to use his platform to affect change. He did this thoughtfully, and with the now-trademark exasperation that comes with discussing gun laws in America. It’s obvious to pretty much everyone that this is an ongoing crisis—around 90 percent of Americans support background checks for all firearm sales, which is at least a start—but it’s also a political issue in the thorniest, scummiest possible sense. If you’re for some form or another of gun control, you should probably be advocating for campaign finance reform and the elimination of lobbying too, because the N.R.A. stuffs Republican ears with enough money to insulate them from the despairing wails of widows and orphans and teenagers who lose friends to a psycho with an AR-15. Maybe Bedoya understands the nuances of this mess, and maybe he doesn’t. At any rate, he said something that needed saying, and he wasn’t apologetic about it. That’s always welcome.

He said another crucial thing on Sunday: “before I’m a soccer player, I’m a human being.” That’s simple, but it’s meaningful because being a human being who gives half a rip about other people means occasionally engaging in political action. Anyone who doesn’t understand this is either a moron or tactically pretending to be one. Leagues and clubs heed the concerns of these folks because they’re fearful of anything that might screw up their bottom line. They want a perfectly serene SportsWorld, where nobody has a problem with anything, including the extortionate price of a stadium beer.

That’s a foul dream. An apolitical SportsWorld is good for business and bad for us human beings. Many of the worst things on this earth— mass shootings, poverty, and sexual assaults, hate crimes, police brutality, and endless wars—are in some way the product of people who care very much about politics choosing to ignore, exploit, or actively persecute the vulnerable and the marginalized. If athletes and talking heads and sportswriters and fan groups don’t speak out against this stuff—if they, in other words, don’t do politics—they contribute to the problem. You can’t expect the beancounters at FIFA or MLS or the Philadelphia Union to consistently do the right thing. That is not what they are built to do.

Human beings, on the other hand, weary and outraged and full of compassion, can make things better. That’s organizing a workplace, or joining a march, or running for office yourself. It’s also protesting hate in the stands of a nationally televised match, or decrying gun violence after a goal celebration. Sports, especially a game as global as soccer, can and should be powerfully politicized. Why wouldn’t you pull every lever available to you, to help create a world in which your greatest worry really is how well your team plays on the weekend?