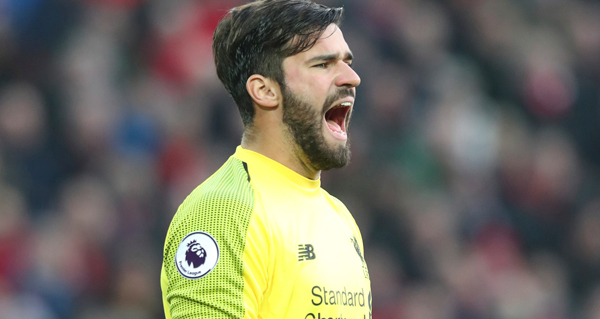 It can be understood as arrogance. Manchester City, Barcelona, Liverpool are beating you 3-0 and their keeper is parked at the top of his own box, maybe even beyond it, not really in a goal-defending position, but then he hasn’t had to do much of that over the past hour. The ball has been in your half for the vast majority of that time, and all he’s had to do is clean up the odd overhit through ball, recycle some back-passes into the attack, take a few goal kicks that barely traveled a polite speaking distance. It’s like he plays this way for want of anything else to do. It would be hard to page through a novel with those bulky gloves, so he figures he might as well play the outfield, keep his circulation up in between the two half-credible attacks he’ll have to deal with today.

There is obviously a purpose to this approach. If your defenders are perilously high up the pitch, the keeper needs to be reasonably close to them, or else you’re leaving your opponents a huge counterattacking space. And if you’re going to play the ball out of defense, especially against a high press, it’s helpful to have a keeper who can provide more than an emergency long ball. There’s an absurd element to having the guy whose job, by name, is to guard the goal abandon his station to make himself available for a pass, but it’s not as high-risk as it sometimes looks, given the fact that the back line players at Barça or City are better passers than most others teams’ midfielders. This maneuver leads to a catastrophically embarrassing goal or two per season, but in capable hands it does more overall good than harm. It’s not even disingenuous to call it smart defending, since keeping possession is the best way to ensure you won’t get scored on.

Before he had solidified himself as one of the finest keepers in the world, back when he was Manuel Neuer’s national team understudy and it wasn’t yet clear that he would ever get on the legend’s level, Marc-André ter Stegen had an interesting time establishing himself at Barcelona. They had bought him in 2014 to replace an aging Víctor Valdés. He ended up stuck behind a fabulously in-form Claudio Bravo for two seasons, playing almost exclusively in Barca’s Champions League matches. When Bravo was sold in 2016, ter Stegen was handed the starting job and proceeded to perform a baroque demonstration of the benefits and drawbacks of the sweeper keeper.

He’s more assured these days, but even a few years ago ter Stegen was technically impressive. He made hard-charging forwards look silly with simple feints and misdirections. He could receive the ball from the left back and in two simple motions—first touch, ping—accurately launch a pass to the other flank. But he was also prone to comically avoidable mistakes. He would try to so delicately caress a firm back-pass that it would squirm away from him and continue traveling toward the goalline. He would casually chip the ball without looking and bonk it directly into an onrushing opponent. He sometimes, against all reason, flatly refused to hit the ball long. This high-wire style occasionally served up paradigmatic examples of why some people think the goalkeeper should hoof it up the pitch every time they get it. At times, he operated as if he were in the final third, with such audaciousness that you wondered if he knew there wasn’t anybody behind him to clean up his mistakes.

Ter Stegen’s avant garde approach to risk assessment eventually gave way to a spectacular steadiness. He’s a little bit less of a lunatic about proving that he can work his way out of trouble as well as any attacking midfielder in the world, and his team is better off for it. He hardly ever switches off like he used to and he is, almost as an afterthought, an awesome shot-stopper. If you wanted to call him the best goalkeeper in the world, I wouldn’t argue with you. He’s probably the most well-rounded, and that’s precisely what Barcelona need him to be.

Alongside ter Stegen on that best-of list are Alisson and Ederson, both of whom relish the opportunity to show off their skill. It’s not a new position, but the sweeper keeper is at its peak in 2019. It’s closer than it ever has been to an orthodoxy. We have a tendency to overstate trends in soccer, as if a handful of big clubs doing something constitutes a fundamental shift in the way the game is played across the world. But in this case, you can see the influence spreading. Managers who aren’t possession evangelists on Pep Guardiola’s level are beginning to realize they shouldn’t use their keeper as a stationary punter. Traditionally excellent goalies like David De Gea and Jan Oblak are evolving their games slightly, taking more touches and playing more short passes than they did a few years ago. You could say, if very few keepers actually play exactly like ter Stegen or Ederson, the Overton window has shifted in terms of what players at the position are expected to do.

If this creates the odd self-inflicted penalty area debacle, it also enriches the sport. Because soccer is a game that can turn on a single mistake, it has for much of its history been defined by conservative ideology. Make the simple play; don’t make a fool of yourself. While this scans, it can also create a really dull spectacle in which the athletes focus too much on what’s definitely possible—i.e. whacking the ball in the general direction of a forward—and less on what can be accomplished with greater imagination and endeavor. In this way, the sweeper keeper represents a fuller exploration of a player’s capabilities than the default glued-between-the-posts role. Not everybody has the talent to play it, but it’s an ideal to strive for. And soccer needs as many aspirational ideas as it can get.