Villarreal Rebuild A Modern Side 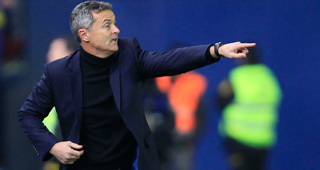 Villarreal’s counter attacking goal against Barcelona in a recent league match was designed last summer. Winter Roberto Soriano, signed from Sampdoria for $15 million, picked up a loose pass in the middle of the field and quickly played striker Alexandre Pato, signed from Corinthians for just $3 million. Receiving the ball at half field and dribbling into Barcelona’s third, the Brazilian played Nicola Sansone. The $14 million striker from Sassuolo then scored on an almost impossible angle. The entire sequence covered eight seconds.

The rehearsed counter attack showed the side at their most incisive. But before that, the telling number: Villarreal have only given up 12 goals in 18 matches this season, the fewest in La Liga. Their defense is statistically better than Atletico Madrid (Atleti are second in the category), and both use a similar framework. Getting appointed Villarreal manager on short notice may have been a blessing for Fran Escriba. Keeping the narrow 4-4-2 defense framework built over the past three seasons, he instead focused on improving relationships within a fractured locker room.

You could understand the pre-season pessimism after previous manager Marcelino resigned two weeks before the start of the season. It seemed a foolish move when judging purely on results. Taking over the side in 2013, Marcelino built a stingy defense that would have received more attention had it not played in the same league with an Atletico Madrid side that turned the same 4-4-2 defensive shape into a brutal art. Regardless, he brought Villarreal from the second division to the Europa League semi-finals and qualified them for a Champions League playoff position in a matter of three seasons. Yet Marcelino’s personality proved too much for the players, and Marcelino stripping center back Mateo Musacchio of his third-captain status was reportedly the last straw. Villarreal have never been a side forged with turmoil.

But Marcelino left behind an effective framework to win matches in the modern game. Quietly last season, the side began to garner comparisons to Atleti and Leicester City in both defensive workrate and quick counter attacks using the pace of their lead striker. The similarities are even more pronounced this year. As with their 4-4-2 counterparts, Villarreal pack the middle with two lines of four, force teams to play wide, and press with two or three players.

The foundation of the defense is built upon familiarity, even after losing Eric Bailly last summer. Three out of Villarreal’s four defenders - Mario Gaspar, Musacchio, and Jaume Costa - have played together since 2009 (Gaspar and Costa came from the youth academy). Gaspar’s development as a marauding right back added a dynamism to Villarreal’s counter attack. They’ve also shown a mastery for the dark arts. Captain and youth academy product Bruno blocked a Messi shot with his outstretched arm inside his own box and got away with it.

Sid Lowe described Villarreal’s personality as not just going under the radar, but living under the radar. This trait goes as far back as their mid-2000s Champions League appearances by the mercurial Riquelme and Manuel Pellegrini, once described as a decent and upstanding man. That is how Villarreal came into our footballing imagination - the small club from a town of 50,000 people that outplayed their counterparts with speed and passing. The style changed, but that under the radar trait bridged the gap between the boom, bust, and boom again period of the last decade.

Similar to another Brazilian prodigy with outsized expectations Oscar, this isn’t quite how we imagined Alexandre Pato’s career playing out after making his Milan debut as an 18-year-old.

For many, the last we saw of Pato was him missing this panenka attempt in the quarterfinals of the 2013 Brazil Cup. It was only a year ago when we wondered “Why no one wants to sign Alexandre Pato”. As Tim Vickery often notes on the World Football Phone-In, he is a top tier player on his day, in the right position - which is one too many “ifs”. But the counter attack against Barcelona exhibits Pato’s best traits: the pace, the close dribbling, and the final ball. Villarreal does have a history of rebuilding South American attackers.

Villarreal needed all three of Pato, Sansone, and Soriano after losing creative linchpins Denis Suarez to Barcelona and Samu Garcia to Rubin Kazan, and Roberto Soldado to an ACL tear in August. If the role of their midfield and defense is clear, the varied attacking approach of the trio can elevate the side from last season. They can rely upon the directness of Pato’s pace in open space, or the quick interplay between Sansone and Soriano. They can create with through balls. And concepts of defending in a 4-4-2 aside, Villarreal show a wrinkles in counterattack that differentiate them from Atleti or Leicester..

Escriba admitted his surprise at being named Villarreal manager with an unassuming resume. With a career spanning since 2001, he lead Elche to promotion from the second division in 2013. After the club was relegated for unpaid tax debts, he took over Getafe and was fired after a year  later. The jury is still out as to whether he has any further nuances up his sleeve once opponents become familiar with his side, but tactics are beside the point after Marcelino. For now, Villarreal have achieved their balance again: a modest manager, a side built from their academy, and a varied attack. Such is the fluidity of a Spanish sides from season to season.

It’s easy to say today that getting relegated in 2013 gave the club a much needed reset from the image of those mid-2000s Champions League side and carried deadweight in older talent and salaries. Currently three points behind Atleti for the final Champions League spot, there is still some distance in reclaiming the imagination as those sides did. But that style may no longer be applicable in today’s game. Although his time with the club ended in controversy, Marcelino deserves credit for his lack of nostalgia in ruthlessly modernized their playing style. Villarreal still embody their club character, regardless of manager, with or without our attention.