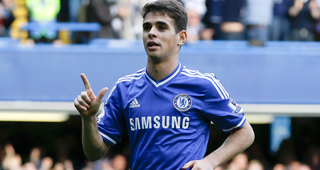 If new Shanghai SIPG midfielder Oscar does nothing else for his career, he will always have his Chelsea debut in the starting lineup. Scoring two goals in a Champions League group match against Juventus, it was the second goal in which he beat Leonardo Bonucci and Andrea Pirlo to the ball, and then Gigi Buffon from outside the box that raised the ceiling of what the then-21-year-old could accomplish on the European level.

The same expectations from that match continues to haunt Oscar to this day. Goals are not the metric to use in defining his quality, but it has been four years since that goal and subsequent comparisons to Mesut Ozil and Kaka. It was his balance of skills without any weakness that made him an intriguing player, yet that style does not scream viral YouTube highlight compilations. He spent the following years chasing his voice and consistent role on Chelsea sides. Perhaps the physicality of the Premier League is not the ideal league for a young player to find themselves.

Oscar had to adapt to four different managers as well. Roberto Di Matteo handed him his starting debut that October night, and he played alongside Juan Mata and Eden Hazard in a creative yet unbalanced midfield three. He was benched under Rafa Benitez the following Spring, a manager whose midfield trio requires little subtlety.

Jose Mourinho returned to Chelsea that summer and showed his appreciation for Oscar’s potential by getting rid of Juan Mata. You could see comparisons drawn with Wesley Sneijder when Oscar was at his best; the tactical instinct and work rate went hand in hand with the requisite playmaking qualities of passing and long range shooting. The 13-14 season was statistically the most productive of his career, yet Chelsea finished third in the league. Mourinho bought Cesc Fabregas the following summer to take over playmaking duties. The move pushed Oscar to the bench, and he never received a consistent run of matches under either Guus Hiddink or Antonio Conte.

Conte’s 3-4-3 formation puts into contrast the styles of N’Golo Kante and Nemanja Matic in comparison with Oscar. Without a traditional playmaker, the two center midfielders must provide running, physicality, and protection to the backline. Oscar's transfer from Chelsea probably came a year too late.

And despite the perception of the league, his role at Shanghai SIPG is no early retirement (Brazil manager Tite built his midfield with Paulinho and Renato Augusto from China). We discussed how the Super League threw a wrench in the European transfer market in 2016, but Oscar’s transfer may be a turning point in the type of player it attracts. For now, his expectations are no less than to win a title for the club that’s only been around for two seasons. He joins manager Andre Villas-Boas at the club, who also was weighed by down unreasonable expectations. Countrymen Hulk and Elkeson round out the attacking trio. This isn’t how we envisioned Oscar’s career unfolding after that Champions League day, but it is a chance for him to get away from the ghosts of unrealized potential and discover his role.

On the European Football Show, former Wolfsburg football director Klaus Allofs discussed the expectations of a then-22-year-old Julian Draxler replacing Kevin De Bruyne’s playmaking skills on the field and his winning spirit off it. Allofs reminded the audience that Draxler was much younger than De Bruyne and thus needed to grow into his leadership role. But in a move symbolizing the instability of the club over the past season, Allofs was let go last December. A year later, Draxler moved to PSG for $40 million.

You could argue Draxler’s time with Wolfsburg was flawed from the beginning. Having signed a personal deal with Juventus, Schalke president Horst Heldt backed out after negotiations fell apart with the Italian champions. That opened the door for Allofs to reinvest the money from the De Bruyne sale to Manchester City for the the player he saw as the next De Bruyne.

Let’s take a minute to play out the Sliding Doors theory of Juventus successfully signing Draxler. The club had starting positions to be filled with the loss of Carlos Tevez, Andrea Pirlo, and Arturo Vidal, and one could imagine the interplay between Draxler and Paulo Dybala (Juan Cuadrado eventually filled Draxler’s role). For his part, Draxler admitted to daydreaming about the transfer and winning both the Scudetto and Coppo Italia. But back to the reality of last season, Draxler grinded out five goals in 21 matches as Wolfsburg finished in eighth place in the Bundesliga.

Still, Draxler is just 23 years old - and Wolfsburg did beat Real Madrid 2-0 in Champions League last season. Draxler then showed his impact in the 2016 European Championships against Slovakia. If Oscar moved to SIPG FC to find himself, Draxler needs to do more of what he has been doing, but on a bigger stage with a stable club.

With that in mind, the move to PSG is a re-do the botched Juventus move. We wrote in our 2016 Club Portfolio Rankings of PSG’s underachieving season. Playing opposite of Lucas Moura as a winger in a 4-3-3 will revive his counter attacking instincts and will fit into manager Unai Emery’s system - if it ever gets fully implemented into the club. But Draxler did score in his PSG debut, and PSG did score seven goals. Perhaps, as Thiago Motta implied, Draxler’s pace and goal scoring ability from the wing is what the side needs to reach their European ambitions.

It signals the fickle nature of player development in discussing the importance of a transfer when the two players in question are just 23 and 25 years old. But especially in Oscar’s case, that is how fast prodigies turn to afterthoughts. Allofs compared Draxler’s time at Wolfsburg to De Bruyne’s time at Werder Bremen in terms of learning how to give consistent performances before moving to a larger stage. In that analogy, Draxler and Oscar would reach their potential at PSG and SIPG FC respectively. Both sides certainly paid for that right.