Claudio Bravo, Joe Hart & The Physicality Of The EPL Goalkeeper 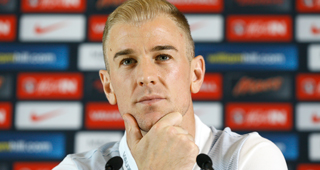 Claudio Bravo’s error in his Manchester City debut last September against Manchester United foreshadowed Pep Guardiola’s difficulties in adapting to the Premier League. Bravo and center back John Stones misplayed Wayne Rooney’s set piece cross, which led to Zlatan Ibrahimovic scoring off the mistake. The unpredictability of crosses, the resulting second ball, and the physicality of one on one aerial battles threatened to take away the game control that Guardiola values in developing his possession based approach. As Guardiola stated after their 4-2 loss to Leicester City, the main variable of the English game is controlling the second ball.

The manner in which Guardiola handled Joe Hart’s departure from Manchester City magnifies any errors Bravo makes this season. Hart’s inability to complete a passing exercise to Guardiola’s standards was one of the many rumored reason for his departure. This set up the characters in City’s goalkeeping morality play: Guardiola as the inflexible ideologue, Hart the sympathetic character, and Bravo expected to live up to a set of impossible standards of an errorless sweeper keeper.

If the match against United opened the cliched questions how newly signed keepers could adapt to the physicality of England, the manner of City’s recent 4-2 loss against Leicester City further opened this stylistic divide. Granted, Guardiola granted Bravo no favors in naming wingbacks Aleksandar Kolarov and Bacary Sagna at center back alongside Stones against the most direct team in the Premier League. The fourth goal in particular, in which Jamie Vardy took advantage of another miscommunication between Stones and Bravo, showed the thin line between the brilliance of a keeper maintaining possession and how foolish an entire team appears when one pass is misplayed.

But at least Guardiola’s defense of Bravo is founded on principles of style, as opposed to the situation of Jurgen Klopp and Liverpool keeper Loris Karius defending themselves against Phil and Gary Neville. Klopp finds himself in a similar situation as Guardiola. This time, Simon Mignolet plays the role of the shot stopper lacking the passing ability required in Klopp’s system. Karius is Liverpool’s Bravo, both in the technical quality of their footwork and struggles to adapt to the physicality of the Premier League over the past three months.

Karius’ mistake that lead to this latest controversy came in his role in giving up the match winning goal in a 4-3 loss to Bournemouth two weeks ago (Bournemouth defender Steve Cook called Karius the weak link of the side as they made it a point to put the German under pressure). After the match, Gary Neville criticized Karius for failing to give confidence to his backline. Jamie Carragher piled on by saying that Karius has yet to resemble a Liverpool keeper.

In an interview the following week, Karius noted Neville’s failure as Valencia manager, to which Neville responded with an Instagram post featuring Carragher’s stinging assessment. Phil Neville then criticized Karius for a lack of focus; Carragher added that Karius needed to “shut up” and do his job. Klopp then accused the Neville brothers of letting their Manchester United biases show in their critique of Karius. On the field, Mignolet was renamed starter for their derby match against Everton.

Sir Alex Ferguson once observed that David De Gea needed to learn how to become more physical to recover from his error prone start at Manchester United. We intuitively understand the battling nature of duels between strikers and defenders, and midfielders against each other. Yet physical demands of the keeper position may be the defining feature of the Premier League, and the one variable that determines how far Klopp and Guardiola can take their respective sides.

Meanwhile, almost a thousand miles in distance and exponentially more in social media attention, Joe Hart has started 12 matches for a Torino side that sits eighth in the Serie A table. While the 22 goals in 16 matches the side have given up this season are hardly impressive, Hart’s impact goes beyond numbers. Manager Sinisa Mihajlovic noted how his professionalism and charisma give his side confidence. The manager also helped Hart’s transition in the press in explaining that the English keeper saw his role at Torino as more than just receiving playing time. For his part, Hart learned 50 Italian words ranging from “pass” to “kick” to “midfield”.

Granted, Hart still makes the occasional blunder, like one against Atalanta in his team debut (which was a miscommunication off a set piece). And Torino do misspell his name from time to time. But contextually speaking, Hart has drifted into the background of an exciting Torino lead by one of the revelations of the season in 22 year old striker Andrea Belotti. Mihajlovic hasn’t placed any extra pressure on his new keeper or burdened him with determining the success of a philosophy. Mihajlovic remarked that Hart’s footwork is good enough for his Torino side, adding that Guardiola should contact him should he want to rid of another player.

One can question whether Guardiola or Klopp misjudged their respective goalkeeper signings, yet the more pertinent one is if they will bend to the Premier League, or continue to try to bend the Premier League towards their style. Guardiola has repeatedly talked about how much he grew as a manager in his time learning a foreign environment at Bayern Munich. His greatest English footballing lesson may be in realizing how little control he actually has.