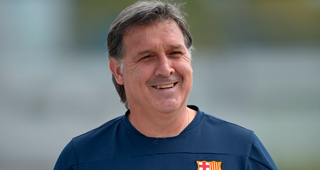 Tata Martino has left his role as manager of Mexico following their exit from the 2022 World Cup in the group stage.

Mexico defeated Saudi Arabia 2-1 in their final group match, but Poland advanced due to a goal differential edge.

In a news conference after the game, Martino said his contract had ended following Mexico's elimination.

"I am the first responsible for this terrible disappointment and frustration that we have," Martino said. "As the person in charge, it causes a lot of sadness, I fully assume responsibility for this great failure.

"My contract ended as soon as the referee blew the final whistle and there is nothing more to be done."