Olivier Giroud To Miss Next Three Matches After Headbutt 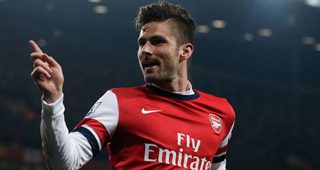 Olivier Giroud was sent off with a straight red card in the 53rd minute of Arsenal's 2-1 win over Queens Park Ranger for his hadbutt of Nedum Onuoha.

Giroud responded after being shoved by Onuoha and referree Martin Atkinson issued the card.

Giroud will be banned for Arsenal’s visit to West Ham on Sunday, to Southampton on New Year’s Day and the FA Cup third-round tie with Hull a week on Sunday.

“It was a deserved [red card],” said Arsène Wenger. “He didn’t kill him but he did touch him and Oliver Giroud knows he made a mistake. He told me he was pushed in the back – maybe the injury he had played on his mind. But it’s unusual for him because he’s normally in control, a calm guy.”