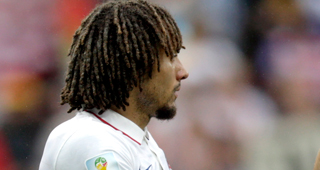 Jermaine Jones has received a six-match ban for bumping a referee during an Oct. 28th playoff match.

Jones also received an undisclosed fine from the MLS.

Jones was attempting to dribble past D.C. defender Sean Franklin while in the United penalty area when the ball appeared to strike Franklin in the arm. Referee Matt Geiger saw the incident but opted to play on rather than call a penalty.

Jones is a free agent and has been entertaining offers from overseas clubs, but he would have to serve the ban regardless due to FIFA regulations.