Joao Felix And The Promise Of Another New Atletico Madrid 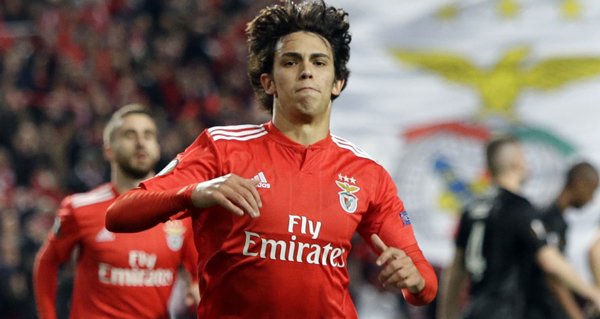 David Villa argued himself into circles in justifying the transfer fee that Atletico Madrid paid for Joao Felix, saying that while he hasn’t seen Felix play, he was certain that Diego Simeone’s side would not have paid $141 million to Benfica if they weren’t sure of his ability. The 19-year-old Felix, signed after finishing with 20 goals in 43 matches in his debut season for the senior side, represents the third highest transfer in soccer history. That amount is a dizzying fee for a teenager with that little first team experience, and even more so when considering who he is replacing as the second striker at Atleti. Villa brought down the expectations into tangible terms for Felix, adding that “you can fail, but if you leave everything on the pitch, people are happy.”

Effort and commitment is the baseline expectation when considering a nine-figure transfer fee. Simeone eschewed cleverness in replacing Griezmann and went straight to brute force economics. The signing is literally Simeone’s biggest gamble of his managerial career. Consider the five most expensive transfers in soccer previous to Felix in Neymar, Kylian Mbappe, Coutinho, Ousmane Dembele, and Paul Pogba. Felix has less first-team experience than Mbappe and Dembele when they both made their big money move. Mbappe was protected by Neymar and Edinson Cavani, Dembele by Luis Suarez and Messi. Felix may be a genius, but it could also take years to reveal itself. And by that time, burdened with the price tag, it may or may not be with Atleti.

Felix cannot hide, and there will be hardly a breaking-in period. He is immediately Atleti’s most creative player, and the player they rely upon to unlock defenses. Griezmann finished with 15 goals and nine assists last season, which is not impossible to replace in sheer numbers. Though Griezmann had four seasons of La Liga experience with Real Sociedad when he moved to Atleti in 2014 to become the side’s main creator. Before Griezmann was Villa, who was 32 years old during his lone season under Simeone.

“His characteristics are more near Kaka,” said former Swansea manager Carlos Carvalho. “The way he drives the ball, connects play, and his goals.” Carvalho added that Felix was further along at his age than Bernardo Silva, imploring us to “imagine what kind of player we are talking about.”

That imagination turned to tangible dominance reflected on a scoresheet during Felix’s breakout match against Luka Jovic’s Eintracht Frankfurt, in which he became the youngest player in Europa League history to score a hat-trick. That stat short changes him, as he finished with a hat-trick and an assist in Benfica’s 4-2 win, displaying his nine-figure characteristics. It was his through ball that got Benfica’s opening penalty. Then he hit a blast from outside of the box, flicked his header off a corner kick to the far post for a goal, and lastly, floated between Eintracht’s defensive lines off a counter attack and redirected the pass to finish off his hat-trick. That range of goal-scoring distinguishes Felix from his peers. Felix has the “rare ability to know where to be in front of goal,” said Rui Costa. After that match, Benfica manager Bruno Lage asked the media to let Felix enjoy himself and develop naturally.

Simeone has had difficulty in finding attackers suited to his side’s counter-attacking nature. He spent years trying to replace Costa after the striker left for Chelsea, only finding a suitable replacement in reuniting with Costa. In addition to Griezmann, Gelson Martins and Luciano Vietto also left the club this summer. Arda Turan put it simply when discussing why he wanted to leave Atleti despite his success, saying that he ran too much. So how would one create the ultimate Simeone attacker? It’d be a physical player both patient and tactical, able to press and sit back without the ball, who would then come to life on counter attacks, creating chances in adverse numerical situations all while covering long stretches of space. And regardless of his scouting profile and belief in his genius, how many 19-year-olds throughout the history of the game would you trust to carry the burden of their team’s attack?

“It’s not only that we became champions, we are changing the history of the club,” Simeone complained last month on how observers don’t appreciate how much Atletico Madrid have developed under his watch. Even more than their seven trophies, Simeone focused on the achievement of Atleti placing themselves amongst Liverpool, Inter, and Juventus.

Diego Godin, Juanfran, and Filipe Luis, three mainstays on Atletico Madrid’s 2014 title-winning backline, all left this summer. Griezmann is set to leave for Barcelona. Rodri, their passer from center midfielder who are supposed to be part of a stylistic rebuild into possession-oriented side, left the club after one season for Manchester City. Potential Godin replacement Lucas Hernandez exited for Bayern Munich. Simeone has previously added youth and referenced his side embarking on a new era in years previous, yet with only Diego Costa, Koke, and Jose Gimenez remaining from that 2014 team, there is no other choice. In his eighth season at Atletico Madrid, this summer represents Simeone’s most defining transfer window.

Atleti broke another club transfer record this summer. Their signing of Felipe Monteiro from Porto for $22.5 million represents the most they’ve ever paid for a defender. Though the most Atleti move they’ve made thus far was in replacing Rodri with Marcos Llorente from Real Madrid and Hector Herrara on a free from Porto. The ball-playing Rodri symbolized Simeone’s intent on playing more with possession, although that desire created an identity crisis. The box-to-box battling abilities of Llorente and Herrara harken back to that original era of Simeone that captured our imagination. One could have expected a larger uproar in Llorente moving across the two Madrid clubs, but the lack of controversy showed how the two sides are playing to different audiences: Real Madrid, with their global ambition, need players with an international following. Atleti need players to rebuild the Simeone style.

“We need someone who plays behind the striker, scores 20 goals a year and doesn’t cost much,” said Simeone when asked how Atleti would replace Griezmann. Such is his aura that we pretend he can mold any group of 11 players into his 4-4-2 shape, with its defined roles, and get results. A thought experiment over 2500 years old asks if you were to replace all of the original parts of a ship, whether it would be the same shape. A 20-goal scorer to replace Griezmann, check. A no-nonsense centerback to replace Godin, check. Two battling center midfielders that harken back to Gabi, check. If you replace the original players of the Simeone era with new players that have similar qualities as the players they are replacing, will it be the same Atleti as before? And will we, the audience, let Simeone develop his side into anything more than what we’ve seen in the past?