Searching For The Next Great European Striker In Luka Jovic 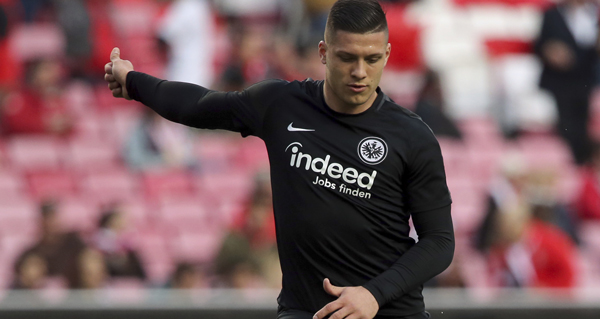 Not that Benfica needed any reminder, but Luka Jovic’s goal against them in the Europa League quarterfinal matchup would have gone the other way had the Portuguese club shown a little bit more patience. Jovic, who signed for Benfica in 2016, made just two senior appearances before going on-loan to Eintracht Frankfurt in 2017. And while the matchup pitted two of the most exciting prospects in Europe head-to-head in Jovic and Joao Felix, in a different lifetime, it would be Felix playing in Jovic on the counter. After losing 4-2 in the first leg, Eintracht would eventually go through to the semifinals on away goals. 49-year-old Eintracht manager Adi Hutter immediately played the underdog part, saying “we are perhaps the least anticipated semi-finalists.”

Jovic blamed his immaturity with his inability to adapt in Portugal. His loan move to Eintracht in 2017, and his subsequent development into one of the most sought after strikers in Europe, has taken on its own narrative of how to discover gems for a bargain price. The rising attention also showed the opaque world of third-party contracts. It was revealed that Jovic’s contract was not owned by Red Star Belgrade where he came through as a youth player, but instead bought by a club in Cyprus owned by a player-agent. Regardless, Eintracht made Jovic’s move permanent from Benfica last week for less than $8 million. Real Madrid, amongst other clubs, are rumored to be readying a bid of over $60 million this summer. Those numbers represent an over 600 percent profit on Jovic in a matter of months.

There are three distinct traits that showcase how seamlessly Jovic’s goalscoring ability could fit in the modern European game, each encapsulated by the goal against his former club: the number of goals he scores inside the box, the late-running nature of those goals, and that over half of those goals came off his first touch. He is not a scorer of spectacular goals, rather a striker who finishes his chances. His ability to arrive into the box and finish draws him comparisons with Falcao. In his breakout five goal game against Dusseldorf earlier this season, all 5 goals came from inside the box, with three off his first touch. If supporters - and Arsene Wenger - look to South America for that “extra” ability in a striker to create something out of nothing, Jovic defines the counterattacking efficiency of Europe.

Though they could not have imagined this success, Eintracht’s move for Jovic two years ago was based on an overarching plan from sporting director Fredi Bobic. Bobic, who was promoted to the position in 2016, rebuilt the side with a philosophy of giving second chances to former phenoms who hadn’t yet panned out. After all, even if Jovic had struggled this season, he still would be just 21-years old with time to build his value for a re-sell. Bobic’s long-term thinking was recognized as he was awarded Kicker magazine’s “Man of the Year” honor in 2018 for stabilizing the club in a “sophisticated, realistic, and straightforward manner.” Joachim Low described Bobic as “unpretentious, open, confident, clear, strong-willed, and focus” (and in continuing the multi-layered characterizations, Hutter has been called “courteous, reserved, eloquent, and thoughtful”).

In addition to Jovic, Bobic built Eintracht’s entire frontline from frugality (the club spent a total of $2.5 million in the 2016 summer transfer market, the lowest of any Bundesliga side). World Cup hero Ante Rebic signed from Fiorentina for $2.2 million. Bobic broke a then transfer-record in signing Sebastian Haller from Utrecht for $8 million. The three attackers, signed for a total of under $19 million, have combined for 40 out of Eintracht’s 58 goals in the league. On putting together Jovic, Haller, and Rebic for a cut-rate price, Bobic not only described the work and hours associated with the scouting process, but also the creativity, saying he needed “plenty of imagination” to complete the deals. As Kicker pointed out, his unearthing of talent was sophisticated, the price for the transfers realistic. The result is an opportunity to play in the Champions League.

Success is a paradox for a club like Eintracht (although that same idea could be applied to any club outside of the top global brands). Winning means attention from bigger European sides, which inevitably results in transfer moves for the players who brought that side their initial success. Eintracht are currently in 4th place in the Bundesliga. Even if they do make the Champions League, there is a chance that next season’s side bears little resemblance to the squad that got them qualified in the first place.

“We haven’t got a chance of keeping him,” admitted Bobic, on Real Madrid’s perceived interest in adding Jovic this summer.

Jovic’s father already claimed his son as a Madridista. Jovic would seemingly fit Zinedine Zidane’s desire to add directness to Real Madrid’s current approach. One could already imagine Jovic fitting into Zidane’s style in Europe of playing without the the ball and countering ruthlessly and non-spectacularly with it. At the very least, Jovic’s father says his son will not move to Barcelona, citing a lack of playing time.

Again, Eintracht operate within a realm of realism. The club are no stranger to upward movement, with Niko Kovac using his success to springboard into a move to Bayern Munich last summer. Bobic took that opportunity to hit out against Bayern, saying that the champions “lacked professional and respect” in poaching their then-manager. Bobic appears more prepared this time around. If not to Madrid, Jovic will surely move somewhere this summer. And then it may be Hutter’s turn to move one day. At some point, it stands to reason, the brilliant minds and musical chairs must come to some end. What happens when another European side comes for the one who embodies their practicality in Bobic?

That brain drain speaks to the Bundesliga as a whole. Its emphasis on developing young players is a calling card of the league, but that developmental approach extends to its managers and executives. Jurgen Klopp, Ralph Hasenhuttl, David Wagner and Jan Siewert have taken their high-pressing style to transform the Premier League. Former Dortmund sporting director Sven Mislintat recently left Arsenal after 14 months. Renewal is survival, both on the pitch and off.

Though Eintracht aren’t standing still. They opened a soccer academy in Michigan this year in an attempt to extend their branding on a global scale while continuing the trend of German clubs investing in American soccer. “We have to modernize in order to maintain our tradition,” said a board member of the move into America. It is a simple and obvious statement and sentiment, especially with how fast technology is changing the footballing landscape. Although, as Bobic said, one should not mistake that simplicity for a lack of creativity or imagination.