Eden Hazard To Real Madrid: A Transfer 20 Years In The Making 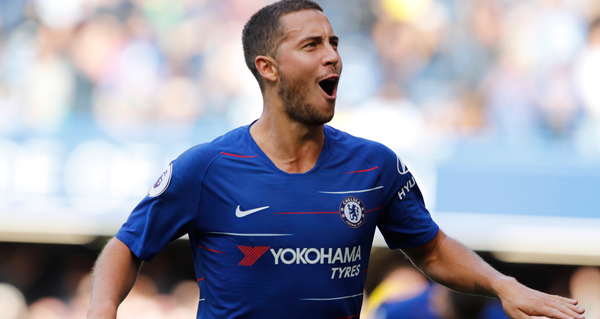 It was one of the worst-kept secrets in European soccer, with Zinedine Zidane and Eden Hazard openly praising each other in the media throughout this past season. Upon returning to Real Madrid and seeing out the rest of an otherwise apathetic campaign, Zidane said that Hazard was a player he “always appreciated” having followed his career from his Lille days. Hazard described Real Madrid as “the best club in the world” back in October even before Zidane returned as manager, adding that he’s been dreaming about playing for the club since he was a kid. The $113 million transfer fee paid by Real Madrid to Chelsea was merely a formality. With Hazard’s idolization of of both club and Zidane, the move was cultivated over the decades.

Maybe it was long-standing rumors, or a departing gift of a two goal, one assist Europa League winning performance in his final match with Chelsea, but there was an acceptance and inevitability of Hazard’s move. What more could Chelsea supporters have asked from a player after two league titles and 110 total goals? His involvement in 31 out of Chelsea’s 63 domestic goals was the highest proportion for any individual in the Premier League this year. After all, the now 28-year-old Hazard self-actualized during his seven seasons with the club. When Jose Mourinho returned as Chelsea manager in Hazard’s second season, Hazard’s father asked Mourinho to give his son “a little more ego.” Though changing a player’s natural personality was a failing mission from the start. By the time Mourinho left the club again in 2015, he thought that Hazard didn’t have the “necessary hardness” of an elite player.

But a lack of nastiness never got in the way of his ability to decide a match in one sequence. Hazard’s unique ability to turn a defender sparked its own semi-scientific investigation focusing on his core area. Hazard is listed at 5-foot-7 and weighs just over 167 pounds. His build represents a duality where he’s two inches shorter than the average Premier League right back, but also happens to be heavier than his average opponent as to not get easily pushed off the ball. His short stride due to his build allows him to touch the ball more often, enabling further control during his dribbles.

A physiologist concluded that the distribution of Hazard’s weight on the lower half of his body, reminiscent of Diego Maradona, is responsible for the effectiveness of his turns, pivots, and accelerations. Belgium manager Roberto Martinez observed that Hazard uses his shortness to get out of one-on-one situations with options unavailable to bigger players. Indeed, Hazard relishes playing against taller opponents, adding that “it’s very hard for them to change directions.” There is a science behind Hazard’s most inexplicable moments.

The trademark Hazard goal is one where he takes on several opponents, beating defenders not on speed or stepovers, but with agility, feints, and quick changes of direction from his short strides, opening up space that didn’t exist seconds earlier. There was one against Arsenal two years ago, where he picked up the ball at midfield and immediately beat Laurent Koscielny, displayed his muscular force in throwing Francis Coquelin to the ground, then put Koscielny back on his heels all without touching the ball before striking a decisive shot. Then earlier this year, with the match tied 1-1 in the 84th minute against Liverpool in the Carabao Cup, Hazard took the ball on the right wing, split two defenders with his dribble, turned left back Alberto Moreno around again, and unleashed a far post shot to win the match. It was all Hazard both times.

Hazard has the holy grail of footballing qualities, the one worth nine-figures: the ability to create a goal out of nothing. It is that individualism that Real Madrid missed throughout their uninspired 18-19 season. The collective play of Julen Lopetegui, who began last season as manager, was never going to be a cultural fit regardless of aesthetics or effectiveness of its short, quick-passing sequences. Real Madrid are a club of superstars exhibiting their singular genius. And while Hazard may be the best individual creator in today’s game, his move was essential for both sides in a much more foundation, primal way.

Florentino Perez may ultimately be the best storyteller in European soccer.

“Footballers with a unique talent like Hazard have formed our great history,” Perez said as Hazard was unveiled to Real Madrid supporters. “Our story must continue with the best players in the world and Eden is in this bracket.”

Not that Perez will need it, but there’s a long line of plaudits for Hazard throughout the European football community. Pep Guardiola said that Hazard is one of the best players he’s ever seen. Martinez went one step further, saying that Hazard is a star signing who will change Spanish football.

Cesc Fabregas added another layer in saying that Hazard could win Ballon d’Or with Real Madrid. That underlying context was that it’d be impossible for an individual to reach that recognition without the association of European club royalty. There are nuances at the highest levels: Chelsea are a successful club by any measure, winning five league titles and one Champions League in their modern era. But there is a level even beyond that with the Real Madrid’s and Barcelona’s, and those details matter in perception and in awards. Hazard didn’t even make the PFA Team of the Year for 2019 despite his dominance. He will automatically be in contention for individual awards just by his Real Madrid association alone.

Hazard doesn’t necessarily signal a rebirth, but more of a reminder of Real Madrid’s identity as they lost their superstar compass following Ronaldo’s departure last summer. With Hazard contending for individual awards and the team competing in Europe, Real Madrid are back in their rightful, star-driven approach to success. The attendance of 50,000 for Hazard’s unveiling was higher than four league matches last season. And while Maurizio Sarri lamented this week that it was difficult to build his demanding style around Hazard as his lack of tracking back caused defensive issues, there will be no such concern under Zidane. Hazard’s role with the club is to fulfill supporter’s dreams, to be enjoyed by the audience. Hazard, Perez concluded, will continue Real Madrid’s story of being the club where the best individual players in the world all want to play.

In coming back full circle, that story of genius is what made Hazard dream of Madrid in the first place. He recalls that his first memory “was when Zidane scored that volley against Bayer Leverkusen,” adding that he started watching football because of Zidane, supporting France over Belgium because of the midfielder. Perhaps in 20 years, the greatest player in European soccer from that era will force a move to Real Madrid after watching Hazard reach his individual highs with the team. Tactics change, eras change, but brilliance recognizes brilliance and ultimately, genius attracts its likeness. At least, that is the theory of Real Madrid.