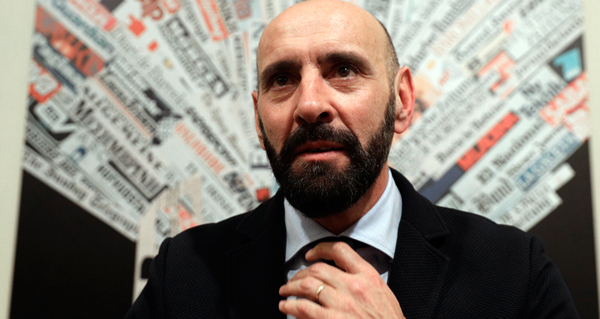 Javier Pastore was timing his run to stay onside as Cengiz Under chased down a through pass down Atalanta’s left flank into space. Pastore floated inside the box and gave a quick feint as Under cutback a cross in front of their opponent’s backline. With four Atalanta defenders in front of him, there was only one solution for the Argentine midfielder: a backheel slowly rolled into the far post. The viral goal was helped by technology meeting the moment with Serie A debuting to a wider American audience on the ESPN+ platform. And there were more goals. Atalanta hit three straight before Roma brought the game back level, with Pastore providing the service for their equalizer. That intensity caused manager Eusebio Di Francesco to break his hand while uppercutting his dugout.

After regaining his bearings post-match, Di Francesco criticized Pastore for disappearing outside of his signature goal, a common complaint that has held the midfielder back throughout his career. But that he was in a Roma uniform in the first place was surprising considering the source of the deal. The 29-year-old Pastore cost Roma just over $28 million, a fair price with his match winning ability. What was eye opening was that Monchi, who perfected the “develop young players and sell high” model at Sevilla, would look at Pastore as a transfer target in the first place.

In fact, Monchi’s biggest summer signing was another 29-year-old midfielder in Steven Nzonzi, whom he originally brought over to Sevilla from Stoke. He was a victim of his own scouting success in this case - he paid just over $9 million for the midfielder in 2015, then had to pay $30 million to bring him over to Serie A three years later, at the end of his prime. Like Pastore, Nzonzi’s class and calm on the ball belongs on any top team. Yet this wasn’t the Monchi we knew at Sevilla.

We wondered last season how Monchi, who made his senior side debut with Sevilla in 1990 and became their sporting director in 2000, would adapt to a new league and a club with ambitions in the Champions League on the field and a global reach off it. Yet the move to Roma also appeared as a journey of personal growth for the Spaniard who could have worked the transfer market at Sevilla for as long as he wanted, such was his immense reputation around Europe. But with lists filled with what Sevilla’s starting 11 could have looked like had they not sold their players, perhaps the missing challenge was in building a complete team, seen out to its full potential. As the Pastore and Nzonzi signings attest, Monchi has the freedom to build a side not only of youth prospects but include quality veteran pieces as well.

Although there were his trademark youth captures amongst his some dozen transfers this summer. His biggest on brand move, the signing we’ve seen him make time and time again at Sevilla, was in bringing the 19-year-old Ajax winger Justin Kluivert over to Serie A for just $20 million. Kluivert originally came into worldwide consciousness under the weight of his father but he quickly made his own name as an athletic winger with game changing 1-on-1 skill. He went against his father’s advice in choosing Roma instead of staying one more season at Ajax with regular playing time. The move seems to have already paid off as he made an immediate impact in his debut match. With the score tied late, he drove through Torino’s defense with burst and played in Edin Dzeko for his match winning goal.

As telling as the incoming transfers were in signaling a new approach, even more revealing is how Monchi dealt with three outgoing players - rather, stalwarts - in Alisson, Radja Nainggolan, and Kevin Strootman. As many have analyzed, how Monchi pushed out the aging Strootman and Nainggolan to Marseille and Inter against their desire to stay with Roma was a cold, efficient, Juventus-esque move, especially in contrast to how Francesco Totti was allowed to stay into his early 40’s.

As for Alisson, Monchi denied that the sale of his goalkeeper for a then position record $72 million was an example of Roma lacking ambition. He instead explained that he wanted to avoid the quick money approach that buried other Serie A clubs in the last two seasons to give Roma a long term viability in Europe. He points to the club selling Mo Salah, Antonio Rudiger and Leandro Paredes last season but then finishing third in the league and making the Champions League semifinals.

It is up to Di Francesco to make sense of his deep roster within the foundation of his 4-3-3 formation. Swapping Nainggolan and Strootman for Nzonzi and Pastore shows a move towards finesse and passing as opposed a direct physicality. Under and Kluivert add youthful pace and directness on the wings. Some combination of Nzonzi, Daniele De Rossi and Bryan Cristante will rotate at the base of midfield. Dzeko can still provide physicality and important goals, but 22-year-old Patrik Schick is their future striker. This side added nuance and lineup versatility compared to last season’s team built around Nainggolan’s energy and midfield bursts. If we are seeing a glimpse of what a Monchi side looks like from a long-term perspective, the key word is depth: depth in roster, and depth in styles to unlock a match.

Again, with the sporting moment meeting the television reach, now is as good a time as any for Roma to combine flair players with social media virality. We’ve heard rumblings of Serie A “being back” for a couple seasons, although that discussion is centered around modernizing a defensive style of play with high pressure and attack, especially influenced by Maurizio Sarri’s Napoli sides. Yet the summer of 2018 may be looked back upon as a pivotal summer for the league in terms of worldwide attention. Ronaldo’s signing brought immediate excitement and a global audience. The ESPN+ deal brought a wider access, resources, and emphasis within an American sports audience.

In reflection of Roma’s success last season, Paolo Bandini broke down the club’s process into three tiers: data, a new stadium, and memes. We’ve seen the importance of social media in building global engagement, especially with Juventus’ rebrand built specifically for the smartphone era. Roma president James Pallotta emphasized social media engagement, going so far as to poach Liverpool’s digital director Paul Rogers. The digital team’s breakthrough moment came during Roma’s 3-0 comeback against Barcelona in the second leg of the Champions League. That match displayed their ability to showcase timely memes, the energy of the moment, all culminating with an incomprehensible tweet so iconic that it came with its own behind the scenes, play by play (Rogers explained that it consisted of a banging the keyboard like the Kermit gif).

That match alone featured the top three most viral tweets for any football club in April. Pallotta made further headlines that same night by jumping into a fountain in the city center and promptly getting fined $280. He turned that moment around by donating $260,000 to repair another foundation in the city, thus showcasing a passion connection between club and the city, and the deep resources at Monchi’s disposal. All of this - the players, the charm of the social media account, the big European nights - added up to Roma being a football fan’s “second favorite” club. It showcased what a club could accomplish solely through charm, ingenuity, and understanding the moment.

Roma’s goal is to be the most fan-connected club in the sport, an important distinction compared to Juventus’ goal for global branding dominance. One is a ground up, grassroots vision, the other a top down approach, each fitting the personality of the club. And while the quality and excitement of Serie A may be back, this moment of global reach through television and social media is still newly processing. Roma’s match against AC Milan is labeled as the American derby. Tweet after tweet, back heel after back heel, undervalued signing after undervalued signing, Roma push the boundaries of the modern sports fandom through a holistic approach. There is the game on the field augmented by the game on social media. And through our smartphone screen, the dog and the tail mold into one.