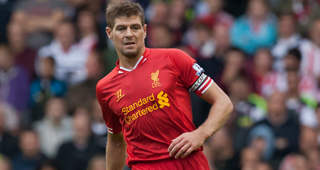 In an interview explaining his decision to leave Liverpool for the Los Angeles Galaxy this summer, club captain Steven Gerrard says that if he had met Brendan Rodgers when he was 24 years old, they’d be reminiscing over all the trophies they’d have won together.

Gerrard’s Champions League and FA Cup trophies are nothing to scoff at, but he was never able to deliver Liverpool the Premier League title and return to glory it so badly desired (insert “ship” jokes here). And those questions lead to whether Gerrard, as part of a “Golden Generation”, lived up to his full expectations - or even if those expectations were warranted in the first place.

Let’s cut back 10 years, to the 2004-05 season, when Gerrard was 24 years old. It’s an appropriate time frame. After all, it was that season, specifically during the Champions League tournament, when Steven Gerrard developed into a transformational player, and became neck and neck with Kenny Dalglish as the most beloved player in club history.

That 2004 summer represented the beginning of the modern Liverpool side, starting with Rafa Benitez replacing Gerard Houllier as manager. Michael Owen left for Real Madrid, leaving Gerrard, the local boy, with a chance to fill his void as the symbol of the team. Xabi Alonso and Luis Garcia were brought in by Benitez, providing Gerrard with structure at midfield to become a hero.

There’s specific moments or goals embedded in our minds that announces a player to the world (and in my case, a small corner of Baltimore). I don’t recall how Gerrard was particularly rated before then, as he averaged over five goals in his previous five seasons as professional. But I imagine there was more than enough local pride and emotion attached - and the impossible expectations that come from that.

You can pinpoint the exact moment Steven Gerrard became Steven Gerrard: it was this goal against Olympiacos in the final game of the Champions League group stages on December 8th, 2004, in the 86th minute, backed by that call from Andy Gray, to get Liverpool through to the knockout round. The European stakes, the home crowd, the late drama, and the manner of the unstoppable volley from 25 yards that became his trademark collided as one.

It’s a moment that grows with every retelling (or YouTube viewing), for better or worse. Gerrard’s burden for the next 10 years was nothing less than to save Liverpool.

I returned home for winter break two weeks later. And while the Gerrard hit was spectacular, my most randomly vivid memory of Liverpool was a 5-0 win against West Brom two weeks later. It was an innocuous Boxing Day match, especially with Chelsea dominating their way to their first league title in 50 years. But it represented Liverpool’s biggest win of the season, and displayed the side at their most dynamic: John Arne Risse’s reckless runs and hellacious left foot, Luis Garcia’s nose for goal, and of course, Gerrard driving the attack. I was hooked.

It was also a familiar theme in the Benitez era, that of Liverpool struggling in the league but advancing in Europe. They handily defeated Bayer Leverkusen in the round of 16, which may have been the last time Liverpool supporters could breathe easily under Benitez in the Champions League.

The next round against Juventus was the first time the two sides played each other since the Heysel Stadium disaster. The second leg in Turin was as notable for pre-match emotions as much as what would take place on the field - a 0-0 draw, which gave Liverpool the aggregate. The entire match was Xabi Alonso’s own “Olympiacos moment”, as he returned from a broken ankle to control play as only he can.

In fact, that season also belonged to Jamie Carragher, and each of the three player’s rise was reflected through the nature of their position. Gerrard, the attacking midfielder, getting the glory of a season saving goal. Xabi Alonso orchestrating a single match by himself with calmness, intelligence, and class. And Carragher, the center back, whose ability could only be appreciated through the consistency of an entire season.

The semifinals against Chelsea and Mourinho foreshadowed the plodding, controversial, and often boring play between the two sides over the next several season. The second leg featured a goal that may or may have gone in, and a point blank miss from Eidur Gudjohnson late. Somewhere between early December through May, Gerrard, Carragher, Alonso, and a legion of supporters old and new all over the world were coming of age in their own way.

The biggest criticism of Gerrard throughout his career was of his anachronistic style, as the box to box, all action midfielder was phased out by the specialization of the modern game. Sure, Gerrard could cover 50 yards, and tackle, pass, and score with equal aplomb. But the era belonged to Claude Makelele, who seemingly took pride in how little he had to move, in camping out in a specific area, and was so effective and influential that the position literally became his own.

The very best and very worst of Gerrard’s play appeared in the Champions League Final match against AC Milan. Gerrard’s positional indiscipline gave Kaka and Crespo room to go into half-time with a 3-0 lead. But Gerrard’s incessant energy and drive lead to Liverpool’s first goal, and the penalty to tie the match six minutes later.

Gerrard then moved to right back in extra time, leading to this memorable tackle against Serginho. He not only showed he could win matches at the highest level of Europe, but could seemingly play any position (he had his highest scoring season playing right wing).

That energetic, “jack of all trades” style probably kept Gerrard from ending his career at Liverpool. He never fit into a proper role like contemporaries like Paul Scholes or Ryan Giggs - or Makelele, for that matter. Once his legs and energy were gone, so was the destruction. Rodgers fit him into a deeper role last season with bouts of success, but that’s not Gerrard. He was, above all, with the proper structure of a Mascherano, Alonso, Lucas, or Hamann behind him, a match winning piece. But he was never meant to be Mascherano, Alonso, Lucas or Hamann himself.

So yes, perhaps if Rodgers’ intellect combined with a dynamic 24 year old Gerrard, he’d have tinkered with a formation that made brought his pinging cross field passes and trademark runs to a higher level, and they’d both be drowning in a tub full of medals. But ten years ago, Gerrard had another tinkering manager who brought him European success, planting the seeds of a future club legend. And I wouldn’t take this for granted, either.