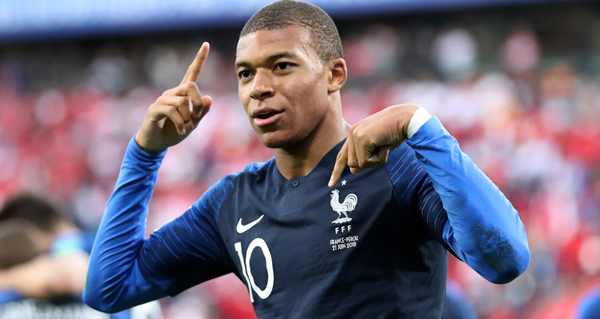 The mistake resonated across generations, with even Pele tweeting Kylian Mbappe words of encouragement following his penalty miss that knocked France out of the 2020 Euros in the round of 16. It was Mbappe’s first sporting trauma on the international stage, and the first time we saw his previously undefined talent hit a limit. From that perspective, Mbappe’s miss was almost inevitable as we’ve been conditioned to expect our signature athlete’s to somehow fail on a grand occasion before their eventual redemption. Didier Deschamps added that the striker was “very affected” by the miss, with Mbappe tweeting an apology afterwards.

“Tomorrow is the first day of a new journey,” added Pele.

It wasn’t just the penalty miss as Mbappe didn’t score in the entire tournament and logged just one assist. The advanced stats were more forgiving, with Mbappe currently ranked fourth in Expected Goals and second only behind Cristiano Ronaldo in Non-Penalty Expected Goals plus Expected Assists (interestingly, only Alvaro Morata and Pablo Sarabia’s Spain went through to the quarterfinals out of the top ten). His lack of production invited an overarching referendum on the current state of Mbappe: former PSG striker Jerome Rothen said that Mbappe’s ego had become “problematic” and uncontrollable for Deschamps.

“Is he aware that he does not have the class of some in the group on set pieces?” asked Rothen. It was not the first time someone suggested Mbappe thought himself better than he actually was. Former World Cup winner Emmanuel Petit accused Mbappe of being too “Neymarized” earlier in the season, saying that Mbappe “wants to do what Neymar does on the pitch when he does not have the qualities of Neymar at all.” That’s not to mention the public row he got in with Olivier Giroud on the eve of his tournament, with Giroud suggesting that no one passes him the ball on his runs.

And yet, Mbappe still produced 27 goals and seven assists in 31 Ligue 1 matches this season. Those stats lack context, but there were glimpses of quality throughout the Euros. He showed off his playmaking in between the lines in the loss to Switzerland, first on this pass that led to Karim Benzema’s Dennis Bergkamp-esque touch, then minutes later with a backheel that freed Antoine Griezmann inside the box. The skills displayed the actual secret to Mbappe’s game in his footwork, close control, and imagination in tight areas outside of his obvious pace. Of course, we didn’t see this Mbappe enough. But unfulfilled potential cursed the entire squad, with Deschamps’ side content to sit back and win matches in spurts and moments through their superior individual quality.

Yet going through a penalty miss trauma in front of the world is part of a soccer hero’s journey. Cristiano Ronaldo had to miss in the 2008 Champions League Final (though Manchester United eventually won the title) to come full circle and seal the European trophy with the deciding penalty against Atletico Madrid in the 2016 final. Lionel Messi briefly retired from the national team following his penalty miss against Chile in the 2016 Copa America final, with Sergio Aguero saying “it was the worst I have ever seen him in the dressing room” following the match (we still await his penalty redemption).

The tension is in the inevitability of a penalty kick: it’s only 12 yards between the penalty spot and a goal, with just a keeper at a taker’s mercy. In a game of clean sheets and 0-0 draws, scoring is the default setting on penalties. Research places a penalty at somewhere around a 71%-80% success rate depending on the context. There are debates as to what the perfect penalty entails - where to aim for the bottom corners, top corners, or down the middle - as well as the how - do you pick a spot before the penalty or play off the keeper’s movement. That’s not to add in the external pressure of knockout competitions with legacies waiting to be written. These factors elevate this simple act into the realm of game theory and psychology, all in front of hundreds of millions watching around the world.

Thus, a missed penalty is not a failure of skill. It becomes something deeper around a lack of nerve that reveals one’s internal character, that we know something about their psychology and nature. The most extreme example is Roberto Baggio’s miss in the 1994 World Cup Final, an association that follows him almost 30 years later (as one headline reads, forget the miss - he was a divine). So when Ronaldo told Zinedine Zidane in 2016 to “put me as the last taker,” the confident knowing elevated him beyond the ordinary (it was some distance from his 2008 miss, when he feared it would be “the worst day of my life”).

But there is also a different type of tension that builds from the unrealism of perfection, especially within the current social media age that encourages venerability. Mbappe’s diaristic, direct apology was a tool of personalness that Ronaldo didn’t have access to in 2008 (could that also have humanized Baggio’s miss?). If all we knew of Mbappe was the outrageous goals and skills from social media each weekend due to the lack of Ligue 1 coverage in America, now we know that he is actually fallible - for the better.

The cycle happens to every phenom, and it will happen to Erling Haaland on some occasion. But the blemish isn’t necessarily a negative to avoid, just a part of how we’ve experienced stories since the days of myths. After all, how can we root for perfection? Missing a penalty at 22 years old isn’t a finality, but rather, a new beginning.

Mbappe’s redemption act could feature his long-rumored move to Real Madrid. In a way, the penalty miss adds an extra incentive to joining Madrid as we could get used to watching Mbappe every weekend in La Liga as opposed to only seeing him in the Champions League as currently structured. By staying on the front pages of Spanish newspapers, there’s an opportunity to refocus the dialogue to the everyday challenges of playing for the most successful European club in the world. He could use the aura and history of Madrid as a tool to transcend something as frivolous as penalties.

A new Mbappe signals space for new stories. He already has a career’s worth of achievements in his first five seasons, including winning and scoring in a World Cup Final. But we also have heard more of Mbappe than have actually seen him play, making his greatness easy to take for granted without close inspection. Mbappe scored another stunner? That’s just Ligue 1 quality. Another assist to Neymar? Well, that should be the baseline. There were no nuanced layers. We always knew Mbappe was world class, but now he has a familiar narrative that invites us along with him.