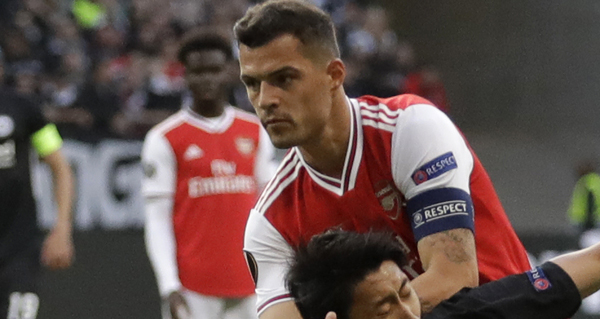 The Swiss were huddled around Vladimir Petković, looking for confidence their affable redwood of a manager was happy to transmit, speaking with his entire chest, and then around Granit Xhaka, who ground his fist into his palm and made them angry. They cursed and howled and shoved each other. Haris Seferović, coursing with dark energy and courage a pair of headed goals, slapped his strike partner Breel Embolo in the face.

Meanwhile Didier Deschamps was still annoyed with Kingsley Coman, who had spent most of extra time playing through a thigh injury that rendered him nearly immobile. The French tried to steel themselves to rescue a game they were supposed to win comfortably, that they were winning comfortably until Seferović scored in the 81st minute and Mario Gavranović equalized just before the full time whistle. To reengage, which the Swiss didn’t need to do. They’d been locked in all evening. There’s no good way to go into penalties. Everybody feels sick, they’re thinking what if I’m the only guy who misses? It probably helps to be scared and belligerent, rather than scared and annoyed, scared and vaguely embarrassed. Or maybe it doesn’t. You have to be careful about learning anything from a shootout. At any rate, there were nine successful penalties and then Kylian Mbappé missed the last one.

It was a memorable match, rich with enduring images, but what I keep coming back to is Xhaka, who didn’t even take a penalty in the end. His only contribution to that part of the game was skulling a Coke and losing his voice psyching his teammates up. That’s their leader; the Swiss trust him completely. Outside of that squad, he’s a bit of a joke. This tends to happen to Arsenal players, if they stick around long enough. Touted as a hard-tackling orchestrator, part Pirlo and part Khedira, when he arrived in London five years ago, he hasn’t lived up to the lofty hype and has seen his better qualities subsumed by lowlights of his brain short-circuiting. Wild challenges like flying elbows off the top rope, backpasses that turn into through balls for opposing attackers, press-breaking maneuvers that go wrong almost immediately. To overgeneralize, soccer fans are a cruel and supercilious species. They look for reasons that a player Actually Kind Of Sucks, and Xhaka’s inconsistency has provided ripe material for those arguments over the years. But the truth about him is that he’s a very talented midfielder who’s well-liked in the locker room. He can control games if you let him. And yes, he occasionally loses his mind.

He’s the best the brave bankers and chocolatiers of Switzerland have got, and on Monday he was one of the best players on the pitch. He had full command, of himself and the match. France didn’t hassle him in the middle of the park, and when Xhaka has space, he uses his left foot like a chef does a spatula. He put the ball right where his teammates wanted it for 120 minutes, looping it out to the fullbacks and finding forwards dropping between the lines. That last, gorgeous Gavranović goal came from a perfectly angled Xhaka pass that erased the French midfield and put the Dinamo Zagreb forward in a position where all he had to do—not easy, but evidently not impossible—was shimmy around Presnel Kimpembe and find the back of the net. This kind of expansive dominance isn’t something we see out of Xhaka at Arsenal, where he’s part of the machine rather than its beating iron heart, and it’s a fine example of what makes international soccer great: we get to watch merely good players become heroic ones. Andriy Yarmolenko for Ukraine, Patrick Schick for the Czech Republic, et al. Tournaments like the Euros function as an exploration of what the gifted but not quite great are capable of, when they’re asked to do everything.

And when they deliver, it’s special. The flags, the anthems, the crying, the emotional charge in these performances is immense, and more than that, they encourage you toward a more generous reading of the game and its players. The skeptical elitism, like it’s Neymar or nothing, Bayern Munich or mediocrity, runs out of you and you find yourself in a heightened state of appreciation. Able, finally, to feel. For a while, Granit Xhaka was untouchable, and in that huddle, he was giving the Swiss takers the strength to beat Hugo Lloris as many times as they needed to. They weren’t going to lose that shootout. No, they definitely weren’t.

Of course, they could have. Most players, French and Swiss, looked like they wanted to die as they stepped up to the penalty spot. Kylian Mbappé wasn’t one of them. He’s played in much bigger matches than a round of 16 Euro tilt. You figured he’d matter-of-factly roll the ball into a corner and the excruciating exercise would continue. And maybe Xhaka would have to convert a try rather than cheering on the others. It’s possible he would have missed. Then what would we say?

What actually happened is much better. Xhaka’s made plenty of high-profile blunders. Let him have one glorious, unspoiled day. He’s leaving Arsenal this summer, to go play for José Mourinho at Roma. Mourinho has always liked him. Fawning words, from two years ago: “Granit Xhaka is the main man in the entire Arsenal midfield, you can't see it unless I lend you one of my eye. Without him, Arsenal is lost. He is a leader. Remember, mistakes are made by humans.” Perhaps he’ll live up to that assessment in the Italian capital, but that would be expecting a lot. For now, Xhaka is exactly what Switzerland need him to be. This, by itself, is enough.