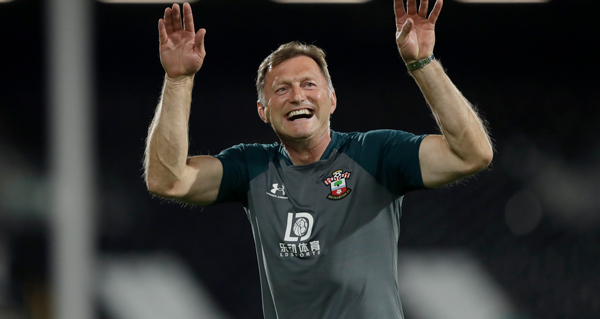 Southampton right back Kyle Walker-Peters pressed Miguel Almiron outside Newcastle’s penalty box in the seventh minute of their most recent match just long enough for Theo Walcott, who returned to his boyhood club at the start of this season, to tackle away the ball and pass to Che Adams in front of net for the game’s opener. Later into the match, with Southampton holding the 1-0 lead, Walcott lost the ball inside Newcastle’s box, to which midfielder Stuart Armstrong pressed, recovered the ball, and scored all within five yards of the penalty area. The 2-0 result meant that for a brief period, Southampton topped the Premier League table for the first time in club history.

Though Southampton manager Ralph Hasenhuttl said before the match that he’d prefer his side to fly under the radar, adding that it’s more fun to be a pirate “than to join the navy.” The outsider image suits the 53-year-old manager since we mostly know him through the power of brand association. An Austrian manager with a philosophy built upon a high press and direct play: guess what soccer conglomerate sponsored by an energy drink he developed in?

On cue, he was described as the “Alpine Klopp” when he first arrived in the Premier League. Echoing overarching ideas from the pressing doctrine, he said that the “best playmaker is the ball winner,” adding how “our game starts when the opponent has the ball.” He evoked the NBA-ization of soccer in his desire to score within “10 seconds” of winning the ball (whether 10 seconds or 12 seconds, the ethic remains). Yet even in introductory interviews after taking over a Southampton side in the relegation zone midway through the 2018 season, he dropped little hints of his worldview in describing how “it’s better to be incognito.”

The desire to be under the radar implies that one has a position to be overlooked from, which was not necessarily guaranteed. In another example of our frayed relationship with time, Southampton's infamous 9-0 loss to Leicester City took place just over a year ago. The result was tempered by an early red card, which is especially significant to a pressing team (to press with eleven players is risky in itself, yet to press with ten players?). But still, it would have been easy to sack Hasenhuttl after the result. There were easy excuses over the gimmicky nature of a press, and how lower budget sides are better equipped to sit back with ten players behind the ball and counter attack.

“If you lose one match 9-0 and you still stay alive, you lose any fear you have,” reflected Hasenhuttl, months after the loss, in safer standing, about the fear of getting sacked after what was the largest defeat in club history.

Hasenhuttl would earn his turnaround, especially in navigating results post-league suspension. Southampton won five out of nine matches once the league resumed, and would have finished in third place had those results held out over an entire season. Just nine months following the historic loss, Hasenhuttl was named the manager of the month for July after closing out the year with three wins and three ties.

Thus, their current form is no surprise considering the short offseason. And similar to Klopp turning over Liverpool’s roster, Hasenhuttl’s eventual success shows the importance of long-term backing to develop a pressing side. Hasenhuttl and Klopp are intrinsically linked beyond their preference for pressing. They were born in the same year and worked on their coaching badges in Germany at the same time. Klopp admits their similarities of how “we love a good organisation, pressing, counter-press, transition,” with Hasenhuttl adding that he and Klopp “want to play a high tempo game, we want out guys to spring around, press well.” But shouldn’t  Hasenhuttl also exist on his own merit?

One cannot have it all, between flying under the radar and getting overshadowed by a young, brash manager, as he did in leaving RB Leipzig in the summer of 2018. Hasenhuttl left the club following a sixth place finish, with reports of Leipzig agreeing to a deal with Julian Nagelsmann to take over in the 2019 season. It was Hasenhuttl’s “explicit wish” to leave the club immediately in lieu of a lame-duck year. So this became his public identity, rooted in relation to others; not quite on the level of Klopp, but also not as new or exciting as the upstart Nagelsmann.

On the other hand, being in the middle of Klopp and Nagelsmann is still something of a compliment. And there are distinctions between their pressing and attacking styles. Hasenhuttl is rooted in a blocky 4-2-2-2 shape focused on outnumbering opponents narrowly, as opposed to Klopp’s signature 4-3-3 and Nageslmann’s shape-shifting, three centerback formation. Nagelsmann is the most focused on possession out of the group. Klopp would be the most pragmatic, though that could also be a product of roster quality with Liverpool able to call upon individual quality to create goals out of nothing.

Attacking principles are overshadowed when discussing a press. Hasenhuttl has a track record in developing direct, pacy strikers, including Timo Werner at Leipzig and leading Danny Ings to a 22-goal season last year. Interestingly, Hasenhuttl’s attacking emphasis isn’t on the striker, but in between the lines midfielders who deliver the final ball to Werner and Ings. He often refers to the space in front of an opposition back four as the “red zone,” with his shape automatically placing two attacking midfielders in the area to draw out defenders and create space for the final pass.

Following the win against Newcastle, Hasenhuttl complimented Walcott’s work in the “red zone,” pointing out how effectively the now 31-year-old striker combined with midfielders Moussa Djenepo and Armstrong.

“I think it means something to play for his old club,” added Hasenhuttl about Walcott’s return to Southampton in October after fourteen seasons away.

There was a meme that started in the middle of last decade of how Liverpool kept signing players from Southampton. There were ultimately six transfers moving from St. Mary’s to Anfield since 2015, ranging in success from Nathaniel Clyne, Adam Lallana, Rickie Lambert, and Dejan Lovren, leading to Sadio Mane and Virgil van Dijk.

And a decade before then, there was Gareth Bale and Walcott himself. Considering the list, Southampton may genuinely have the most impressive list of academy graduates in England. The movement also included managers like Mauricio Pochettio, so it was only a matter of time before rumors began circulating around Hasenhuttl. One day, it’s to replace Ole Gunnar Solskjaer at Manchester United, or Frank Lampard at Chelsea the next.

While we can study Hasenhuttl’s system endlessly, we also know that managing a big club is about placating superstar personalities even more than tactics. But Hasenhuttl may have built his career the right way when it came to perception. He’s linked to top clubs not through any public branding, but with substantive results. The journey might have taken longer, but this way, he’s making the big clubs conform to him, to seek him out specifically for his high-pressing style. Against his wishes, he actually might be defining himself not in comparison to more well-known managers, but under his own circumstances.