Mikel Arteta, Jose Mourinho And The Missing No. 10s 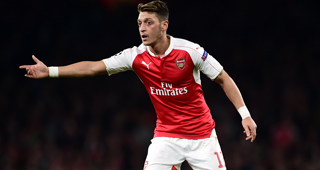 “We need every player to contribute to the defensive aspect of the game as well as the attacking aspect,” backed Brendan Rodgers on Mikel Arteta’s decision to leave Mesut Ozil out of Arsenal’s 25 player Premier League roster. Rodgers dug further, adding that while Ozil is talented, you “have to be a working talent.” It’s rare that a manager will single out an opposing player by name, especially considering Ozil’s off-field controversies that may have influenced his exile from the squad.

But something was in the air. Later that week, Jose Mourinho kept Dele Alli completely out of his squad against Burnley. There are different reasons for why Alli and Ozil were kept out of the lineup, but the move had been coming for both players. We’ve debated the demise of the No. 10 throughout the years. Though we continue to see the evolution of how modern sides create chances through athleticism and the “work” of an entire team over relying on one individual.

It was the player - not the tactics or the era - that led to Alli playing just two of Tottenham’s opening 11 matches, according to Mourinho. He turned back the blame on Alli, saying “if a player is not motivated, we can’t do much.”

We thought that Alli would benefit the most out of Tottenham’s squad with Mourinho’s hire, drawing comparisons to other players who played the role under the Portugeuese manager including Wesley Sneijder and Frank Lampard. Alli wouldn’t just be a number 10, but Mourinho’s Platonic ideal of an 8-and-a-half on defensive and a 9-and-a-half in attacking the box with late runs. It is telling that Mourinho not only chose not to replace Alli’s role in the transfer market, he also oversaw the transfer of Tottenham’s other creative midfielder in Christian Eriksen.

And yet, without any traditional creator, Tottenham have scored the most goals out of any Premier League team this season.

There are clear tactical reasons why No. 10s have been phased out in today’s game, though we add nuances each season in how teams manipulate shape and structure with a focus on overloading space to create chances. Jurgen Klopp’s declaration that gegenpressing was the best playmaker in the world foresaw an industrial age-esque production line taking over individual variance. With a basketball-inspired emphasis on verticality and transition, athleticism and speed overtook technique and creativity. Goals are scored through the brute force of a hammer than the subtleties of picking a lock. The idea of creating chances after turnovers forced teams to build possession through the wings - where teams could press using the sideline if they lost the ball - rather than up the middle, where playmakers roam.

And it’s not that playmaking has completely disappeared, but more that the responsibility has been dispersed amongst various positions. Every player must carry their weight (similar to a demise of pure playmakers, there is something in the decrease of players who can only defend). Kane already has eight assists on the season, more than the past three seasons combined. He and Son Heung-min have combined for 13 goals on the season, also creating a viral moment with Son asking Kane if he assisted his lone goal against Burnley. The duo present a template for goal-scoring and chance creation through physicality and speed without a No. 10. Kane said that he’s able to pick up the ball deeper in midfield with wingers running in behind defenses (a facilitator role that the likes of Firmino and Karim Benzema perfected). As importantly, Son’s pressing ability makes him just as effective when Tottenham lose the ball.

“Harry is probably not always the No. 9 because he gets into some areas that allows Son to also get into different areas,” said Mourinho of Kane’s assists. The comments show the nuances of how modern players must transcend singular roles. Traditional jersey numbers no longer capture the entire story of today’s roles. Wingers can’t just cross, they must score goals. Goal scorers must also be the first line of pressing. Fullbacks must create in addition to defending. Centerbacks and goalies must be as comfortable on the ball as they are reading opponents. The modern player must press, dribble, create, and score, with the physicality, speed, and athleticism to match.

But where, if anywhere, are 10s thriving? Even articles about the demise of the No. 10 are decreasing as we move on to analyzing structure. Coutinho has shown glimpses of the role with Barcelona early in the season, though it’s telling that he was second-choice to Thomas Muller in the No. 10 role at Bayern Munich. And it feels right. Bayern would be limited by relying on one player to create at the expense of their bludgeoning, intense style with speed and goals coming from every angle.

No matter how much we love the aesthetics of a playmaker, it is just one paradigm. The idea of a “singular genius” can also be its own form of gatekeeping and excuse for misbehavior. From that perspective, the current style built around collective athleticism doubles as a response to the cult of personality in soccer in exchange for egalitarian voices.

But some No. 10s have readjusted their games for the wing. James Rodriguez moved to the right of a 4-3-3 formation, which is as much defensive protection a player can have with three midfielders and a full back behind him (“football is now monotonous, everything is 4-4-2, 4-3-3, and football is run, run...football is always the same, midfield, run, midfield, run,” Rodriguez lamented to Rio Ferdinand). Atalanta’s Papu Gomez starts on the left wing of a 343 formation and cuts inside to create, though he has the protection of two center midfielders and three defenders behind him, in addition to his own workrate. Rodriguez and Gomez are examples of players who don’t occupy No. 10 attacking spaces, but instead arrive in the area for their definitive moment, then vacate back to their original position.

Still, they had to adapt their approach to modern structures rather than fully expressing their natural ability. And there remains a feeling that creativity must be hidden amongst grafters, runners, and tacklers.

There are other compromises. Before Bruno Fernandes’ move to Manchester United last winter, his former manager Carlos Carvalho implored that Fernandes is not a No. 10 but a No. 8 who has “developed that ability to break the line of the defence to score goals.” Even Rodgers molded James Maddison out of his instinctive No. 10 role into a creative No. 8. Nothing expresses how mechanized the modern game has become than players themselves shedding the creative label. You’re either a hard runner who creates, or the creator who can press. But you can’t have it all.

Do you remember the excitement when Arsenal signed a then-24-year-old Ozil in 2013, breaking their transfer record by over $35 million? It wasn’t just about the on-field creativity, but in the symbolism of the club still able to attract world class players. Ozil was reportedly swayed by Arsene Wenger’s possession-based attack, with Wenger viewing Ozil as a foundational piece to build his style around for the next generation.

That was an era when we believed one player could transform a team, but maybe analytics has also stamped out that illusion as well. There’s always another player with similar stats somewhere in the world. And even Wenger turned on Ozil by the end, saying that “playing without the ball wasn’t exactly his forte” while adding “athleticism has become more important than technique and decision making.” Ozil’s agent said that his client deserves an honest explanation for being left off the roster with Arsenal executives sticking to the line of “performance issues” as opposed to any other pressures. Ozil would much prefer that he’s not playing due to controversies from the past year when the other explanation is that his skills no longer have a place in the contemporary game.