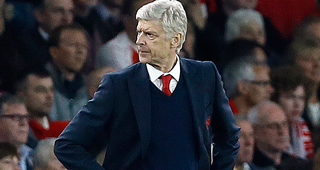 “The moral values I’ve learnt in my life I’ve learnt through football,” Arsene Wenger once said back in 2010. “As a club we have an educational purpose, to give back to those who love Arsenal so that they learn moral values from our game and how we behave.” Already bearing the weight of the responsibility between soccer and humanity, Wenger’s post-Arsenal transition as FIFA’s Chief of Global Football Development appeared a seamless move. And while we could take the title as a figurehead role for someone of his stature, Wenger recently documented four on-field changes he’d want to implement in the game. From tweaking the offside rule to favor attackers to replacing throw-ins with free kicks late in matches, his ideas range somewhere between adding excitement or chaos.

How many contemporary figures would you trust to represent the everyday supporter’s desire for emotion and transcendence in the face of corporate control? Wenger said his goal for suggesting rule changes was to make soccer “quicker and more interesting” to create a “more spectacular game.” He has pushed back against the idea of increasing speed in the past, comparing soccer to the NBA with its endless fast breaks. And he has addressed the impact of even small rule changes, saying how letting players receive goal kicks inside of the box “has profoundly changed play.”

“The real playmaker now is the goalkeeper … instead of looking to play as quickly as possible in the opposition half, you are looking to create space inside your own box. This has created dangerous situations because teams press very hard, so well that they leave a lot of space. And this rule, which was innocent at the start, has profoundly turned the game upside down,” explained Wenger.

Regardless, we trust the now 70-year-old Wenger. His quotes about the transcendent importance of soccer in one’s life run as deep as any manager or player. He once said that “the only way to deal with your life is to transform it into an art, every minute of your life. Football is an art.” Currently on a book tour for his autobiography, he described how “when you’re born, your first instinct is to survive. Then you must find the meaning of your life. My life is football.”

But finding meaning in the game wasn’t just a selfish pursuit. In describing the relationship between art and audience, Wenger describes how “when the supporter wakes up in the morning, he has to think: ‘Oh, maybe I’ll have a fantastic experience today!’ He wants to win the game but as well to see something beautiful.”

That type of idealism defined Wenger’s career, to a fault. There was no such thing as turning to pragmatism to win matches. In keeping his morals through the latter stages of his career at the expense of results, he approached a tragic Greek figure. Yet in contrast to romanticizing a sport defined by binary results of success, played by millionaire professionals, with billion dollar brands at stake, our expectation for a leader change when one is asked to protect the morality of said sport.

We inherently trust Wenger to hold his principles. He was not only once a tactical innovator, he did so with beauty and aesthetics in mind. With a career spanning both sides of social and digital media, Wenger was one of the earlier voices in emphasizing playing style in addition to results. We can imagine the endless retweets his early Arsenal sides would have inspired. His philosophy was ahead of its time.

To imagine the Premier League that Wenger came into in 1996 seems even further away than the 24 years suggest. Today, we are firmly in the Premier League-centric age of global brands. After Premier League sides spent over $1.3 billion in the transfer market during a pandemic, we wondered whether the league was recession-proof. Wenger, and his generation of one-club managers, experienced this growth firsthand. Combined with the reach of television, that mid-2000s era turned the Premier League into the center of the footballing media world.

One of Wenger’s initial innovations when taking over Arsenal was replacing chocolate bars and burgers with fish and steamed vegetables in the team cafeteria. In our current era of individual brands and billionaires, those were the innocent days. His nickname of “The Professor” seemed like a backhanded compliment, creating distance between his reserved authority and the supposed rough-and-tumble nature of how we viewed the sport in the 90s.

Wenger’s background in economics became part of the story of his squad building. He emphasized academy and youth development due to the low or non-existent transfer fees before selling players for high-percentage returns. He implemented his own style of Moneyball before the term came into pop culture popularity.

It is some coincidence that Wenger released his autobiography during the same week as the failed Project Big Picture idea, a plan led by Liverpool and Manchester United to help fund the English football pyramid. Seemingly going against his romanticism, Wenger said that the pyramid could no longer support all 92 clubs as the “modern fan supports the national team, supports a big club, and supports his local team.” His comments bring up a contrast of placating the hard numbers of financial prudency with the emotional value of a club. How can one find the middle ground between the nostalgia of lower league football and economic viability? Though Wenger has consistently discussed, or warned, about big clubs having an uneven amount of power in the modern game.

“It is inevitable,” said Wenger in 2018 of a European Super League featuring the continent’s wealthiest clubs. “Why? … Because the big clubs will say that if two smaller clubs are playing each other nobody wants to watch it.”

So does Wenger, the romantic, favor a Super League at the expense of the Premier League, or even lower down the levels? Then again, opinions are only dwarfed in the face of the inevitable. The common refrain is how the current pandemic didn’t change the course of history as much as sped its progress. With clubs struggling without supporter attendance, there may be a direct line for major global clubs to close themselves off from their respective footballing pyramids and create a Super League. Debates over out-swinging corners are trivial by comparison.

Even with his executive role, and even at his age, Wenger still hasn’t technically retired from management. There’s always rumors of a move to AC Milan, Bayern Munich, or Real Madrid popping up every now and then, here and gone without any momentum. Considering his comments, we can predict that Wenger will only return to a major club, one that dictates the future of the footballing pyramid as opposed to fighting against the inevitable. But why would Wenger return? His current role is undiluted by supporter criticism or the vulgarity of being judged on binary results. Besides, his job isn’t complete as “there is still a lot of progress to be made in the way we see football.” And though he only left Arsenal in 2018, this feels like a completely different footballing world, even if he played an essential role in shaping it.