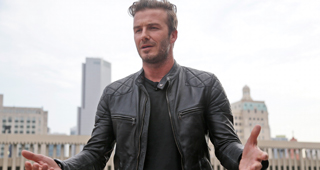 First, it was Edinson Cavani or Luis Suarez. Then, there were links with Luka Modric and Andres Iniesta. Or maybe David Silva after he was finished with his Manchester City season. Neymar also drew headlines, promising David Beckham that he would join his Inter Miami side one day. Beckham most recently brought up the possibility of convincing Cristiano Ronaldo and Lionel Messi to come to MLS. Yet on the eve of his club’s inaugural season, with promises of Miami’s ability to attract superstars, there is no Cavani, no Suarez, no Iniesta or Silva, and certainly no Neymar on the Miami roster.

Instead, a relatively unknown player amongst MLS supporters could actually be the important signing in terms of symbolizing the future of the league. In lieu of big European signings, Miami splashed $12 million on Monterrey midfielder Rodolfo Pizarro. And while Pizarro isn’t even the most famous Mexican player to move to MLS over the offseason (that would be to Chicharito), he is a more important signing. Chicharito - and Silva, Cavani, Suarez, and Iniesta - are aging stars in their 30s. The 26-year-old Pizarro is a Mexican international in his prime. He’s won three Liga MX titles and two Concacaf championships. Mexico manager Tata Martino called him the most important player on the national team.

The signing of such a vital player from Mexico shows the growing stature of MLS within the Concacaf region, while also representing a new phase in the relationship between the two leagues. Liga MX is considered a stronger league tactically, technically, and financially. Yet combined with several other Liga MX stars signing with MLS clubs this offseason, the movement could foreshadow a future with the two leagues working together in a meaningful way. In a way, that relationship has already started: the 2020 MLS All-Star Game will pit the top players from both leagues. But MLS and Liga MX could work together to create an even larger competition.

Miami went once step further in reuniting Pizarro with Diego Alonso, his former manager at Monterrey. The duo won a league and continental trophy together. And if Pizarro was symbolic of the league’s changing standards, then Alonso is a sign of Miami’s ambitions within the Americas. No MLS side has ever won a Concacaf Champions League title. Alonso has won it title twice: in 2017 with Pachuca, he defeated Saprissa, FC Dallas, and Tigres in the knockout stages. In 2019, with Pizarro, he beat Atlanta United, Sporting KC, and Tigres to lift the trophy.

“All MLS teams aspire to win that, and we just signed a guy who has won it twice with two different clubs,” explained Miami sporting director Paul McDonough.

If Nashville were influenced by a Bundesliga pressing style in building their team, Miami looked to Atlanta United’s mold of focusing on developing young South American talent - almost too literally. McDonough, who was hired from Atlanta, immediately started the Atlanta United-ization of Miami. His first signings were a pair of 19-year-old Argentine attackers in Matias Pellegrini and Julian Carranza. The reasoning is tried and true: let the two young midfielders develop, with an eye towards a lucrative European sale.

But is that sort of team-building what we imagined when David Beckham announced his ambitions to put a club in Miami? Not only has the club come under criticism for lacking the big names fitting of the city, there is also an incompleteness to the roster with one unfilled Designated Player position. Inter Miami co-owner Jorge Mas said that the roster spot will eventually be filled by a striker, further adding to the rumors of a Suarez or Cavani signing over the summer. For now, through the expectations of glitz and glamour, there is only what could have been.

Beckham insists that this is all going to plan, adding that he learned from Sir Alex Ferguson to build teams with the right players instead of the biggest names. The roster is filled with MLS veterans in Will Trapp, Juan Aguedelo, Lee Nguyen, and Roman Torres, alongside top draft pick Robbie Robinson. Alonso named veteran keeper Luis Robles as the first captain in club history, telling Robles to hit the gym as the MLS Cup is heavy to lift.

Beckham and Mas are focused on the bigger picture of building a brand that is competitive not only in MLS or the Americas, but the world. Beckham says that he hopes MLS can compete with European leagues within 10 years. Mas has an even more long-term, lucrative vision, predicting that MLS will be “Premier League-ish” in 25 years.

For now, Miami’s presence has already paid dividends, generating an intangible excitement just by having a club in the city. Former Manchester United winger Nani observed that having a derby match between his Orlando City side and Miami was important for adding a passion to the league. Completed roster or not, Inter Miami will happen to the league starting this weekend, and the league will happen to Inter Miami.

“I wish we had a pink one, that’s all I could say,” said Inter Miami defender A.J. DeLaGarza on the club’s white home jerseys that complimented their all-black away kits.

Can a color represent the story of a city’s modernity? And has any city re-invented itself and played a larger role in the American storytelling conscious over this past decade? LeBron James’ move to Miami in 2010 kicked off a three-year run of South Beach-inspired fluorescent sneaker colorways that broke $1000 on the resell market, capped off by the maximalist, pink-drenched dystopia of 2012’s Spring Breakers. The film studio A24 furthered their regional storytelling with a so-called Florida trilogy, with place becoming its own character representing the tension of showy exterior and lingering interior. The ownership group called the team the Miami Vice as a working title, seeking inspiration from Michael Mann’s neon, moody atmosphere from 2006.

Taken with a soccer twist, Inter Miami would balance a bright pink logo with the substance of grinding out three points in a match, whether in MLS or in competitions across the region.

Beckham, perhaps wearily, said that he’s worked on this Miami project through its starts, stops, and dead-ends for seven years. That timeline is a contrast to Nashville SC, who were praised for the unity of their city in quickly putting together an MLS bid. But there are still battles testing the validity of the club even days before its debut. Unsafe levels of arsenic was discovered on the land of their proposed stadium site, which was previously expected to open in 2022. They recently lost the first round of a trademark battle against Inter Milan over the “Inter” description.

But at least there will be an official match, a second chance for MLS in the city after the Fusion folded in 2001. Almost 20 years later, a matured MLS returns to a contemporary Miami, with each side clear in their global aspirations. There is no better symbol for the state of the league than Beckham, branding power, and Liga MX’s influence. The superstars will arrive one day. But in the meantime, Inter Miami have quietly built a foundation tested and honed for success in the Americas.