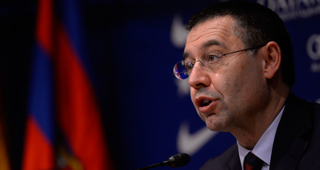 When you’re a multi-billion dollar business, it’s hard to be anything else. Més que un club gets thrown back in Barcelona’s face by people who are interested in misreading the famous credo, which is more about Catalan national identity than purity or transcendence, but it’s true that there’s a certain holier than thou quality about Barca that’s thoroughly unearned considering they’ve accepted many large checks from labor-immiserating shoe companies and murderously parochial Middle Eastern governments, same as a lot of other top-tier clubs.

At the level Barcelona operate on, the game has been corporatized to hell and any virtues beyond those upheld on the pitch went out the window many, many fiscal calendars ago. To quote Uncle Galeano, opining from the late-Clinton world of 1998: “when the sport became an industry, the beauty that blossoms from the joy of play got torn out by its very roots.” He’s talking about the JVC logo on Arsenal’s shirts, pitch-side advertising boards. In the intervening two-plus decades, soccer has been soaked in glycerin and placed beneath museum glass. Parking is 30 bucks and admission is five times as much. You can thank the fine folks at Heineken that it doesn’t cost even more.

Even among the richest and most successful clubs in the world, there’s some pretending that this isn’t the case, that there is in fact still a soul residing within the machine, but these arguments are sort of like when Google runs an ad positing itself as a kind of god-conduit for all the best parts of the human experience. It strains credulity. Nobody really believes that the Glazer family, who run Manchester United, don’t regard the club primarily as a massive money-making concern, and anyway, they couldn’t afford Paul Pogba’s wages if they didn’t. Pogba himself is a miracle, and the United fans’ love for him and their community amongst themselves is simple and good. Manchester United is simply facilitator of those things. They sell fun and excitement at a rather high markup.

The same is true of Barcelona, but they pretend harder than anybody. Some of that is the fact that they are technically a fan-operated institution—though that’s not nearly as democratic as it sounds—and some of it is empty sanctimony. Their figureheads operate as dirty and cynically as anybody else. But there is an institutional yearning, if not to demonstrate any of the high-minded virtues the club vaguely gestures toward, then to at least stand for something. If Barcelona are the Catalan club, the most visible export of a region many people understand to be a nation distinct from the rest of Spain, everyone involved is invested in making the enterprise seem more like art than business. This makes perfect sense. Most Americans would prefer foreigners associate us with Tarantino and Future as opposed to, like, Exxon.

The problem is, Barcelona haven’t played like artists in a while. Tiki-taka wasn’t a sustainable style so much as a brilliant coincidence of intelligence and skill–Pep Guardiola conducting Xavi, Iniesta, and Busquets—but the comedown from that aesthetic peak has left the Nou Camp largely dissatisfied. Tito Villanova was Pep Lite, and then sadly had to step away from the job following a cancer diagnosis. Tata Martino was in way over his head. Luis Enrique was awesome right away, smartly employing a system that delivered the ball swiftly and urgent to a terrifying front line of Messi, Suárez, and Neymar, but that approach had its limitations and Lucho burned out rather quickly.

Ernesto Valverde, brought aboard in spring of 2017, was never going to be a revolutionary figure. He’s tightened up what used to be an elements-ravaged volleyball net of a back line, but nobody would call his Barcelona sides exciting or elegant. It’s difficult to say what they’ve done particularly well, beyond possessing the ball and letting Messi cook, which has resulted in a lot of spectacular goals if not many altogether convincing wins.

Valverde’s Barca have been—pronounce this with a wheezing Catalonian sigh—fine, winning La Liga each of the past two seasons over not-exactly-shimmering Real Madrid and Atleti sides while also choking away huge Champions League leads against Roma and Liverpool. These missteps would be more forgivable if the squad itself weren’t so frequently miserable to watch. Barcelona attract a staggering array of talent, paying the highest salaries in the sport, which seems like entirely too much money when you watch MESSI and GRIEZMANN and DEMBÉLÉ and DE JONG combine to create 90 minutes of sideways-passing puke that barely defeats Leganés.

Valverde’s been on the hot seat since the Liverpool defeat last May, and given that his contract is up in the summer, most La Liga observers figured he would captain one more medium-successful season and then the club would cut him one last paycheck and move on. Things have been trending that way all year, but curiously, after losing to Atlético Madrid in an objectively meaningless Supercopa match this past Thursday, the local press—including Mundo Deportivo, which is all but an official mouthpiece for Barcelona—soured on Valverde and word began to leak out that his job was in immediate danger. The precise reason for this about-face on Ernie is and will likely remain mysterious. Josep Maria Bartomeu and the Barcelona board are a capricious, and, going by recent evidence, not particularly competent bunch. Somebody important watched the team cough up a late lead in a glorified exhibition match, hucked a glass of brandy across their humongous living room in disgust, and decided things needed to change immediately.

So with Valverde finished in the minds of the people who decide such things, Barcelona spent the weekend sounding out potential replacements, which ranged from obvious and sentimental (Xavi) to sensible if unexciting (Ronald Koeman) to sensible until you consider it for even a second (Mauricio Pochettino, who relished torturing Barcelona over his 12 seasons playing for and managing local rival Espanyol). The Barca board did all of this more or less in public—and without actually firing Valverde. The poor guy showed up to training on Monday knowing he was done for, but figured he might as well conduct a tactical briefing and a couple passing drills while his bosses mustered the courage to place a phone call that was several days overdue.

They’ve finally done that, and they’ve identified their new manager too: Quique Setién, who is both an excellent strategist and committed to the Barcelona-approved approach of playing fluid, attractive soccer. He might prove to be a fantastic choice. On paper, at least, he’s a more logical fit for the club than Valverde ever was.

And yet it’s hard to feel positive about a process that’s been so clumsy, cruel, ruthless, and rushed. When you’re a multi-billion dollar business, it’s hard to be anything else, but the folks in charge of Barcelona aren’t even shrewd businessmen so much as vain, fantastically powerful hobbyists who can’t perform the simple task of ushering a high-profile employee out the door with some dignity. Their inability to do this illustrates how little they care about other people—coaches, players, fans, whoever. They belong to a uniquely sociopathic rich guy strain, one concerned only with revenue retrieval, status, and success.

These aren’t the values that any big-time club espouses, because it’s so obviously not what a sporting institution should be about, but action often makes clear what press releases and sloganeering attempt to obfuscate. It’s impossible for Barcelona to become anything grander than a winning team, because it’s incompatible with what they are, the obscene sums of money they rake in and the class of people it attracts. If they’re going to be extraordinary, it has to be on the pitch and in the stands, because the boardroom will always be populated by some foul mix of sharks and buffoons, weighing the club down, killing the vibe, reminding everyone that sport at its core is an art, but a heavily commodified one, played at FC Barcelona and all over Europe, for much more than pleasure.