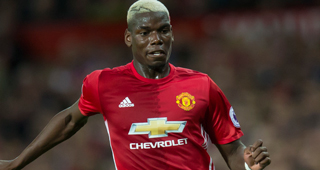 Paul Pogba is a star; there’s no arguing about that. It’s difficult to describe but easy to sense his magnetism. It’s the nonchalance with which he deadens the ball, his ability to throw his hips left and start running right, the curling passes he can play off every part of his foot. He’s pleasurable to watch even when he’s not playing very well. In the way clothes simply look better on certain people, Pogba is in his element on a soccer pitch.

This has been to his detriment over the years because he is not, as you might suspect if you watched his highlights, the best player in the world. He might not be particularly close to that title. Might because it’s hard to tell, with Pogba, how much credit to assign him for his successes and how much to blame him for his failures. He returned to Manchester United in 2016, after a couple promising and a couple more genuinely world-class seasons at Juventus, and he was to be the centerpiece of what we now realize is a post-Alex Ferguson United who are constantly trying to pull it together and rediscover a greatness that only recedes further into the past. The club had recently hired José Mourinho and signed Eric Bailly, Zlatan Ibrahimović, and Henrikh Mkhitaryan. After a pair of perfectly cromulent and dismal-to-watch seasons under Louis Van Gaal, United were going to step back into the European elite. Pogba would take them there.

Three-and-a-half seasons later, that still hasn’t happened, and for seemingly three-and-a-half seasons minus a day or two, Pogba has been on his way out of the club. He and Mourinho never got along—Mou held him to an extremely high standard in the press, a tactic that backfired—and his teammates at United have let him down for the most part, exciting young talents like Marcus Rashford and Jesse Lingard proving to be nice players rather than awesome ones, and veteran signings like Alexis Sanchez and Nemanja Matic arriving and almost immediately losing their legs. In the middle of all this, Pogba has been restless. It’s hard to separate the rumors based in fact from the nonsense, but he’s definitely thought about leaving on a regular basis—for Real Madrid, or in a return to Juventus. United paid $116 million for him, and have reasonably demanded transfer fees nobody has yet been willing to pay. So Pogba has stayed, not entirely unhappily, but with an uneasiness you can sense, especially when United are in the midst of a poor run of form.

He’s hardly played this season, most recently due to an ankle injury that won’t quite heal. This has been good business for the English tabloids, who all assert that he is trying to force a move away by pretending to be more hurt than he is, but as ever with Paul Pogba, it’s not clear what’s going on. United have said they won’t sell him this winter. The popular consensus—though far from total—is that he’ll exit in the summer. Pogba’s agent, Mino Raiola, recently said that United are a mess internally and don’t offer Pogba the support he needs to excel. Raiola might be the most cynical man in the world, but he’s also correct in this case. United haven’t done right by Pogba. He has suffered because they haven’t had any idea how to build around his talents.

But to be fair to United, those talents are mercurial. Pogba is certainly the team’s best player, but from match to match—even moment to moment—he is not their most consistent one. Take United’s season opener against Chelsea, a 4-0 win that turned out to be a harbinger of absolutely nothing. Pogba was—well, here is the thing: kind of terrible, but also terrifically impactful. For much of the match, he attempted to control the midfield unsuccessfully, taking too many touches and misplaying relatively simple passes in his own half. (It’s not atypical for Pogba to make the easy stuff look hard, and vice versa.) And then in the second half, he created two goals by himself, one on a long ball over the top that landed directly on the toe of a sprinting Marcus Rashford and the other on a 50-yard run that started from the right back spot and ended with him sliding a pass into the path of Daniel James from the edge of the penalty area. It was an immensely Pogba™ performance, both unpretty and beautiful.

Which is why even those of us who have watched him for a half-decade or more still don’t know what to make of him. He’s probably not in the very top tier of midfielders in the world, but he could be, perhaps, with better teammates. He can’t be relied upon to do everything. He’s more of an “8” than a “6” and he’s usually had to do more defensive work with United than he would in an ideal setup. He usually looks fantastic for France, but national teams are strange ecosystems. You end up hedging a lot with Paul Pogba; there’s a lot of on the other hand-ing involved. This is remarkable because he’s not young anymore. He’s 26 years old and should be in his prime. Yet what he is, at present, and what he still could be, in the future, remains hazy. Maybe he needs to move to Madrid or Turin, not only for himself, but so we can finally figure out what he is. Until then, or until United sorts itself out—they’re eighth in the table; don’t count on it—we’ll continue wondering. As an individual, he certainly has everything he needs to be great. It’s the application we might end up waiting on forever.