Marco Rose Develops His Own Style Of Emotional Football In Bundesliga 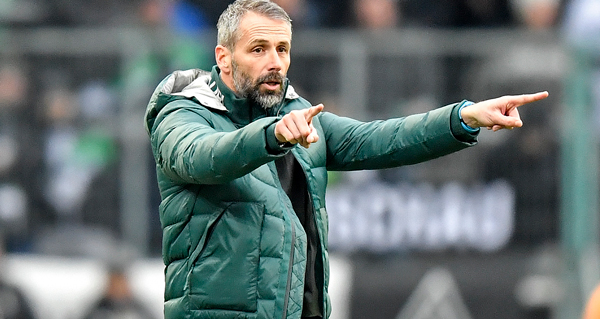 Borussia Monchengladbach manager Marco Rose remained casual in admitting it was “cool” to be top of the Bundesliga table after beating Bayern Munich last weekend. Marcus Thuram, son of former French World Cup winner Lilian Thuram, got a slight touch on the ball inside Bayern’s box in stoppage time of a 1-1 match, just ahead of a reckless, panicking Javi Martinez to win a penalty. Remy Bensebaini snuck his left footed penalty just under Manuel Neuer to claim the 3 points. And though Bayern had the better chances before Gladbach’s equalizing goal, Martinez and Joshua Kimmich’s dejected expression following the penalty giveaway acknowledged their own side’s shortcomings. And with the win, Rose’s upstarts remained top of the Bundesliga table, appropriately leading RB Leipzig by one point.

“He reminds me of Zinedine Zidane,” said Rolland Courbis, Bensebaini’s manager at Montpellier back in 2012. Though Bensebaini is no attacking midfielder. The Algerian is relied upon to consistently create chances from left back, a role we’ve grown used to from the most modern sides in the game. That it was a 21-year-old Thuram and the 24-year-old Bensebaini, both signed from France last summer for under $20 million combined, taking down the German champions was equally symbolic. The Moneyball move came directly from the top, with Rose cutting his teeth at Red Bull Salzburg for the last two seasons, winning two Austrian league championships and making one appearance in the semifinals of the Europa League. His side never lost a home game during his time in Austria.

Rose demonstrates the byproduct of brand association, having been apart of two most the most distinct entities in modern European soccer. He played under Jurgen Klopp at Mainz for 6 seasons in the early 2000s before gaining management experience under the Red Bull soccer empire. We can imagine how his team plays based on that resume alone: something fast, direct, with a focus on pressing and transitions. Gladbach sporting director Max Eberl admitted that he wasn’t looking for a new manager last summer, but couldn’t pass up the chance to hire the 43-year-old German. Rose is a true gegenpressing disciple, saying that his basic philosophy revolves around “emotionality, hunger, and being active.”

“Maybe there are a few parallels with Jurgen, but I’ve also found my own style,” he adds, in separating his own ability.

There are slight differences in shape between Rose and the current Liverpool manager, with Rose preferring a narrow 4-1-3-2 diamond midfield formation. The narrative links, especially those of high-pressing in the Bundesliga, always return to Klopp. Former Mainz manager Sandro Schwarz also played with Rose, thus creating the start of the Klopp coaching tree. Perhaps Klopp’s joyous, energetic disposition hides the depth of his foundational, replicable philosophy of play. The vastness of his influence on the Bundesliga continues to unfold through the success of former pupils like Rose.

“He shaped all of us. We picked up a few things in terms of football, but above all it was the way he was with people,” said Rose of Klopp’s impact.

While Salzburg is part of the controversial, disruptive Red Bull footballing empire, there is seemingly no residual backlash surrounding Rose. Audiences have made a mental distinction between the energy drink’s brand and the players and managers developed within the system. After all, the Red Bull soccer philosophy stands for the type of youth-oriented, fast-paced, exciting style that supporters demand of their own teams. Their scouting network is cutting edge for both players and managers - and other footballing minds.

There is an added x-factor of internet intrigue in seeing Rose’s growth from his time at Salzburg to today through his assistant Rene Maric, one of the founding writers of the Spielverlagerung soccer tactics site. Having grown up in what he describes as a 1000 person village in Germany, he observes that on the internet you “can have 5,000 readers and 200 comments” on in-depth tactical pieces not aimed as the casual supporter. The now 27-year-old Maric first found a captive audience with Thomas Tuchel before officially working as Rose’s assistant with the Salzburg youth team.

It is fitting that Rose and the Red Bull network would employ an assistant manager who found an audience through 3,000-word essays on building a game model. Maric hopped on Twitter last February to remind his over 28,000 followers that while Rose’s Salzburg didn’t start off in a 4-2-3-1 formation during a recent match as articles suggested, they did find themselves in that shape due to circumstance. For measure, he added that the team’s 4-1-3-2 diamond formation has 11 different variations without the ball “just in terms of base staggering.”

Thus, there is an aspirational element to Gladbach this season, in how they’ve translated written theory into play. Their on-field success resonates in the digital world, that there are real world test cases. Rose hasn’t necessarily reached viral success considering his side’s achievements this season, perhaps due to the efficient nature of his goals as opposed to longer passing sequences that attract retweets and eyeballs. But we were along for the journey on social media, from the first articles on the site, to the Salzburg appointment, to their current status as German league leaders, nonetheless.

At the beginning of this Bundesliga season, eight out of the 18 managers had no previous experience coaching in the league. Six of those eight managers were in their 40s, with Rose the youngest.

The managerial youth is fitting. The Bundesliga already has the reputation for developing young players, but there must also be managers on the other end whose styles are unlocked by a specific directness and fearlessness that youth can provide. Perhaps the relatively inexperienced managers are also in a place within their careers where they can eschew pragmatism for philosophy. The league currently feels like a footballing experiment, something close to a techno-footballing utopia defined by continual innovation and progression.

But this current Gladbach moment almost never happened. In the 28th minute of the match against Bayern, Kimmich hit a shot that swerved under Yann Sommer’s collapsing left leg. The ball spun towards Monchengladbach’s net. Sommer stopped the ball before it crossed the line. The team’s Twitter account labeled it as the “Finger of God.” There’s a sliding doors world where Bayern, enabled by the early goal, exert their dominance and take the full 3 points, leading to stories of their resurgence instead of Gladbach’s surprise. Genius is a matter of luck, and sometimes, a matter of centimeters.