Granit Xhaka, The Myth Of Captaincy And Signaling A Team's Aspirations 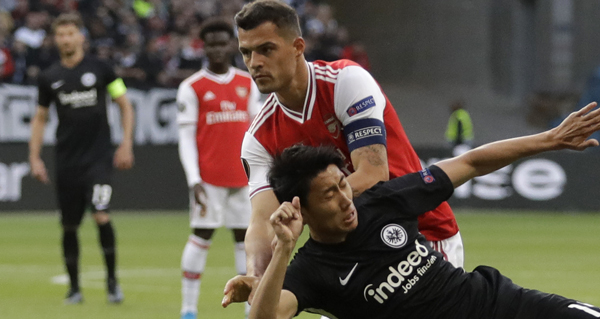 “My first idea is to have five captains,” Unai Emery said upon taking over Arsenal last season, signaling out Granit Xhaka, Aaron Ramsey, Petr Cech, and Mesut Ozil to assist the side’s official captain Laurent Koscielny. Thus, Xhaka official introduction as team captain this season was a process of elimination. Rasmey, Cech, and Koscielny are no longer with the team, and Ozil has appeared in just one match after a summer of transfer speculation. But Emery remained steadfast in selecting another leadership group of four players to help augment Xhaka’s role and keep tabs on the dressing room. And while spreading leadership responsibilities amongst respected leaders in the locker room appears as a signal to empower the team, that impulse could also signal a lack of strength and direction from both team and manager in a different circumstance.

“Sometimes he has made mistakes,” admitted Emery in introducing Xhaka as his captain for the season. The characterization is an understatement for a player known as much by his tactical indiscipline and reckless tackling (he was described as a “walking yellow card”) as for his long-range passing ability. A Sky Sports analyst observed that Xhaka was a “divisive character” amongst supporters, recalling an occasion when the midfielder was booed off the field. Ian Wright dug deeper in saying that picking Xhaka over Matteo Guendouzi was not only crazy, but showed that Emery wasn’t strong enough to make a bold decision. Another analyst said that relying on a player vote was pathetic, exclaiming that Emery should “make a decision!”

But it would be unfair to blame Emery entirely, especially if his actions were a symptom and not the underlying cause. After all, his predecessor, Arsene Wenger, either no longer believed in the idea of a captain or was completely befuddled by the changing era of player personalities. In discussing Neymar’s captaincy with Brazil during the 2018 World Cup, Wenger said that this current generation no longer produced “natural captains,” adding that no captain could control Neymar due to superstar status with “170 million followers.” Though surely a locker room can differentiate between social media attention and the respect one gets from teammates, opponents during matches.

One could see how Wenger’s measured approach would clash with the idea of a folkloric captain who drives a team forward by sheer will and personality. His handpicked captain Koscielny went off injured in the first half of one of his last matches in charge of Arsenal in 2017, a game against Manchester City that would finish in a 2-2 draw. When asked who took over the captain responsibility from Koscienly, Wenger responded “Err, I don’t remember.”

Timing and context are essential. In inheriting that listlessness, Emery’s goodwill approach of giving responsibility to his players is, in hindsight, a continuation of Wenger’s later years of a side lacking a focal point. Emery could have been right in his progressive approach to empowering a squad in 2019, but perhaps a dictatorial approach would have been more appropriate to make a clear, symbolic break from the past. Academy director Per Mertesacker recently presented technical director Edu with a document outlying a blueprint for the ideal Arsenal player. Will it return Arsenal to prior Premier League glory? At least it’s a singular plan.

Then again, Manchester City settled on the same approach as Arsenal with players voting for a new team captain following the departure of Vincent Kompany. Pep Guardiola’s side voted in  David Silva, the longest standing player in the team. The 33-year-old Silva doesn’t necessarily fit into the on-field vocal presence we traditionally associate with the role. But when asked what makes a good captain, Guardiola responded that a good captain simply “has to be himself.” Of course, winning four league titles, once in record breaking fashion, alleviates some pressure while helping with perception.

“To be strong and to be in front of the team,” said Xhaka, when describing how he sees his role as captain. He has his teammates’ backing in spite of public perception. Hector Bellerin said that the midfielder knows what it means to play for the club, with Kieran Tierney adding that Xhaka embodies everything that a captain is. Rob Holding said that Xhaka demands accountability in the locker room. It is a clear example of the divide between what supporters see on the field against the day-to-day, behind the scenes chemistry.

We know that a side’s best player shouldn’t necessarily be their captain. A captain must be steady, vocal, and level-headed. In fact, we draw a clear line between a player’s leadership qualities and their match-winning ability. Yet at the expense of overanalysis, could picking the wrong captain, even if they are just one player amongst 11, symbolically sink an entire season?

In a moving scene that went viral following last season’s Champions League Final, Liverpool captain Jordan Henderson hugged his cancer-stricken father. Henderson is not Liverpool’s best player, or even their most important midfielder. But he’s an essential figure amongst supporters, analysts, his teammates, and Jurgen Klopp despite any match-changing ability. Steven Gerrard is the club legend, but Henderson is the leader.

“People think you wear the armband to look good in and shout a lot and that’s the job done,” added Virgl van Dijk in everything that Henderson does for the side that either gets overlooked or is impossible to quantify.

Analytics could further change the perception of a captain’s importance. Xhaka was bought by Arsenal partly due to his underlying statistics, especially with a high “packing” metric that measures how many defenders a player takes out of play with their passing. Xhaka’s analytics should have confirmed his quality amongst supporters, but it seems like it did the opposite in only causing further division amongst supporters debating his actual quality, which then opens up the debate of the usefulness of metrics themselves.

Arsenal’s recent 1-1 draw against Manchester United was described as perhaps the poorest in over a decade between the two sides. The captains - Xhaka and Ashley Young - were seen as symbols of the fading quality of both clubs, a far fall from the glory days of Roy Keane and Patrick Vieira. As usual, Xhaka was in the middle of controversy. He fouled Jesse Lingaard on the counter attack leading to United’s opening goal, and seemingly ducked Scott McTominay’s shot. The captain was heavily criticized on social media following the match. Perhaps the response is due to how Xhaka’s role cuts down the dream of a season, only revealing its underlying realities and limitations.