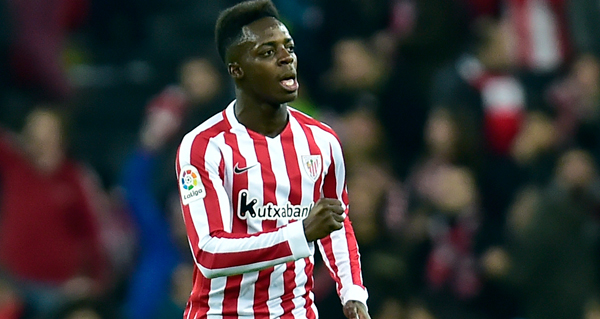 “It’s difficult to imagine a more important signing,” said Athletic Bilbao president Aitor Elizegi in reference to Inaki Williams’ nine-year contract extension signed this past August. And while Elizegi was discussing the signing in reference to his own side, when taking into context Athletic’s Basque-only transfer policy and that the 25-year-old forward had been linked to other clubs, one could argue that Williams was the most important signing across world football in last summer’s transfer window. He admitted that he had contact with Manchester United before signing the extension that presumably keeps him at the club he joined when he was 18 years old for the rest of his career. And he may play in every one of these matches at this rate, as he has appeared in 125 consecutive matches in La Liga dating back to 2016.

Williams immediately paid back the team by scoring the opening goal against Real Sociedad in an early-season Basque derby match. Williams’ raw scoring numbers don’t necessarily jump out, with career-high of 15 goals in 41 matches last season. Yet we must grade the Athletic squad on their own value scale. Their club philosophy states that they will only sign players who were born in the Basque Country. A study ranked the 2019 side as the most cohesive in Europe, with just 1.3% of minutes going to new players. There is an eerie symmetry when examining their summer transfer list, with all 10 arrivals either from their B team or returnees on loan, along with 10 departures. The club spent $0 in the transfer market, while also making no revenue from selling. Even with the limitations, Athletic have never been relegated from La Liga in their 121 year history. The only two other clubs with that distinction? Real Madrid and Barcelona.

Hence the importance of keeping Williams, or rather, avoiding the impossible challenge of replacing a player of his quality. He is a player of unorthodox streaks. In addition to never missing matches, he also failed to score in 41 straight home matches, with a run of 15 consecutive goals all away from home. The un-nuanced take would be that he is a counter attacking player who thrives in the space of away matches. He broke the dubious home record in style with a two-goal performance against Sevilla last January. The opening was a blasted effort that would have made goal of the weekend lists on its own. But it was his second goal that showcased his game changing quality. He received the ball on a turn inside his own half, flicked it past an onrushing defender, then beat another defender for a goal. The moment won him the La Liga player of the month. And even as he hit over 21 MPH during that sequence, one hesitates in describing Williams’ game in a stereotypical fashion of power and pace.

“It gives me an immense pride to say that I am one of the first blacks to be part of Athletic, score goals for the club, and leave a legacy,” said Williams shortly after signing his new extension. Williams is the second black player ever to represent the team, with Jonas Ramalho, born of Angolan and Basque parents, making his debut in 2011. Ramalho described the moment as “a bit of a bomb going off that a player with black roots was on the first team,” but emphasized the supportive environment, as if the Basque community wanted him to make it. As one supporter see it, “if they are formed here...it’s within our philosophy,” regardless of both players’ African heritage. Though many already see Ramalho and Williams as a reflection of the increasingly multicultural city.

A Basque news reporter described Athletic’s existence in terms of a societal function, with the club bringing “together a society that is traditionally very fragmented” from the Spanish Civil War. The sentiment recalls Samuel Eto’o’s observation that the sport reflects the bigger questions of the world. And it is interesting to compare the journeys of Eto’o and Williams as each have similar understandings that they exist within the larger context. Eto’o was a nomad, playing for 13 teams across six different countries. Williams’ Athletic career is insular by definition. Eto’o focused on ability, saying that a player’s quality could transcend the racism that an African player may face in Europe. Williams simply says that he was born in Bilbao and that he is Basque, thus implying it is up to society to change their perspective.

This would only be the beginning if Williams gets his way. He said that he wants to “open doors for people when others say: ‘a black player cannot play for Athletic’ or ‘that black player is not Basque.’” He goes beyond binaries, saying that he feels Basque while understanding his African roots. Williams’ background, with his parents fleeing to Ghana during a civil war in Liberia and eventually settling in the Basque region, showcases Eto’o’s idea of the openness of the sport.

That movement and development of the region also gives Athletic another avenue to increase its talent pool in a football world that is increasingly global. Besides, how can a club focused on locality compete in an era where clubs battle for international attention? And what does it mean for a person to be of something? And does discussing Williams’ career purely on a playing level, without mentioning his roots, signify an advancement or an erasure?

“I think it opens a lot of minds,” added Williams, who has represented both the Spanish and Basque national team.

The discussion, perhaps always asked by outside observers, was in the air last season as the club won just one of their opening 13 matches and were firmly in the relegation zone before sacking Eduardo Berizzo. It is the easy and obvious reason to blame any time Athletic struggles. When the Spanish league began, players from the Basque region made up almost half of the league. The region today makes up 4.9% of the population in Spain. Real Sociedad’s top playmaker this season is a Norwegian midfielder on loan from Real Madrid, a pipeline that would be off limits to the team. And yet, as former Athletic president Jose Julian Lertxundi said, “you don’t touch the philosophy: there are sweeter ways of comitting suicide.”

A potential change would represent modernity finally winning out. Or maybe, it would be that a Basque-only philosophy was held up by winning, and that once the losses mounted, they would behave like any other side. For now at least, relegation - and existential crisis - averted. And from that perspective, embracing the club’s restrictions and challenges is its own personality type. Elizegi added that Williams could have played for any other club in the world, but he chose Athletic. And for Athletic, Williams represents both a celebration of its past, but also a portal into how the club may survive and thrive in the future, philosophy in tact.