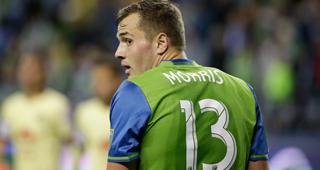 One of the most followed MLS stories in recent memory came to a conclusion last January when the Seattle Sounders signed homegrown player Jordan Morris. It ended a saga that had began nine months earlier, when Morris, still a student at Stanford University, made his national team debut and scored in a friendly against Mexico. The goal began a seemingly out of nowhere meteoric rise for the college sophomore, and displayed the pace and directness that put European clubs on alert.

In signing with the Sounders, Morris spurned an offer from Werder Bremen, thereby raising a larger debate of where he was best suited to develop his skills. In the past, he may have signed with the Bundesliga club - but a combination of factors, including the lack of development from other high profile American strikers in Europe (most notably Jozy Altidore), gave pause to this default line of thinking.

I exchanged a series of emails with Connor Huchton of The Classical and The Stanford Daily about witnessing the development and rise of Morris and the ever expanding pool of MLS talent. From his one year in the Sounders’ youth academy to his three seasons at Stanford, Morris developed in the American soccer system. Of course, many players have followed this path, but none as loudly. His game, built on power and speed, is perfect for the transition oriented approach of Europe.

Morris ultimately chose Seattle because he was a hometown kid. He spoke of attending Sounders’ USL matches as a kid. Owner Adrian Hanauer emphasized the personal and family importance of the signing. A 21-year-old phenom signing for the team he supported as a team? Perhaps this is a sign of soccer’s growth in America, after all.

Yu Miyagawa: My initial reaction of Jordan Morris’ signing with the Sounders was "that was obvious". He was a Sounder in soccer identity when considering his past of attending USL matches and family connections with the club. He's certainly the highest profile homegrown MLS player ever, but these signings happen all the time around the world with players who have been with a club since elementary school transitioning into the senior side. And obviously, this is great news for the MLS and his play over the next two years will be analyzed as much as any player in the league.

With that said, you have to admit there was some disappointment in him not playing against Bayern Munich or Borussia Dortmund, no?

Connor Huchton: I don't feel any disappointment, though I would've three years ago. These days I'm skeptical about the value of nascent American strikers joining possible relegation sides. Werder Bremen isn't Sunderland, and Jordan Morris isn't Jozy Altidore, but that kind of leap in competition - from Santa Clara to Allianz Arena - doesn't always help the player as much as it ignites collective imagination.

It's fun to believe the rising stars of American soccer can and should explore larger worlds, but here's the best part - Seattle is a much larger world. I've been there - they have an entertainment museum, at least three donut shops, an underground tour, public transportation, an ocean  - and so much more for Jordan Morris to discover. He'll have the time of his life when he sees that Space Needle and starts in a 4-3-3 and watches Dempsey tilt over as a defender brushes barely against his back.

That clever tilt, the history of the gum wall, how to hone those beautiful, far-way horizontal runs Morris makes across the field - all of this will be learned as part one of the biggest clubs in North America, even if a few exciting Americans Abroad updates are lost. A starting spot, a roaring crowd, and decent competition make for fine professional transitional cornerstones (probably - I've never been a professional soccer player).

Over the last couple weeks Morris made his first two starts for the Sounders in the CONCACAF Champions League against Club America, and it seemed like an apt level for his current game. He wasn't out of place, and added some nice runs and tidy field-stretching touches along the way, but he also needed to adapt in a way the college game never required. He became an ancillary piece, drifted in and out of the game, but still maintained some quality when set against everyone else on the field (that incredible speed and knack for dribbling doesn't depart). These mixed results - between being and trying - are perfect for Jordan Morris. Maybe Werder Bremen would have been, too, but I'm happy to watch him here.

Miyagawa: From Santa Clara to Allianz Arena sounds like the final installment of the Goal! trilogy. Regardless, you're right in terms of players developing anywhere, as Jamie Vardy has proven this season. There is something to be said about certain players, positions, or playing styles that are better off marinating with playing time in a nurturing setting.

I don't know if the Bundesliga would have been too far of a stretch for Morris. His style fits an European template for a front three attacker, and at the very least, his pace can have an effect offensively and from a pressing standpoint. He didn't look out of his depth in his international appearances either.

This also brings up how soccer talent is mined here in the states. I point to Jorge Villafana or Ramiro Funes Mori breaking out on reality TV competitions and playing in Mexico and England respectively - why couldn't this have been Morris in terms of making a leap to Europe? We don't know exactly how good Morris is at this point.

The college soccer equation is especially interesting since there seems to be an age gap in between teenage prodigies and older vets in the MLS. But developing this age group of players also speaks to the development and growth of MLS managers. In terms of the ever-growing talent pool, you can throw college soccer “late bloomers” into the equation with youth prodigies and European/MLS vets that comprise the MLS.

So I'll leave you with this question: is Jordan Morris' development indicative of a larger movement in college soccer, or is he a one-off special talent?

Huchton: We don't know exactly how good Jordan Morris is - he hasn't scored in first four competitive games for Seattle, so I'm sure people have already concluded with the sure answer that he isn't good at all - and you're right that his style probably fit the Bundesliga well enough.

But here's what we do know - and please imagine me rolling up my cufflinks and projecting my best commentator voice - Seattle is huge! He's starting every week, and he's expected to score and play well as part of a massively popular, cup-contending club.

If he were in distant Europe, we'd be fine reading lukewarm tweets about substitute appearances for the next half year or so. The standards would be lower, remote, and abstract. Here, they're real, loud and full of too much expectation, which is often doled out in unfair, harmful measure for neophyte strikers like Morris. For me, that's the negative of Morris and Seattle - the de-contextualized expectation which will only grow, especially if he fails early in the season.

I think he's a once-in-a-few years talent. But maybe not - Cyle Larin was 2015's #1 SuperDraft pick, and he's nearly an equal to Morris in potential. He's been incredibly productive and thrilling to watch since leaving UConn, and improves with every step of hold-up play. He has a powerful quick shot release that inverts and blasts with instant reckoning, and that particular talent is probably just as unique as Morris's speed and dribbling.

Programs like UCLA and Akron and Stanford (in addition to Morris, the Fire's newly drafted left back, Brandon Vincent, was a day-one starter) play unique, personnel-based styles and produce yearly prospects, but until that half-season becomes a full season and the development track starts making sense, the NCAA path is bound to create mixed results. Despite that necessary skepticism, it's worth noting - as Matthew Doyle has - how well college players are performing early in the first weeks of this year's (genuinely exciting) MLS season.

Miyagawa: Speaking of the Larin vs. Morris debate, I remember reading a tweet that was along the lines of if Klinsmann had never selected Morris for the match against Mexico, Morris would have been "just" a top college player as opposed to a player we see as the future of the national team attack.

You went to Stanford so you had a different viewpoint of his play and hype - suppose that call up never happened, where is Morris now? Of course, he could still be in Seattle in the same position with the same expectations, but I'm also wondering if flying under the radar without those expectations would have changed his development in the next couple years. So instead of us having this discussion of whether he should be in the Bundesliga, he would have been just another rookie of the year candidate.

In regards to college soccer, I think there is something to a player maturing both physically and mentally in those four years, especially in terms of the taking on a professional mindset that will benefit them in the long term. But again, I'm optimistic about college soccer being another viable place for players to development in addition to MLS academies, PDL, and USL sides - each at their own pace, right?

Huchton: Very true - if Klinsmann doesn't select Morris, the hype might be limited to Sounders fans, though that would still be palpable given how desperate Seattle is for a young star.

I've watched Morris play live quite a bit over the last two years, and he was often exceptional at the college level - almost no one on UCLA or San Francisco or whichever college squad could match his combination of strength, speed, and ball retention on the run. Whether that remains true in MLS is dependent on his chemistry with Dempsey and the stretching of stamina that made him so dangerous late in games for Stanford. He's looked exhausted around minute 65 or 70 so far - elongating that about ten minutes could make a big difference in his extending his game, because the rest of Seattle's front line inevitably tires in their old age (of course, Valdez often does his best to defy this through a series of impossible heading leaps and bounds).

I'm also skeptical that Morris will reach his full potential until Seattle brings in a DP playmaker - right now, Ozzie Alonso is asked to do more than humanly possible, and while he sometimes succeeds, the lack of a definitive #8 or #10 leaves a lot of Morris runs horizontally stranded.

It's like the college game. Balancing a midfield is like balancing training and scheduling - you have to do it for the sake of your own lukewarm metaphor's survival.

Miyagawa: That’s a good place to leave the discussion, cutting it right down the middle. Here’s to the next lukewarm metaphors, and more Jordan Morris’ down the line. I’ll email you a year from now about Christian Pulisic incredible 20 goal season at Dortmund.