The Soulless & Conservative Second Half Of Arsene Wenger's Arsenal 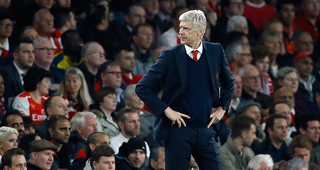 If you’re retirement age and need a financial planner to manage your money safely, wisely and sensibly, Wenger is probably who you hire as those are some steady and reliable returns. Maybe this is how Wenger is a voyeur?

We’re now two months away from another third or fourth place finish if Arsenal can stave off West Ham.

Arsenal was given a 65 percent chance of winning the EPL in late December after beating Manchester City 2-1. Their lone January transfer, after no outfield players were signed in the summer, was to sign Mohamed Elneny from Basel for £7 million. Wenger studiously approaches the transfer market unsentimentally without the urgency that he’s running out of chances to win a major trophy again. Wenger operates under an elaborate multi-year plan he won’t compromise.

The top of the Premier League table was as wide open as it could ever be for Arsenal with their expected rivals almost completely filtered out. Jose Mourinho had been fired after Chelsea cratered to start the season, Louis van Gaal was on the cusp of being fired with Manchester United underperforming badly, Brendan Rodgers was long fired by Liverpool, and Manchester City was in an injury-ridden transition year waiting for Pep Guardiola.

Losing two Premier League matches in a row after miraculously beating Leicester City with the Danny Welbeck winner, and with their title chances in the balance, Wenger started Elneny alongside Francis Coquelin against Tottenham in what was a huge departure tactically and a newfound pragmatism. The tie was a grind after Coquelin was sent off and the result really only benefitted Leicester.

Wenger revolutionized the Premier League just as it was exploding in its initial television age and became the primary counterforce against a Manchester United hegemony during the Alex Ferguson era before the arrivals of Roman Abramovich and Sheikh Mansour. Wenger’s results and aesthetics were indisputable.

Wenger’s risk averse approach to assembling a team ever since has effectively shielded Arsenal from the types of wild swings that Liverpool, Chelsea and even Manchester United have endured over the past decade, but it also has kept them from ever truly contending for anything beyond the FA Cup. Arsenal is perpetually unformed, whether it is a defensive midfielder who is also capable of distributing the ball, or a clinical finisher in the box worthy of playing for the seventh richest club in the world. Those finishing pieces that make good teams great and only come fortuitously if they don’t come expensively just never do arrive for Arsenal.

The conservativeness of Wenger’s portfolio management did allow Arsenal to purchase Mesut Ozil and Alexis Sanchez on below market transfer fees but sometimes you need to spend extravagantly and dangerously on an Anthony Martial.

Ozil and Sanchez were added to a rather mediocre side of Aaron Ramseys and Jack Wilsheres rather than adding Thierry Henry, Freddie Ljungberg and Robert Pires to a core of Patrick Vieira and Dennis Bergkamp, who both predated Wenger with Arsenal for that matter.

Wenger last won the Premier League in the first season after Abramovich bought Chelsea, last came in second in Jose Mourinho’s first season and haven’t finished anywhere but third or fourth ever since. Incapable of constructing a title-worthy roster in an EPL in which Chelsea and City are spending as they do while Liverpool and Tottenham are down, Wenger’s backdoor slides into Champions League safety that have become his signature are entirely unsustainable with where the EPL is going now. Arsenal can no longer coast into safety by beating up on clubs in the bottom half of the table with their clear talent gap.

The parity up and down the table with the new TV money means no club is ever safe in any match or in any season for that matter. Mourinho even had to answer relegation questions with how horrifically they started the season and they weren’t even media sensationalized hyperbole. If the establishment clubs weren’t so concerned about how difficult top-4 finishes have become, will further become and what those implications are financially and in terms of on the pitch prestige, they wouldn’t be threatening UEFA with an absurd European Super League. Spurs already are comfortable playing European matches on Thursday and now we’re seeing United/Liverpool Europa League ties.

Liverpool’s improbable second place run in 13-14 in which they really should have won the title with the extraordinary seasons posted by Luis Suarez, Daniel Sturridge, Raheem Sterling and even a final productive one from Steven Gerrard came after finishing 7th, 6th, 8th and 7th, and then before dropping to 6th.

Leicester City doesn’t have the hefty Liverpool pedigree but they’re having a similar season coming from seemingly nowhere. They came from 14th last season in the relegation zone at one point to become worthy title winners if they do finish it off. Leicester City will play in the Champions League next season and likely finish outside of the top-4 as their financial limitations will make it impossible to create a sustainable competitor but there will be more insurgents behind them from more likely sources such as Southampton, West Ham and Everton.

The EPL has become a land of wolves and Wenger is not a wolf, certainly not at this point in his life and career.

Mourinho comes back to Chelsea, wins the league, ceaselessly mocks Wenger and leaves again in his usual nihilistic inferno of betrayal, paranoia and brimstone. Deciding which manager had the better run underscores your priorities. The Mourinho vs. Wenger rivalry was a one-sided and often sick and weird affair, but it was also a microcosm of his impotence.

Whenever Wenger does leave Arsenal, the club will be in a substantially better position than when he arrived and that deserves commendation, but the wasted years of a safe and soulless status quo are gone forever and his caretaker blueprint has finally become an impossibility.