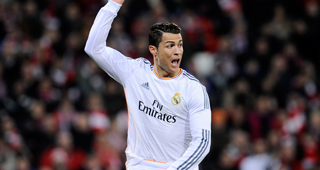 Cristiano Ronaldo wore a brace on his left knee during Portugal's training session on Friday.

Ronaldo had been doubtful to face Germany in their opening Group G game but declared himself fit to play and was largely ineffective.

Earlier in the week, goalkeeper Beto said he believed Ronaldo would be "100 percent fit" to face the U.S.

Ronaldo's status for the remainder of the World Cup has been the subject of many rumors.