Roberto De Zerbi And The Burden Of Possession-Based Branding 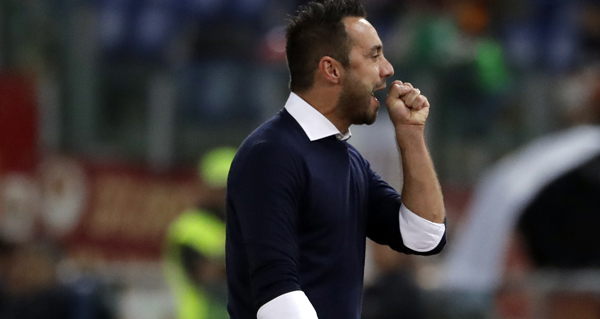 Sassuolo left-center back Gian Marco Ferrari not only ignored his 2-on-1 advantage on the wing when he played a ball into center midfielder Francesco Magnanelli in a March league match against Napoli, he seemingly played straight into Carlo Ancelotti’s side. The ball invited a pressing sequence from Allan and Napoli, to which they had numbers in their favor with three forwards man-marking Sassuolo’s three center backs and two midfielders pressing Sassuolo’s two deep-lying midfielders. Back turned to goal, Magnanelli played a side pass to his midfield partner Duncan, who immediately turned the ball up the field with one-touch, setting winger Jeremie Boga into space. In a matter of seconds, that 5-on-5 pressing sequence turned into a 5-on-5 counter attack for Napoli with Allan now chase, resulting in a Domenico Berardi poached goal. It was all started by that initial ball baiting Napoli’s midfield to press, thereby creating space.

Yet it’s not only within structured goal kicks that Roberto De Zerbi’s side calmy bait their opposition. Up 1-0 and defending deep in the 26th minute during a Coppa Italia match against Catania, Sassuolo defenders were under pressure in their box after recovering the second ball off a headed clearance. Instead of easily clearing the ball, they progressed play straight up the middle through a series of one-touch passes, eventually resulting in a clear opportunity in the other end. The sequence took place in eight passes under 20 seconds. Again, their seemingly risky maneuver only served to induce their opponents to momentarily lose their positional discipline.

“I like how Sassuolo play,” said Pep Guardiola at a sports conference in Italy as he, Carlo Ancelotti, and Arrigo Sacchi discussed how smaller sides are no longer just focused on defense. De Zerbi had earned the right for praise, making his name playing in a possession-based style in Serie C in 2014 before making his move to Serie A with Palermo in 2016 before getting sacked 3 months later. Paradoxically, it was his work in getting relegated with Benevento last season that brought his approach further into the footballing conscious. It was in the process of how he worked with a side facing relegation, eschewing the pragmatism of defending and countering by playing with the ball. He received the attention of Sassuolo, with each managerial move asking how far De Zerbi could actually take a team if he had the resources.

Guardiola wasn’t the only one to take notice. De Zerbi was a shock rumor to replace Ernesto Valverde at one point this season, with the Barcelona board impressed by his side’s “Barca style.” De Zerbi had almost moved to Spain last year, following in the footsteps of Quique Setien at Las Palmas before the move fell apart. As we documented last week with Gregg Berhalter, the initial shape of positional play starts with two center backs split wide and a midfielder dropping deep, but there are nuances in the purpose of possession and spacing. Whereas one idea is to stretch teams from sideline to sideline through quick switches of play, De Zerbi instead prefers a slow build-up between his backline in order to bait opposition to press. He desires to exploit space vertically as opposed to horizontally.

And although De Zerbi himself didn’t make the move to Barcelona, that dialogue and common language was established and played out in tangible ways. Kevin-Prince Boateng’s move to Barcelona over winter seemingly came from nowhere (and Boateng has just made 1 appearance since), but it was a symbol of admiration from the Spanish club. De Zerbi helped mediate the transfer, saying that even if Sassuolo got worse with his departure, he wouldn’t stand in the way of Boateng’s dream to change sides.

We’ve seen the influence of generational bridge-building between clubs make a tangible impact over the winter transfer window with Frenkie de Jong continuing the movement between Ajax and Barcelona. These kindred souls are bonded by a vision of how the game could be played, the supposed “the right way” with a focus on possession and attack. And though the connection between De Zerbi, Guardiola, Sassuolo and Barcelona seemingly came from left field, it would make sense that soccer follow the world in the reach and influence in which information is disseminated in the internet age.

At the time of Guardiola’s compliments, De Zerbi’s side were 8th in the league table, with 13 points through eight matches, including a win over Inter. But in a return to financial reality, Sassuolo currently sit 11th in the Serie A table, with 35 points. It’s exactly where they finished last season. After thanking Guardiola for the attention, De Zerbi was quick to add “I always feel like I could be sacked in two weeks and I don’t feel I have done anything yet.”

Regardless, Sassuolo CEO Giovanni Carnevali took pride in the name-check, saying that it was another sign that the club made the right hire in De Zerbi. In the past, we may have been quick to name De Zerbi the next great manager as a result of a few social media clips showing his side playing out of defense. But we might know too much now, especially in regards to seeing the struggles to adapt Maurizio Sarri’s possession style to another league. We can see the disconnect between playing proactive football with a side with less resources in contrast to doing so with a team filled with expectations and names. It is not a 1-to-1 translation. De Zerbi and the manager he was rumored to replace in Ernesto Valverde are working under two different contexts - so how do we determine the superior manager?

In that same sports festival where Guardiola noted De Zerbi’s work, perhaps the most profound comments were made by Sacchi, who pointed out that a team’s tactics are like a script in theater. It’s up to the players to follow the beats, plot points, and remember their lines. He compared a team without tactics to a Brechtian theory that “without a script, there is only improvisation and vague ideas,” adding that blockbuster movies with big names can also have no plot. In this metaphor, De Zerbi is in his critically-acclaimed independent phase of his career. What he loses or gains when he moves to the Hollywood stage remains to be seen, but that’s also a story we’ve seen before.