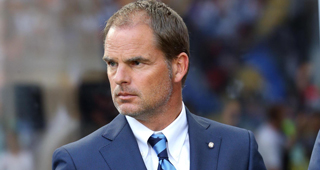 “It is going to be difficult if Frank says ‘this is what we did at Ajax’ and for me not to think that is a good idea”, exuded Crystal Palace chairman Steve Parish after hiring Frank de Boer as manager in late June. He continued that the manager’s six seasons with the Dutch side “exposed [him to] the absolute epitome of the perfectly run club”. Parish referenced all that came in the de Boer package with the emphasis on possession, innovative formations, and youth. Less than three months later, after four losses in four league matches to Huddersfield, Liverpool, Swansea, and Burnley, and zero goals, de Boer was let go. The Ajax-ization of Crystal Palace lasted 77 days.

The most surprising aspect of the firing was how little surprise there was. Implementing a Total Football style with Jason Puncheon and Luka Milivojevic pulling strings in the midfield of a 3-4-3 formation was unfair to both players. And there has been sympathy for the 47-year-old Dutch manager as well. The difficulty de Boer faced in shaping the Palace roster was exemplified by the team’s hire of Sam Allardyce and Roy Hodgson before and after him, neither of whom’s direct, counter attacking approach could be mistaken for idealists. Although it may not have been tactics or results that finally buried de Boer, but his lack of relationship with last season’s first team players like Martin Kelly and Joel Ward and breaking an agreement on the use of formations.

The move to hire de Boer, or the idea of de Boer, was a glimpse into the thought process of a side attempting to get out of the mid-table rat race. De Boer’s continental success symbolized the club’s ambitions to reach the next tier for a side that finished 14th, 15th, 10th, and 11th place in the last four seasons. Back in 2011, in more optimistic times, Parish marveled at how the game’s emotions short circuited otherwise brilliant business minds and pushed back against the idea that a club could spend their way into results. That latter thought signals a Moneyball approach, however that may be incorporated at a Premier League club - whether in attempts to use marginal improvements to move up the table or in de Boer’s case, zig when other clubs zag.

With only 77 days and four league matches to analyze, the results of Parish and de Boer’s experiment are remain inconclusive outside of Kelly and Ward’s inability to play in a three defender backline. The biggest disappointment must be in wasted time as Palace went back to basics with Hodgson. There was no grand lesson or growth. Even if Parish had the right initial thought of getting the mid-table hurdle by “pulling a rabbit out of the hat”, de Boer needed an entire preseason, new transfers and most of all, time.

A side can’t dip their toe into a paradigm shift in play, and the players that gave Palace their stability aren’t necessarily qualified to reach the Ajax utopia de Boer was brought into implement. It is a curse of a mid-table club where the solutions of survival are in the tried and tested. The formula was exemplified by Allardyce’s side last season: a target striker in Christian Benteke, pace and 1 on 1 ability on the wings with Wilfried Zaha and Andros Townsend, and physicality in transitions and defending. Although matches can get bogged down into hopeful moments of individual quality, it got the job done with the club avoiding relegation. Those sides won’t capture the imagination nor reach Twitter virality with passing sequences, but they will grind out results. Outside of bruised egos, it’s as if de Boer were never with the club in the first place.

De Boer lasted 85 days at his previous job last season with Inter, bringing his total to 162 combined days as manager in 14 months. It was just over a year ago when we were analyzing his 433 formation in lengthy blog posts and YouTube videos. The best excuse his supporters have is in coming into the side in August, as he did at Inter, and late June, as he did at Palace, of a lack of complete pre-season training to mold a side into his image. He has terrible timing at the very least.

Despite recent results, his six seasons at Ajax were impressive. In his final two seasons with the club, his 4-3-3 formation averaged 60% possession while scoring 149 goals in 68 matches. Parish’s observations of how successful businessmen get caught in the emotions and images of the game become more poignant here. Former Inter president Massimo Moratti said de Boer was “building something” at the club as he lost seven out of 14 Serie A matches. Like his Palace situation, the Dutch manager came into a physical team built for another manager, that time with two weeks before the season started. His Inter midfield of Gary Medel, Joao Mario and Geoffrey Kondogbia is hardly the trio for expansive football, and his firing was blamed more on Inter’s structural mess than anything reflecting his managerial ability. He does have a knack for finding the wrong situation on a short notice, which also gives him the benefit of the doubt.

In reading between the lines of those final two seasons at Ajax, there were whispers of a stale side running out of ideas and questions of his tactical growth. Those sides were targeted with the worst criticisms of the possession game in slow, horizontal passing and no plan B. His response relied on putting players in new positions as opposed to figuring out new solutions. One could also ask how his ideas translate outside of the Eredivisie, and to a squad without a financial or talent advantage as he enjoyed at Ajax.

Not to say that the Premier League and Serie A are the only barometers of a quality manager, but we still have no gauge of his level after 18 domestic matches in the last two seasons. De Boer is rumored to get his third opportunity, this time with Anderlecht and a pass into the Champions League. That situation replicates his Dutch success in its financial and squad quality in relation to the rest of the league. Plus, de Boer has the name and background to continue receiving opportunities. As one London paper described it, “Dutch football invented the 3-4-3 formation. Ajax used it for decades. Frank de Boer has been schooled in that system.” One can’t argue with any of the three assertions, regardless of tangible results.