Isco Caught Complaining About Role Under Zidane During Clasico 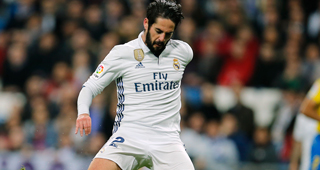 Isco was caught on camera during Saturday's Clasico complaining about his limited role on Real Madrid under Zinedine Zidane.

Isco was picked up by Movistar TV cameras talking to Luka Modric and Marcelo as they sat in the stands before the match.

"If [Zidane] has to take me off, he takes me off in the 50th or 60th minute, sometimes at half-time," Isco said, which led to laughter from his teammates. "If he has to bring me on, he brings me on in the 80th minute."

Zidane said he had "no doubts" about Isco, saying it was "a bad day, we want to change things, and Isco first of all."