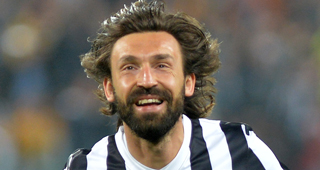 Pirlo was appointed manager of Juventus' Under-23 side just last month but has now signed a two-year contract to coach the first team.

"Today's choice is based on the belief that Pirlo has what it takes to lead from his debut on the bench an expert and talented squad to pursue new successes," Juve said in a statement.

"Today begins a new chapter of his career in the world of football, as it was said almost a week ago: from Maestro to Mister," it added.