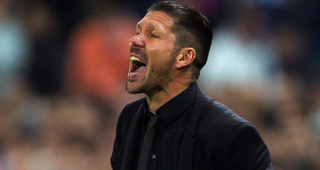 The transfer ban of Atletico Madrid has been upheld by the Court of Arbitration for Sport's (CAS).

In January 2016, Atletico and neighbours Real Madrid were banned from all transfers during the summer 2016 and winter 2017 windows after FIFA found they had on a number of occasions broken the laws regarding international transfers of players aged under 16.

Real Madrid had their punishment reduced by 50 percent and they can register new players beginning July 1st.

The three-judge tribunal has decided that Atletico's case was different and they must serve the ban in full as Barcelona did through 2015.

Atletico's statement read: "After the Court of Arbitration for Sport (CAS) has dismissed the appeal presented by Atletico de Madrid against the penalty imposed by FIFA's Disciplinary Committee on the case of registering players under age and that was ratified by FIFA's Appeal Committee, reducing the financial penalty, but maintaining the prohibition of registering licenses in the next transfer market period, our club wishes to state the following:

"1. We consider that the decision to support the prohibition of registering players in a second period, corresponding to the summer of 2017, supposes a comparative disadvantage and discriminatory treatment to our entity, since recently and in a similar case, the penalty was partially lifted, allowing to register players starting on July 1st. This ruling is unfair and causes an irreparable damage to our club.

"2. The resolution has been communicated after the time limit established in the agreement signed by the parts, which finished yesterday, May 31st, 2017. This shows a lack of respect for our institution.

"3. We want to reiterate that we have been penalised despite strictly complying with the Spanish legislation, as we have always processed all our licenses with Madrid's Football Federation, as the Sports Law indicates.

"4. Our sports planning for next season has contemplated at all times the two scenarios that could arise once CAS announced their decision. From this moment on, the club will move forward in the negotiations necessary to formalise the operations to register players from the 1st of January, when we will be authorized by FIFA to register new licenses.

"5. We have full confidence in our current squad, with which we have won direct passage to the Champions League for the fifth year in a row and have reached the semifinals of the Champions League and the Copa del Rey. The club has the commitment of the players and coaching staff to continue competing at the same level next season, despite this decision that is evidently detrimental to us. Together, team, club and supporters, we will continue to fight for our goals."