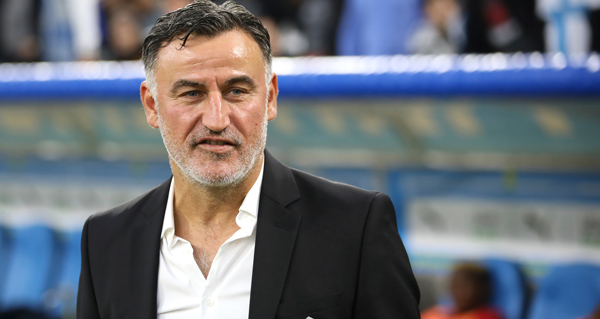 “Luis Campos was the architect of this team,” said Lille manager Christophe Galtier as his side celebrated winning the Ligue 1 title this season. Since the start of their modern era nine years ago, PSG have failed to win the league just twice. Monaco won Ligue 1 by eight points in 2017. Then, there was this year, with Galtier’s Lille beating PSG by one point following a 2-1 win over Angers on the final day of the season. In an era of one-club domestic dominance, an outside team winning the league is as celebrated a story as we have in the European game. But even more impressive is that Campos, who left Lille in the middle of this season, was the sporting director who built both teams that beat PSG in the league.

That 2017 Monaco side is obvious in hindsight. It featured the likes of Kylian Mbappe, Fabinho, Bernardo Silva, Benjamin Mendy, Thomas Lemar and Tiemoue Bakayoko - all of whom Campos bought then resold for exponential fees (he was also responsible for signing, then selling Anthony Martial). The Portuguese sporting director moved to Lille in 2017, where he made his mark in his first transfer window by signing Nicolas Pepe for just under $20 million before moving him to Arsenal for $88 million two years later. There was even movement before this title-winning season, with Victor Osimhen, signed from Belgium for $25 million in 2019, moving to Napoli for over three times that amount last summer. In total, Campos’ transfer market dealings have made Monaco and Lille over $700 million.

“I don’t want to appear arrogant but I assure you that I will create other masterpieces like this in my career,” Campos told Duncan Castles after his time in Monaco.

Campos also had a brief cameo appearance during the early days of Jose Mourinho’s Tottenham run, with Mourinho attempting to bring Campos to London. In fact, you could say Mourinho had an insight into what Lille would eventually accomplish by poaching the team’s goalkeeping coach Nuno Santos and assistant Joao Sacramento for $4.2 million. The raiding of brain power drew consternation from Galtier, who said that Mourinho was behaving “really classy” in destabilizing his side.

It wasn’t just the transfer market eye that Mourinho wanted from Campos, but the overall team-building. Signing young phenoms gets the headlines, yet equally as impressive is Campos’ ability to mix aging veterans in their 30s to lead the youth. His title-winning Monaco side featured a spine of over-30 players Falcao, Joao Moutinho, and Danijel Subasic. This Lille side is anchored by 30-year-old midfield Benjamin Andre and 37-year-old European Championship-winning captain Jose Fonte at centerback. Thirty-five-year-old Burak Yilmaz led the side with 15 goals.

The mixing of ages shows an extra knowing in player development. Even the young players emphasized the value of leadership and experience, with Jonathan David saying that he learns how to score from Yilmaz “day after day.” It is a holistic approach to squad-building that Campos touched on in the Castles’ interview when discussing why Premier League sides were weak in player recruitment, saying that English clubs hamper “top attacking players” by pairing them with “medium-quality defenses.”

“Successfully building a good team project always involves the ability of players to relate and ‘match’ each other...the great forwards who are already in the Premier League would be even better if they had the support of great fullbacks,” added Campos of why his style may not mesh in England’s culture.

And while Galtier shifted the attention towards Campos, the 54-year-old French manager delivered a balanced side. He went back to basics with a 4-4-2 counter-attacking style featuring a double pivot in midfield, inverted wingers moving into half-spaces to resemble a 4-2-2-2 in possession, and quick vertical play in transition. The title-winning formula was apparent with his side giving up 23 goals in 38 matches, the stingiest defense in the league by five goals (their Expected Goals Allowed of 26.7 goals shows an even higher separation from second place Monaco at 33.1 goals).

During an eleven-match unbeaten streak from January through March, Lille outscored opponents 17-3. In the eight matches to close out the season, Lille’s defense again stepped up by allowing just four goals. Similar to attacking teams going on goal-scoring runs, there were stretches where Lille simply did not give up goals. Lille finished with 21 clean sheets in total, giving up multiple goals just four times over the season.

With Galtier this season and Leonardo Jardim leading the 2017 Monaco side, Campos deserves credit for his choice in managers. Galtier and Jardim were simultaneously responsible for getting results and increasing player values in some varied order. Galtier has the additional burden of being the most sought-after French manager in the club game, imparting upon him an extra weight should he move to another country. But Galtier is also unique in his stability, managing just two clubs throughout his professional career: there were eight years with St. Etienne from 2009-2017, then Lille for the past four seasons.

As for the players, the rest of Europe would inevitably take notice. It was appropriate that the first to leave was 25-year-old keeper Mike Maignan, whom AC Milan bought for $15 million (Lille paid PSG just $1 million for Maignan in 2015). And this is only the beginning: midfielder Renato Sanches, signed for $22 million from Bayern Munich in 2019, is reportedly valued at over $80 million and has drawn interest from Roma. Boubakary Soumare, a free transfer from PSG in 2017, is linked with a move to Leicester City for $30 million. 21-year-old centerback Sven Botman, purchased from Ajax last summer for $8.8 million, is perennially rumored as a Liverpool candidate.

As we mourn the end of a brief championship cycle, Lille have done this before. They won the league in 2011, led by the likes of Yohan Cabaye, Idrissa Gueye, Gervinho, and of course, Eden Hazard, all before getting picked apart. We realize how talented that 2011 squad actually was as years pass. And looking at the core of this Lille squad, we have an inkling of how it will age when looking back years from now. These single-season title-winning teams surprise in the moment, but they always seem obvious in hindsight.

Immediately after the season’s end, Galtier announced that he would be leaving Lille. He is now linked with Nice, Lazio, and Tottenham. Campos is also linked with Tottenham and Nice, with the Real Madrid rumor dotted in. We are firmly in summer rumor mill season.

These are the double-edged stakes for clubs like Lille in the Super League era. It’s not just the players that well-resourced teams are attracted to, but also the brains behind leveraging the transfer market and building a Champions League side to complete a global brand. The constraints of the modern game make it almost impossible for midtable sides to build long-lasting dynasties. But Lille present a blueprint for what can happen when smart player recruitment and a manager ready to take the next step peak together for one season. In fact, that we know what happens next makes us appreciate them more in real time. The larger clubs have their multiyear title runs, but these singular seasons also live on in memory just the same.