Graham Potter, The Limitations Of Expected Goals, The Brighton Paradox 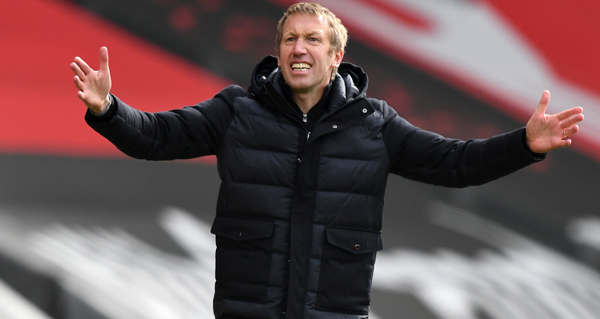 “When a measure becomes a target, it ceases to be a good measure,” goes the quote now attributed as Goodhart’s Law, named after the British economist Charles Goodhart. And while the quote was actually coined by anthropologist Marilyn Strathern, the idea that over-optimizing for certain metrics creates unintended consequences, remains. Brighton & Hove Albion would be in eighth place in the Premier League, contending for a Europa League position, if the table were organized by Expected Goals (xG). Even further, they would be fifth in the league if the season were ranked by the Expected Goal Difference per 90 minutes, only behind Manchester City, Chelsea, Liverpool, and Manchester United.

In reality, Graham Potter’s side are currently in 17th place, just seven points ahead of relegation.

Brighton have other playful numerical contradictions (provided you’re not a supporter). They have yet to beat the three teams in relegation in six matches, but beat Tottenham and Liverpool in back-to-back matches over the winter. They are tied with Chelsea for conceding the third fewest shots per match, only trailing City and Liverpool. With an xG of just under 46 goals, they’ve scored just 33 goals in the league.

So we can expect Potter’s side to close out the season with several five goal matches and move into mid-table, right? Something has to give. After all, we’re told that teams eventually level out to their mean - unless they don’t. And at some point, the descriptions change from being unlucky to becoming a meme for a side that regularly outperform their underlying analytics yet still lose (there’s an eight minute compilation dedicated to the side missing easy chances after their intricate buildup play).

That differentiation between theory and results gives more fuel for analysts and managers who revel in the pragmatics of the sport. The masterpiece was in a 2-1 February loss to Crystal Palace in which they outshot their opponents 24-3, with both of Palace’s goals coming in injury time.

“Even if you win the game, how many times would you have won it if you had played the game 10 times?” asked Potter. And while we get his point, Palace manager Roy Hodgson countered after his side’s win that “the statistic that counts at the end of the day is goals against and goals for.”

Taking away the underlying metics, the lack of goalscorers is clear. Neal Maupay leads the team with eight goals (though he should have over 12 by xG, which represents the difference between being in the top 10 in the league versus somewhere in the middle 20s). But Maupay’s tally is double second place on the team, highlighting an obvious problem. The easy conclusion is that Brighton need more goal scorers - but would they automatically transform into the European contenders their numbers suggest just by signing 20 goal scorers in the transfer window? As we’ve learned, that focus on numbers would then cause another imbalance elsewhere on the team.

As we mock Brighton for failing to live up to their Europa League numbers, they are only the 14th most valuable squad in England despite analytically competing with (and ranking above) squads four times their value. Far from signing the next phenom, Maupay is the most expensive signing in club history at a relatively modest $24 million. Taking away public reaction, this team is actually working, punching above their weight. Brighton should be held as a triumph of analytics.

But still, they are just one point from relegation.

The bookish, well-traveled perception of Potter fits the focus on analytics. The 45-year-old famously (infamously?) completed a master’s degree in leadership and emotional intelligence, immediately separating him from our rough and tumble stereotype of traditional English managers. His seven years in Sweden playing a possession-based 3-5-2 formation further differentiated himself from the individual nature of 4-4-2 battles. He’s continued using this three defender backline since coming to Brighton in 2019, switching between a 3-4-3 and 3-5-2 formation centered around creating wide overloads one expects from a manager inspired by the likes of Roberto Martinez and Pep Guardiola.

“We were in front of the best English manager right now,” complimented Guardiola of Potter after City’s 1-0 win in January.

At some point, the public adulation without the results loses its charm on supporters (who wants to perennially be the critically acclaimed but overlooked team?). The focus on xG feels very much Soccer Moneyball 1.0, with the most innovative sides today measuring actions without the ball. Thus, Potter, despite his new age perception, is a throwback to a possession era that is no longer at the forefront of the game.

The additions of Adam Lallana and Danny Welbeck last summer further cemented Brighton’s fate. The two players were free transfers, showing an eye for value in the transfer market essential for a side outside of the league’s superpowers. But with reputations for their link-up ability while lacking the final product, they have, on cue, combined for five goals in 47 matches. That perspective makes the xG obsession and lack of goals a punishment in squad building: if you build a roster with attackers who don’t score goals, you get what you deserve. Brighton’s gap between xG and goals isn’t an outcome of luck, but rather of design.

And with such a difference between underlying analytics and table place, who is Potter performing for exactly? As Brighton battle relegation, Potter’s reputation only increases to create a paradoxical situation where the worse his side does, the more his unluckiness - and thereby intelligence - stands out. Potter has been linked with Tottenham and England, much to the befuddlement of Brighton supporters who simply would like their club to avoid relegation. In terms of perception, it is sometimes better to be unlucky and lose than grind out mid-table results.

On the other hand, this is also what Brighton signed up for. Club owner and chairman Tony Bloom made his fortune through a sports gambling empire that mimics his side’s season, searching for inefficiencies through underlying metrics and betting heavily against traditional sportsbooks. Potter's idea of “playing the game out of 10 times” surely resonates with a gambling mentality that emphasizes the process of finding value over results. Of course, the scale differs between betting on thousands of games per year versus a 38-game season, but Potter appears to be secure even with the relegation struggles.

“The chairman isn’t a normal guy - he’s not like you or me, or the vast majority of people in football,” implored Potter.

We’re only at the beginning of these debates, with the signing of astrophysicists becoming as applauded as players or managers. But we’re also used to this to a certain extent. The tiki-taka era stressed possession percentages and pass completions, with teams criticized for having possession for the sake of possession. And focusing on only winning leads to dour pragmatic sides that turn into discussions about entertainment versus results. The arguments and nuances are endless, with analytics seemingly raising even more questions for every one it solves. It all somehow leads us back to finding reprieve in the concrete, tangibleness of the league table.