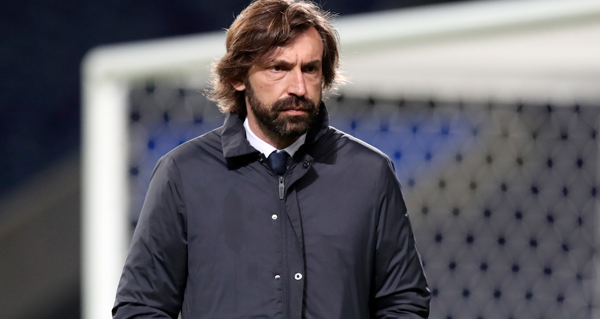 The evidence was undeniable, the moment frozen in screenshots retweeted through the timeline. Porto midfielder Sergio Oliveira’s tie-winning free kick in the 115th minute in the second leg of the round of 16 slid under Cristiano Ronaldo, who had turned his back and jumped. Knocked out of the Champions League and unlikely to win Serie A for the first time in ten years, the criticism poured in. Fabio Capello criticized the players in the wall for a lack of courage, calling the elimination due to fear of getting hit with a ball “inexcusable.” Former Juventus striker Nicola Amoruso piled on, adding that Ronaldo doesn’t want to get hit in the face with the ball because he cares too much about his image.

First-year Juventus manager Andrea Pirlo limply defended his players with excuses as rumors swirled over Maurizio Sarri re-taking his job. But nowhere was a free kick goal underneath a jumping wall in a Champions League knockout match covered in Pirlo’s thesis to graduate from Coverciano, the Italian school responsible for shaping the top managers. In fact, we know for certain as his work was released online. Pirlo documented how he wanted his team to play in his dissertation titled “The Football I Would Like,” focusing on attacking and possession-based football.

“The foundation on which my football is played is the desire to play an intentional, possession-based attack football,” Pirlo begins, before naming his influences in the usual Ajax and Barcelona models.

The boredom of defending free kicks seems vulgar by comparison, and it is unique that we get to see a manager’s ideas outlined from a first-person perspective. Pirlo whittled down his principles of buildup play into the CARP acronym featuring playing out of the back, width, penetration in the final third, and getting players in behind defenses. A formation then shouldn’t matter as long as those basic fundamentals are met, with Juventus moving back and forth between a 4-4-2 and three-defender backline (they defend in a 4-4-2). He doesn’t focus so much on shapes as much as filling in the open spaces - whether wide, in between the lines, or running beyond - encouraging intuitive, improvised rotations between attackers that are difficult to gameplan against.

Yet when results don’t match the theory, the documentation of one’s philosophical ideals can appear to be naive. Possession, passing, and triangular shapes look impressive and agreeable on paper (literally, in this case). But to actually dig out difficult results in Champions League knockout matches? It could be the less glamorous topics of defending, gamesmanship, and set pieces.

In his defense, Pirlo, who had no prior management experience at any level before this current senior job, wasn’t even supposed to be here to begin with. He was originally hired as the club’s U23 manager where he could learn his craft away from the spotlight. Just nine days later, he was promoted to the senior side.

His first-year struggles present another layer to other former superstar players turned managers like Thierry Henry and Steven Gerrard. Of the trio, we would have assumed Pirlo having the easiest transition to management considering how much he already organized his team in his deep-lying midfield role. It is very much too early to deliver a final verdict on Pirlo’s career, but Juventus as any manager’s first job is almost set up to fail by expectations and scale alone.

Even with Juventus in third place and out of Europe, is Pirlo actually enacting his vision? Juventus lead Italy with 86.6% passing accuracy, are second in possession behind Sassuolo, and also have the largest Expected Goal Difference per 90 minutes in the league. They also have Serie A’s stingiest defense, having given up just 22 goals over 26 matches. What if Pirlo was just unlucky and actually having a good debut season despite the lack of success in the league or Europe?

Outside of tactics, there are, of course, the realities of dealing with superstar egos. In Ronaldo, Pirlo has the most modern superstar at his most difficult moment. Ronaldo still carries the weight, glamor, and salary of his past but at 36 years old, neither the speed or athleticism. Politically, he is impossible to bench. He remains productive on the field with 23 goals in 23 matches. But beyond the numbers is his clash against Pirlo’s underlying philosophy. In attempting to retrofit Ronaldo into the CARP acronym, he neither has the dynamism to provide the width, the passing to play into between the lines, or the speed to get behind defenses. He is a goalscorer, and arguably the best one in the world today. And it is the most decisive skill in the sport, but at what expense?

A thesis on building a modern lineup around an aging superstar would have been insightful as that challenge has tripped up managers far before Pirlo. Also famous for his possession-based attacking philosophy, Sarri accepted the pragmatism and trade-offs of using Ronaldo last season, creating a style that seemed more like 10 players plus Ronaldo scoring goals. You could ask how resilient a system is if one striker can unbalance an entire way, or that single thread could also show how collective today’s game has become.

With the Champions League and domestic trophy both out of reach, Ronaldo turned the spotlight back onto himself. After scoring a hat-trick against Cagliari, Ronaldo declared on Instagram that he had officially scored more career goals than Pele with 770. Were such claims appropriate considering the context of the season? But no matter what, regardless of winning or losing in the Champions League or Serie A, the corporation of Ronaldo rolls on.

More than any team in recent years, Juventus have been defined by their relationship to the Champions League. Ronaldo’s record-signing in 2018 was a result of this obsession, with his big-match aura seen as the final piece to a trophy they last won in 1996. In the three years since his signing, Juventus have been knocked out in the quarterfinals and twice in the round of 16 to Ajax, Lyon, and now Porto.

There was a sense of poetic justice on social media following Juventus’ losses in the Champions League. Chairman Andrea Agnelli has been particularly vocal about the formation of a European Super League to keep up with modern forms of sports consumption, a conversation re-ignited by the opportunity to replace billions in lost income incurred over the pandemic. Many were quick to note that Ajax, Lyon, and Porto would not have an automatic placement in Agnelli’s Super League, and that those upsets are evidence enough to justify the existence of the current format.

We first covered this new era of Juventus back in 2017, following the release of a new logo that clashed sharply with their Serie A peers. It was a sign of a club modernizing its own message as more than a soccer team but a lifestyle brand. Ronaldo soon followed. There are a lot of symbols though still no European trophy. We’re seeing the cycle of soccer’s branding age play out in real time. At some point, players get old and the reputation precedes the production. But there’s too much at stake off the field, still more worldwide attention to be won. We have to maintain our appearances.