Diego Simeone, Marcos Llorente, And The Search For Another Griezmann 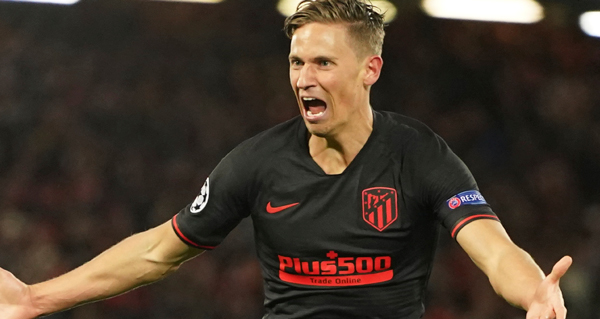 “I saw [Antoine] Griezmann could play as a support striker or a target man when everyone said he was a winger,” said Diego Simeone of developing former box-to-box midfielder Marcos Llorente into a striker while the La Liga season was suspended. In uncovering and refining Llorente’s match-winning ability in the final third seemingly out of thin air, Simeone attempted to remind critics that he too had an eye for attacking talent despite his defensive reputation. Llorente’s evolution was as essential to Atletico Madrid’s season as it was a byproduct of happenstance. Simeone stated before the restart that Diego Costa and Alvaro Morata, Atletico Madrid’s two best pure strikers, could not play together in the same lineup.

“I do not have a team prepared to support the two forwards,” explained Simeone, adding that Llorente’s energy gave his side an extra player to balance out the midfield, as well as taking advantage of his ability to arrive late inside the box.

Simeone’s comments could appear as an indictment upon his own inability to build a team, which would have raised more controversy had it been said by a manager so not entrenched within the club fabric. How many summers has Simeone had to find goalscorers, especially considering the lack of goals from midfield? From the time Costa left for Chelsea in 2014, there was: Mario Mandzukic, Raul Jiminez, Jackson Martinez, Fernando Torres, Luciano Vietto, and Kevin Gameiro, with only Griezmann finding stability. Each season began with new attacking talents signaling new possibilities. Then, Simeone would inevitably go back to his tried and true of grinding out 1-0 matches. There should have been some long-term replacement by now, a signal that Simeone has learned something in the past six years when it comes to building his attack.

A Simeone side invites the grind both on the field and off it, with the constant pressure and rumors of stagnation. No top side in Europe needed a break more than Atleti. The low point of their season came during a January run that included a loss to a third-division side in the Copa del Rey. There were discussions soon after of whether Simeone’s ideas had grown stale. Even more impactfully, Atleti went into the lockdown outside of a Champions League position, one point behind Getafe in fifth place. Especially considering the uncertainty of the game’s economic future and the loss of revenue without supporters, anything less than a Champions League position would have been devastating for a club continuing to evolve as a signature European side. With the likes of Jan Oblak on over $450,000 per week, Simeone would have had to clear out the stalwarts within their roster, without even mentioning his own future.

The desperation even prompted club CEO Miguel Angel Gil to visit players before the season resumed, reminding them of their Champions League ambitions.

Simeone, Gil, and the rest of Atleti’s board can relax now, with the club in third place and firmly in the Champions League for next season. Atleti have five wins and three draws since the restart, outscoring opponents 16-5. The run includes offensive explosions (relatively speaking to Simeone) of five and three goal matches, in addition to two trademark 1-0 wins. The five substitution rule has allowed Simeone to bring on the likes of Costa, Morata, Llorente, Yannick Carrasco, Angel Correa, Vitolo, or Joao Felix to change a match. Eight different players have scored, with Morata leading the line with four goals.

We say this every season, but Simeone may have stumbled upon an attacking duo for the future in the 27-year-old Morata and 25-year-old Llorente. And for all of the resources and planning devoted to analytics and scouting, there is still space for chance to reshape a season, and possibly, a mini-era. Llorente was originally signed from Real Madrid for $33 million last summer to add dynamism alongside Thomas Partey in midfield. With desperation an ingredient of creativity, Simeone subbed Llorente on for Costa in the 56th minute in the second leg of a round of 16 Champions League match against Liverpool. Down 2-1 at the time, Llorente’s first goal in the 97th minute won the tie. Yet it was his second goal, in which he patiently waited for a space to open before beating three defenders with a curling shot, that showed how his decisive ability in the final third was more than a one-off moment.

“I’m not used to being in those situations,” said Llorente of finding himself in a scoring position following the match. That was just four months ago. He’s started six out of eight matches as a second striker following the resumption of the season.

Though Llorente’s newfound role leaves out Felix, the $138 million summer signing who was originally supposed to take up that position behind the striker. With that investment, Simeone is practically forced to fit Felix into the lineup, no matter how awkward the fit. Plus, the inability of Simeone to get world-class production out of the club’s record signing would further add to the narrative of high-priced attacking failures in the transfer market.

Throughout his nine seasons as Atleti manager, his most talented striker partnership would have been an early-in-the-decade Costa paired with a late-in-the-decade Griezmann, blending running, pressing, a love for suffering, and an ability to create a goal out of wayward long ball clearances. They show the importance of duos playing off each other, especially without the ball. The lead striker threatens to stretch play, creating space for the savvy second striker. Yet for all of the difficulty in replacing strikers who have found success under Simeone, like Costa, Griezmann, David Villa, and Raul Garcia, the search seems increasingly straightforward with the advancement of analytics - or at least through reflecting upon the misses.

We know that success or failure at Atleti leads through one person. Simeone once blamed himself after Martinez, a $35 million transfer, lasted just 6 months with the club in 2015. Martinez scored two goals in 15 matches with the team after recording 21 goals in 30 matches the season before at Porto.

“But I am not going to change my way of playing,” said Simeone after the apology.

“I don’t understand with the quality they have the football they play. They could play proper football,” complained Klopp about Atleti following the Champions League loss.

When does a scrappy upstart become perceived as royalty? Far from their introduction to the world footballing consciousness as the outside fighters making the most of limited resources during their Champions League run in 2014, Atleti today spend money as well as any Spanish team outside of Real Madrid and Barcelona. They’ve created their own second tier in La Liga, not quite on the level of the two signature clubs, but able to consistently rely upon Champions League funding.

There have frequently been whispers about Simeone one day leaving for Inter. But somehow, despite their struggles just six months earlier, this current moment is as stable as Atleti have been since the Argentine took over. While longtime assistant Monos Burgos will leave after the season, the side’s goalscoring potential hints at new possibilities, growth, and emotional optimism. Whether through nine-figure transfers or an unforeseen change of positions, the final table doesn’t care if a side finds goals by planning or chance. Regardless of five-goal outbursts or 1-0 struggles, the three points are all the same.