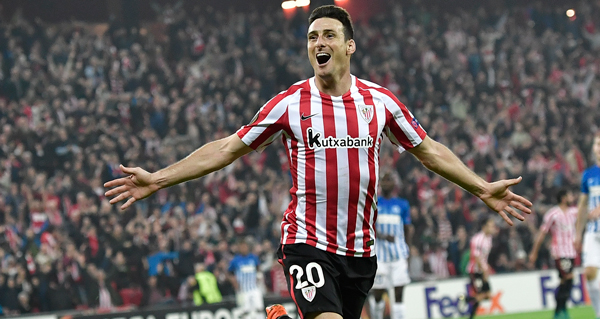 Aritz Aduriz was only on the field for a minute against Barcelona in the opening match of this La Liga season. Having replaced Inaki Williams in the 88th minute during a tight 0-0 match at San Mames Stadium, Athletic Bilbao manager Gaizka Garitano threw on Aduriz with the hope that maybe he could make something out of his side’s desperate, wayward crosses. The reward was immediate: Aduriz found space inside the box in front of Barcelona’s backline, calculated an incoming cross, and hit a bicycle goal to win the match. That goal, one he described as “beautiful” following the match, would be his last. The 39-year-old striker retired with 11 matches remaining in the suspended La Liga schedule, adding that he was in urgent need of hip replacement surgery from the everyday grind of an 18-year professional career.

But the league was a side note, with Athletic firmly in 10th place on the table. Aduriz’s loss was felt in the anticipation of the upcoming Copa del Rey final against Real Sociedad. Described as the “showpiece event” of Spanish football and “the biggest game of any season, ever,” the final was to be a celebration of Basque sport and culture. Such was the importance of the occasion that presidents from both clubs agreed to not play the match without supporters. It was also lining up as the fairytale final match for Aduritz, who was born in San Sebastian and joined Athletic’s youth academy in 2000. Dani Ruiz Basan, the last Athletic captain to win the Copa del Rey back in 1984, said that he wanted Aduriz to be the next captain to lift the trophy.

“Let’s forget about that finals we dreamt about,” said Aduriz, dashing fantasy with the limitations of the human body.

Aduriz appeared immortal. His late-blooming career trajectory made it seem like he’d always keep improving, regardless of age. Aduriz made his senior side debut for Athletic in 2002, where he scored a total of 92 goals across 304 matches over the next nine years. After short stints in Mallorca and Valencia, he returned to Athletic under Marcelo Bielsa in 2012 at age 31 for just $2.7 million (his transfer value never rose above $6.6 million). He would proceed to score 149 goals across 313 matches since, including a run of 26 goals, 36 goals, 24 goals, and 20 goals from 2015 through 2018. He almost averaged either an assist or a goal per match in 2014 and 2016. He scored the most Europa League goals in 2016 and tied for the lead in 2018.

Former manager Ernesto Valverde once described Aduriz as “a special case,” saying how it’s “unusual to see strikers like him with his age.”

Aduriz’s target striker abilities were an outlier in Spain. Athletic already had a reputation as the most direct team in La Liga, with Aduriz replacing the 6-foot-4 Fernando Llorente in Bielsa’s side (Aduriz would also replace Llorente for his Spain debut at the age of 29). Consider the styles of strikers used on the Spanish national team during recent major tournaments: Fernando Torres, a direct, pacy striker, scored the match-winning goal against Germany to win the 2008 Euros. David Villa, whose combination of skill, cunning, and movement naturally fit into a brand defined by midfield passing, lead the line against the Netherlands in the 2010 World Cup Final. Manager Vicente del Bosque didn’t even bother to pick a striker in 2012 Euro final, instead playing Cesc Fabregas as a false 9.

With Spain’s emphasis so weighted towards its technical midfielders, the striker position seemed to be treated as a necessary evil. They weren’t there to participate in the changes of tempo, the one-touch sequences, or defense splitting passes that garnered YouTube compilations, nor were they asked to hit long-range, top corner shots out of nowhere (might as well recycle play back to the midfield). Strikers were meant to keep defensive lines away from the side’s playmakers. They were bystanders and abstract threats, but never participants.

Even as Spain aimed to play more directly during their disastrous 2014 World Cup campaign, it was Diego Costa leading the line. When Aduriz finally received his chance during the 2016 Euros, he still sat behind Alvaro Morata. It was as if Del Bosque was forced to choose Aduriz out of a lack of options than his form, describing him (simply) as a “traditional centre-forward that everyone likes.” Even Del Bosque’s replacement Julen Lopetegui only kept him on the squad “because he is a fantastic professional.” Aduriz scored just two goals in 13 matches for Spain across seven years. Naturally, he is the national team’s oldest goalscorer at 35 years and 275 days (he is also the leading scorer of the Basque Country national team, with 12 goals spread out through 13 years).

“Age is just a number,” said Aduriz after getting called back up to the national team in 2016. “Desire is what counts.”

Not to say that Spain should have built an entire team around Aduriz. And from tiki-taka to gegenpressing, every top side strives to have a distinct style and identity. But even the most successful paradigms have their blindspots in the skillsets that get overlooked.

Though Aduritz also needed time, as even Diego Forlan wrote that his control and technique improved with experience. Maybe those inside-the-box, aerial instincts had to be honed over the years. Aduriz once explained that he didn’t necessarily believe goal-scoring was an innate ability, but something to be learned and developed. Valverde described his style as a danger “every time the ball is in the air in the box,” but like Del Bosque’s observation, that statement could come off as a backhanded compliment considering the context, as if Aduriz weren’t good enough to play within Spain’s possession system. Even his one-step technique on penalties is a testament to directness at the expense of cleverness.

Yet the target striker is thought of as a position for late developers. It could be something in the refining and reading of play, of learning how to become more efficient and control matches through physicality and positioning as opposed to the intuitive brilliance of dribblers. Maybe no one was wrong in Aduriz’s case, and he was never going to be what he became without a decade of struggle and study. And maybe his career unfolded exactly as it should have.

Aduriz’s retirement is one of many stories overshadowed during the past months. It is a footnote in the global pandemic, but still another reminder of the mortality of an athlete’s career even as the sport shuts down. Hakim Ziyech said that one of his regrets was how he never got to properly say goodbye to Ajax supporters before his upcoming move to Chelsea. Likewise, we never got the chance to properly celebrate Aduriz during his final matches.

“I’ll only leave football when I no longer enjoy it,” said Aduritz in 2016, after scoring his 30th goal of that season at the age of 35. That optimism was of its time, back when players could dictate their futures instead of being at the mercy of a global pandemic. There is another world in which Aduriz leaves the field in adoration following the historic all-Basque final. What we got instead was the opposite, just a tweet and a retreat into the digital world. We can take solace in knowing that Aduriz got everything out of his ability, and that there was nothing more for his body to give.