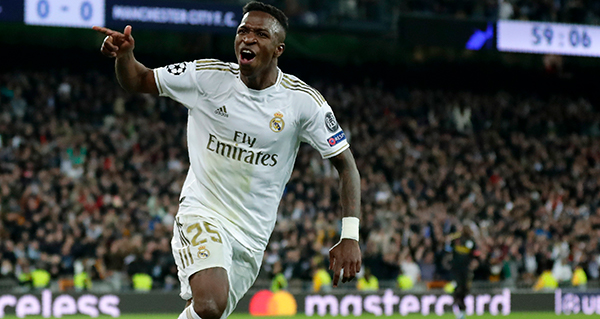 Tied 0-0 in the 71st minute of the biggest club match in European soccer, Vincius Junior played a seemingly harmless backpass to Toni Kroos in Barcelona’s half. With Arthur failing to close down the German midfielder, Kroos began conducting. He pointed to the open space behind Barcelona’s backline before delivering a pass that split Nelson Semedo and Martin Braithwaite. Vinicius picked up the ball just outside Barcelona’s box and dribbled inside where he had two options: cross the ball or shoot. He chose the latter, and with a slight deflection from Gerard Pique, scored the go-ahead goal in Madrid’s eventual 2-0 win. The 19-year-old Brazilian also became the youngest foreigner to score in El Clasico, beating Lionel Messi by 29 days.

Vinicius’ moment was a long way from the player we saw break into tears last September after scoring against Osasuna, breaking a goal drought. And no one would mistake La Liga for Vinicius’ league despite the symbolism of besting Messi, when in fact he has been criticized for scoring just 4 goals in 36 league matches. But it was the second time in a matter of days that he played a decisive role on a big stage. In Real Madrid’s midweek match against Manchester City, Vinicius pressed Kyle Walker and won the ball before playing a pass to Isco for the game’s opener.

And there were other warnings of Vinicius’ ability to create something out of nothing in important matches. He somehow found enough space to pass through three Atletico Madrid defenders in creating the lone goal of a 1-0 win over their city rivals. At one point in danger of being labeled as a much-hyped transfer flop, he was voted Real Madrid’s player of the month for February after being inserted into the lineup due to Eden Hazard’s ankle injury.

But Vinicius wasn’t the only Brazilian winger on Real Madrid to single-handedly change a match in the past two weeks. The 19-year-old Rodrygo received the ball at midfield for Madrid’s B team, outran two defenders and neatly chipped 33-year-old San Sebastian keeper Xabi Irureta. He would then receive a red card for taunting Irureta following the goal, thereby making him ineligible for El Clasico. Not that the ban would dampen his first year in Spain. Rodrygo scored in his Real Madrid debut in September. He then became the second youngest player ever to score a hattrick in the Champions League during a 6-0 win over Galatasaray.

“I haven’t really had much adapting to do, because the Brazilians who were already here have given me all the support you need when you go to another country,” said Rodrygo, who also admitted to shaking when he first met Zinedine Zidane.

Vinicius’ and Rodrygo’s impact, even as teenagers, was carefully planned by a relatively unknown figure in Real Madrid’s boardroom. The 45-year-old Brazilian scout Juni Calafat joined the team as its chief South American scout, though he remains so anonymous as to not have his own Wikipedia page. Calafat would spearhead the Brazilian resurgence as a form of Moneyball within the economics of the new, global footballing world. Both wingers didn’t come cheap, especially with a lack of European experience heightening the risk: Vinicius cost $49 million as a 17-year-old from Flamengo. An 18-year-old Rodrygo cost $50 million last summer from Santos.

Calafat was also instrumental in persuading 22-year-old Brazilian centerback Eder Militao to move from Porto to Spain for $55 million. During the most recent January window, the club signed 17-year-old midfielder Reinier from Flamengo for $33 million. That signing especially brought backlash on social media, invoking images of YouTube highlights and compilations like Kerlon’s seal dribble overhyping otherwise mediocre talents. Yet Vinicius and Rodrygo show that there is match-winning substance to Calafat’s signings. It is also interesting to note how both wingers are comfortable in receiving the ball from the left before cutting into the field on their favored right foot.

That Vinicius and Rodrygo seamlessly transitioned from Brazil to a top European league without a middle step is surprising. Perhaps it is a sign of the prodigal talent of both wingers. Portugal is the obvious next stage for Brazilian players due to the language similarities and tradition of talent development. But for Rodrygo to go from Brasileirao to scoring hat tricks in Champions League matches, to a potential call-up to the national team, in under a year?

But even with their impact, one wonders if they would have been even better served playing full matches somewhere in the lower leagues. As former Real Madrid player and Brazilian Savio Bortolini explained, jumping from Brazil to Spain without an intermediary level means that Vinicius is figuring out his career “without being 100% developed.” In another world, Vinicius could have worked on his decision making and shooting away from a worldwide audience in Portugal. Today, those teenage mistakes are picked apart by millions across the world on social media.

Of course, it was only a matter of time before other European sides caught on and pointed their scouting attention towards Brazil. Arsenal technical director and former Corinthians player Edu signed 18-year-old Gabriel Martinelli, who Ronaldinho compared to Ronaldo, for a relatively cheap investment of $7.7 million last summer. Like Vinicius and Rodrygo, Martinelli was immediately thrown onto the largest stage without an intermediary step, announcing himself with this one-player counter attack goal against Chelsea.

And it continues. Calafat’s scouting ability started a race to discover the top Brazilian players at every age group, according to Spanish analysts. Arsenal and Tottenham are linked with 16-year-old Fluminense forward Miguel Silveira, who has a reported buyout clause of $39 million. And while Premier League sides finding a 16-year-old in Brazil is impressive, we must not mistake ourselves as “Calafat is certain to know about him already.”

The signings of Vinicius, Rodrygo, and Reinier take on an added poignancy with Manchester City receiving a Champions League ban due to breaking Financial Fair Play regulations. The sanctions provoked a back and forth between Guardiola and Barcelona, with the Spanish manager warning his former club not to “talk too loud” about the allegations. The outburst symbolized how the roles somehow switched over the decade: Real Madrid are investing heavily into developing young players, while Barcelona are the ones buying established, superstar names that may or may not fit into the larger team.

“It was one of the worst Real Madrid sides I’ve faced at the Bernabeu,” taunted Pique following Barcelona’s loss in El Clasico.

Pique’s comments only revealed half of the story: it was one of the worst-played El Clasico matches in years. Even Messi gave away the ball 17 times during the match, leading Quique Setien to wonder if Barcelona players were passing the ball to him too often. The lack of quality lead to an existential question on the state of the match watched by over 650 million viewers worldwide. What superstars will carry the match in this next generation? What is the role of El Clasico in a changing footballing environment?

Though as we saw with Vinicius, El Clasico still has the ability to make stars and change the perception of careers. One newspaper wrote that his goal allowed Vinicius to leave “behind the caricature” of a winger who has an “emporium of dribbles without scoring.” One of the highlights of the game was Ronaldo returning to the Bernabeu and celebrating Vinicius’ opener. El Clasico may lack the quality of its Golden Age at the turn of the decade, but it can still create a myth all the same.