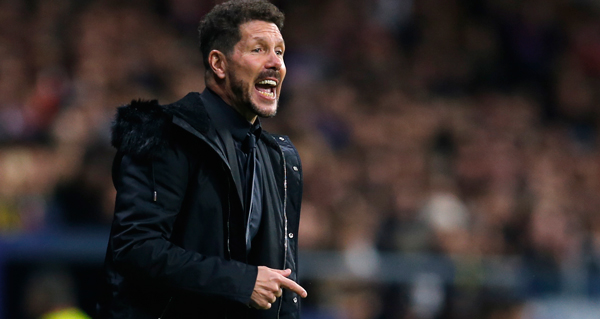 “We should be responsible and value who we are, where we are, and what we have achieved with this coaching staff,” reminded Atletico Madrid CEO Miguel Angel Gil Marin to club supporters following a 2-1 loss to Cultural Leonesa, a third-division club, in the Copa del Rey round of 32 last month. Gil Marin’s defense of Diego Simeone was a result from the fallout of a 3-match sequence that began with losses to Real Madrid in the final of the Spanish Super Cup and a 2-0 loss to Eibar in the league. Though most of all, the frustration was born out of existential stasis, that Simeone would never be able to evolve out of his demanding 4-4-2 style.

Simeone has experienced more hurtful losses during his time with Atleti, like the 2016 Champions League Final defeat to Real Madrid in penalties after which he almost left the club, but Cultural was his most embarrassing. Saul remarked that he had never experienced anything like it during his seven years with the senior side. Simeone reiterated his commitment to the Atleti cause, saying that no loss, whether on the biggest stage of Europe or to an amateur side in the third division, would make him waiver on his dedication. He instead took a pragmatic view of his side’s recent disappointments, blaming a lack of scoring without injured strikers Diego Costa and Alvaro Morata. Their 23 La Liga goals in 23 matches are more than doubled by Barcelona.

Still, to even consider sacking Simeone is unthinkable. Is there any other manager as synonymous with a team? It’s supposed to be the Argentine who has the power to leave; he’s the one supposedly doing the club a favor by remaining all these years, eschewing lucrative opportunities. But there is a precedence. In 2011, the last time Atleti lost in the round of 32 of the Copa del Rey, the club sacked Gregorio Manzano for Simeone.

“Sure, sack Manzano. But after they have sacked him, then what will they do?” asked one Spanish radio journalist back in 2011. The club had gone through 16 managers between 1996 and 2011. More than his seven trophies, Simeone brought stability.

But to compound the situation, Atleti lost again 1-0 to Real Madrid the week after the Cultural embarrassment. Zinedine Zidane imposed himself in the match, taking off Toni Kroos and Isco at halftime for the directness of Lucas Vazquez and Vinicius Jr. (it was the Brazilian’s quick footwork that created space for the lone goal). Columnists piled on the “limp and lifeless” Atleti side, proclaiming it was time for Simeone to finally leave. Even Real Madrid supporters got their shots in, chanting  “Cholo, don’t go! Cholo, stay!”

It’s the expectations that ruin supporters. Atleti are in fourth place in La Liga, yet there was a sense that they could challenge Barcelona and Real Madrid. Simeone tried to warn us last summer of this upcoming season’s difficulties after losing his backline of Diego Godin, Juanfran, and Filipe Luis, as well as Antoine Griezmann. Of course, we didn’t believe. Simeone’s 4-4-2 formation was supposed to take on its own transformative energy, grinding out 1-0 wins regardless of personnel.

Simeone observed that he didn’t feel there was any more criticism this season than in the past, and that there are always moments of speculation during a long year. There is a cyclical nature to his seasons. Exciting attackers signed during the summer window promise a more offensive, progressive style of play. We determine that this is the year that Simeone finally lets go of his compact, 4-4-2 reigns into something more open and expansive. The team struggles to get results early in the season, to which Simeone inevitably reverts back to the tried-and-tested, the defensive, counterattacking shape.

And again, we fell for it. Atleti spent over $320 million in a summer haul that included 20-year-old playmaker Joao Felix for $138 million. Simeone admitted that Felix’s signing would force him to update his style. A 7-3 win over Real Madrid in the preseason provided a blueprint of how Felix could pick up the ball between the lines and play Costa through on goal. Instead, Felix’s two goals and one assist return is further proof for detractors to show how Simeone is unable to grow. Former Dutch international Rafael van der Vaart said that Felix is “at the wrong club and working under the wrong coach.”

But Costa has been injured since November. Morata is also sidelined by a muscle injury. Atleti went hard after Edinson Cavani over the winter window before eventually reuniting with Yannick Carrasco. The thinking was clear: they needed to add a lead striker who could stretch defenses so Felix could create. The newly pieced together defense has given up the second-least amount of goals in Spain. Yet a lead striker is just as vital to how the team functions.

Simeone has searched for a striker in Costa’s mold since Costa originally left the club for Chelsea in 2014. The Argentine can seemingly mold a backline and midfield on the fly, yet the striker is the one position that eludes him. Perhaps it shows how discipline and off-ball defending can be drilled into a side through repetition, but that ability to a chance out of nothing is an innate skill. It is the one question that we always return to when piecing together an Atleti side in our analysis: how does one find a Simeone player in the transfer market?

His hulking, intimidating presence has gone viral, a personification of the fear imparted by Simeone sides at their best (he once warned Jose Mourinho that he’d rip his head off). The two have been together since their time at Catania in 2011, rebuilding Atleti side by side. Though with Burgos missing from a press photo with Simeone, along with hiring a new agent, there are rumors that Burgos will leave his role this summer in search of a lead position.

Simeone surprisingly extended his contract through the 2022 season, a contrast to past years where he left us wondering if he had burned himself out. Of course, that extension could also be strategic in recruiting players on the caliber of Felix. But it does give him time to develop Felix and this next generation of Atleti sides that capture our imagination. This may be where Simeone wants his team, doubted, written off before a big Champions League clash against Liverpool next week.

There was a report that Atleti were monitoring Mauricio Pochettino, presenting an image of what the side could look like once - or if - Simeone were ever to leave. In a vacuum, you could debate the quality between Pochettino and Simeone. Yet the context is as important wins, losses, and trophies. We’ve seen sides struggle to rediscover their identity after losing a long-term manager, and how certain figures are linchpins in holding a club’s fabric together beyond just tactics. Those demanding Simeone leave the club must be careful. It’s not just the role that must be replaced, but also the meaning.