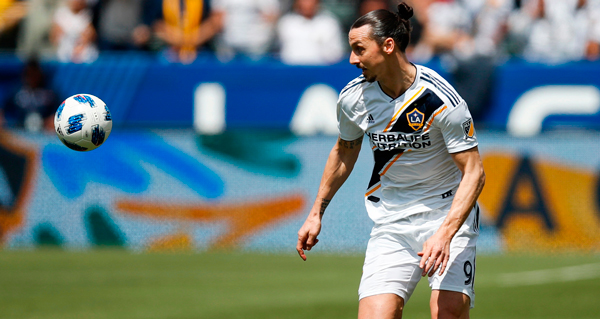 Of course, Zlatan Ibrahimovic could only make his MLS debut in the most dramatic way. Subbing into the match with the LA Galaxy down 3-2 against LAFC in a derby match dubbed El Trafico, he received a headed clearance some 40 yards from goal in the 77th minute and hit a perfect volley over keeper Tyler Miller. That by itself would have been enough for an entrance, but it isn’t Ibrahimovic to leave his supporters wanting. He turned in a header in the 91st minute, completing a comeback fit for the Los Angeles backdrop. Ibrahimovic was signed exactly for those moments, to interpret a sea of MLS chaos with game changing technique and precision. Those two goals in sequence earned more than two million YouTube views, and some three million plus views on Twitter and Facebook.

As much as Ibrahimovic rose to the occasion, it was another former Manchester United striker searching for a second life in MLS who may have topped that moment. With D.C. United going for the match winner in the 95th minute off a corner kick and moving keeper David Ousted forward, Orlando City’s Will Johnson received the clearance just before midfield with an open net in front of him. Wayne Rooney, who started the sequence on top of the D.C. box after exchanging places with playmaker Luciano Acosta, tracked Johnson down with a sliding challenge, carried the ball back into his half, then hit a back post cross for the match winner. That clip has been viewed over 2.6 million times.

More than his 10 goals and 8 assists, it was that 25 second sequence that cemented Rooney’s place amongst supporters and placated any fears about his attitude coming into the league. And though his season ended as he missed a penalty in the shootout during their play-in match for the playoffs, and the Galaxy failed to make the next round entirely, the two strikers made an impact in their short time in the league. Rooney especially was the right symbolic player for the right time, tasked with becoming the face of D.C. United’s new soccer stadium. But that is what world class strikers do, and that is why each player made exponentially more than the average $117,000 league salary: not only is it for their consistency match after match, but for their ability to create signature moments.

Despite that quality, there was an existential dread about the two strikers coming to MLS. It wasn’t the fault of Rooney or Ibrahimovic, but of past memories of being burned by fading European stars giving MLS a reputation as a retirement league. And team building has moved to a seemingly more sustainable model, with sides like Atlanta United, New York Red Bulls, and Galaxy rivals LAFC defined by combining savvy South American signings along with promoting players from their youth academy. Rooney and Ibrahimovic could be seen as a step backwards for a league that worked so hard to overcome that perception. They instead raised the bar for their teammates in more ways than one. After scoring the game winning header against Orlando, Acosta remarked that seeing Rooney make the effort to track back motivated the entire side. It was a reminder that success is as much an exercise in finding the right alchemy of people as it is an equation in spreadsheets.

When asked what the biggest difference was between MLS and the Premier League, Ibrahimovic didn’t hesitate in saying “pace” - a speed in passing, a speed in perceiving, and a speed in being able to handle speed. Rooney simply said that the quality was higher than he thought. Perhaps aided by the viral clips and gaudy numbers, people across Europe were equally as intrigued by his mini-renaissance. England manager Gareth Southgate recalled Rooney for one final international appearance to pay tribute to his international career. And beyond the goals, there was a tactical bent to the analysis. Rooney’s reputation was of an energetic player who didn’t quite fit into traditional positional boxes of a forward or an attacking midfielder. Yet as an out and out striker with D.C. United, he was seen as hitting hisold heights in a new way.

Both Rooney and Ibrahimovic came aware of the stereotypes of a previous generation of European stars making their way to MLS towards the end of their career. Even in the offseason, in the face of European options, each stressed their commitment to the league and to their teammates. Ibrahimovic stated that he wasn’t here on vacation. And for Rooney, the move provided an opportunity to close out an international career on his own terms. We can put their impact into raw numbers, whether it’s 22 goals and 10 assists for Ibrahimovic or 12 goals and seven assists for Rooney. But as we’ve seen from Ronaldo’s move to Juventus, there is an immeasurable feeling that comes from a superstar presence in an overall league as well.

With his side up 1-0 in the semifinals of the USL playoffs, Didier Drogba buried a loose ball inside the box. It was his 362nd goal of a 20 year professional career. It would also be his last: the 40-year-old player-owner of the Phoenix Rising retired following their 1-0 loss to Louisville City in the USL final.

In looking at those circumstances, it is inevitable to ask why Drogba ended up finishing his career in Phoenix, in the second division of U.S. soccer, in front of seven thousand fans? This from a player who admitted he was still homesick for Marseille through his second season at Chelsea. Though he more than acclimated, eventually hitting out for an absurd 29 goals in 32 matches in 2009. He scored the Champions League winning penalty in 2012. Off the field, he played a role in creating a cease fire in the Ivory Coast during the 2006 World Cup. Who would have imagined Drogba finishing his career with Phoenix?

Phoenix manager Rick Schantz recalls Drogba calling football a “love story”. That description often comes up when describing his latter years, but his statline of 16 goals and five assists still tell a story of dominance and quality no matter the age. Drogba echoes Schantz’s statement of this stage representing an overall story of football. But this is an American story as well as a soccer story, or perhaps it’s a soccer story singularly unique to America considering the context of money, opportunity and fandom in relation to superstar athletes. The ups and downs are just small details within the larger journey of a lifelong story and brand. Switching sports, it’s the same relationship between fan and athlete that makes Allen Iverson worth $800,000 a year to Reebok, eight years after he’s retired. Nostalgia is a million, maybe billion dollar industry.

Antoine Griezmann recently stated he’d like to finish his career in MLS. That would have further evoked eyerolls a decade ago. But Drogba, Ibrahimovic and Rooney recontextualized the move in terms of those viral moments that only superstars can create, those plays that define seasons, teams and eras that burn in supporters’ minds long after they’ve gone. In that sense, that we aren’t seeing each player in their prime is beside the point. Whether in the Champions League, MLS or the USL, a team is a team. Supporters are supporters. Retweets are retweets. And regardless of playing in front of an audience of thousands or millions, a personal memory is one in the same.