Possession, Pressing, Powerplays: Julen Lopetegui Puts The Past Behind 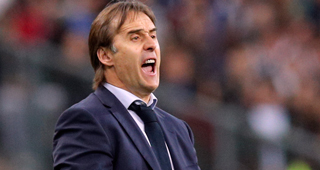 It was only a number, but the narrative was on full display: 78%. That was Real Madrid’s possession in their opening La Liga match this season, a 2-0 win over Getafe. That tally represented their third highest possession percentage for a match since 2009. For a side that won three consecutive Champions League trophies with the most ruthless counter attack in Europe under Zinedine Zidane, new manager Julen Lopetegui went back to the basics of possession. And with Zidane criticized for lacking tactical innovation outside of winning, Lopetegui imparted his personality on the squad after one summer. Real Madrid’s off-ball work was on display in the build-up to their second goal, with Marco Asensio winning the ball off a press and showcasing his creativity and confidence before laying a pass off to Gareth Bale.

After the opener, Lopetegui described the league as the competition that proves the true quality of a team. Real Madrid currently sit in second place in La Liga, level on points with Barcelona, although they were reeling from a 3-0 blowout loss to Sevilla midweek. But they’ve yet to pay for any dropped points with Barcelona also losing to a then last place Leganes and Diego Simeone off to his worst start of his Atletico Madrid career. With no side taking charge early, there is a hint that Ernesto Valverde and Lopetegui are good, though not transformational managers. Lopetegui’s move to Real Madrid caught many off guard as he was third, even fourth, fifth or sixth choice behind Mauricio Pochettino, Jurgen Klopp, Antonio Conte, Max Allegri, and Joachim Low.

Regardless, the 52-year-old manager has a clear goal: shape Real Madrid’s identity in their post-Ronaldo years. Yet not having to play Ronaldo may actually benefit Lopetegui as there were whispers that despite the Champions League goals, the club played better without the Portuguese striker. Athletic Bilbao manager Eduardo Berizzo observed that Ronaldo’s greatness made them predictable, whereas now they have a “whole range” of tactical options.

Those options include Karim Benzema and Isco alongside the aforementioned Asensio and Bale, all of whom in theory will be unleashed without the gravity of Ronaldo’s presence in their way. One could make a case for each player to be the breakout leader of the team. The now 29 year old Bale, who’s yet to fully showcase his dominance through an entire season, has three goals in five matches. And never appreciated for his finishing, Benzema has four goals in six matches (he finished with five league goals last season).

It is telling how differently the side feels considering they still have nine of the foundational pieces from last season’s starting eleven. The back four is the same with Dani Carvajal, Raphael Varane, Sergio Ramos, and Marcelo. The midfield three is still irreplaceable, and still the best balanced in the world with Luka Modric reaching even greater heights in the World Cup. And despite signing Thibaut Courtois and Mariano, their transfer season was relatively underwhelming compared to Barcelona and Atleti.

The biggest changes to the lineup are swapping in Courtois and Bale for Keylor Navas and Ronaldo, which shouldn’t necessarily add up to their current 64% average possession, up 8% from last season. But the idea of playability and malleability without a signature focal point is important as Lopetegui gained his managerial experience through Spain’s U-19 to U-21 national side. He is of the Spanish 4-3-3 possession model (for better or worse as we’ll see in his time at Porto). Still, he demonstrated his pragmatism in a 1-0 win over Espanyol last weekend just days after their Champions League win over Roma. Following the match, he stated the most important part was in how they showed they could “suffer and win”.

Those same possessions principles got him in trouble as he branched out into the club game with FC Porto in the summer of 2014. His time was defined by a promise of an unfulfilled playing revolution. His one signature result was a 3-1 win over Pep Guardiola’s Bayern Munich in the first leg of the Champions League quarter finals, although they ended up losing the tie (that win came with 38% possession). In citing a reason why he was fired halfway into his second season in 2016, critics wrote of the cultural divide between the short passing Spanish style and what was seen in Portugal as inconsequential “possession for possession’s sake.”

“There won’t be a revolution, there will be an evolution” promised Lopetegui upon taking over the national team position from Vicente del Bosque later that year, as he failed up after his time in Portugal. And while many a manager have floundered on the mountain of possession, the initial question heading into Real Madrid’s season of how they would replace Ronaldo was answered by controlling matches through keeping the ball. How this translates to the knockout stages of Champions League remains to be seen.

That Lopetegui is even in this position is a minor upset. He rebuilt his career with Spain over the last two years, which lead to the opportunity to take the Real Madrid job in the first place. But in a Catch-22 that could only take place within the power dynamics of Real Madrid and Spain, the same flirtation also robbed him of a chance to show his quality on the world’s largest stage.

It all came down to timing.

Luis Rubiales of the Spanish Football Federation spoke of the ethics of finding out Lopetegui was taking the Real Madrid position after the World Cup five minutes before the official announcement, two days before the start of the tournament. We know the story from here: Lopetegui was sacked from Spain a day later, two days before their World Cup opener against Portugal. With an inexperienced interim manager and amidst a cloud of controversy, and despite their status as one of the pre-tournament favorites, they limped out in the round of 16.

Saul, outspoken in saying Lopetegui deserved to keep managing through the World Cup after his two years with the national team, was subsequently ostracized from the team until his recent goalscoring revival. And while we joke that any manager could roll the ball out and Spain would be Spain, Sergio Busquets said that Lopetegui made the side more tactical than they were under del Bosque. He won 14 of his first 20 matches with the national side, including a 3-0 win over Italy in qualification and a 6-1 win over Argentina in a pre-tournament friendly.

There is a sliding doors moment of how far Spain would have gone in the World Cup had Lopetegui stayed on as manager. Perhaps the biggest impact of Lopetegui remaining would have been in a lack of distraction as opposed to tactics. After all, they lost to Russia in the knockout rounds in their own unique way, with 79% possession, 1115 pass completions and complaints of possession for possession’s sake. Even with the starting eleven in the loss featuring the foundation of Ramos, Gerard Pique, David Silva, Diego Costa with Andres Iniesta and Dani Carvajal coming off the bench, the pieces never quite fit. That listless showing alongside the controversy surrounding Lopetegui shaped Spain’s narrative in the loss. How differently would perception be had Spain still lost to Russia with Lopetegui as manager?

Asked if he would do things differently, Lopetegui said he had no regrets in missing out on a once in a lifetime opportunity. Plus, he’s already adapted to Real Madrid-speak in saying that it’s not about having possession but about winning. And Spain has already moved on under Luis Enrique, looking as strong as they’ve ever been. Yet in a league where the top two sides are intertwined with the national team, the common refrain is that we’ve now entered the Real Madrid era of Spain. Thus, strangely, in a roundabout way, Lopetegui lost his chance to lead Spain on the world’s biggest stage but he finds himself firmly in the national team picture. To paraphrase an American writer, the past between club and country is never dead. And with as many as six players from Real Madrid in Spain’s starting eleven, and by adapting their direct, modern style for this next round of international competitions, it certainly isn’t even the past.