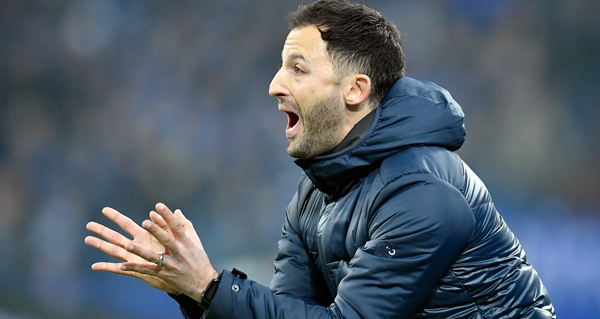 With a 2-1 win over Hoffenheim in the return fixture of their Bundesliga campaign, 32-year-old Schalke manager Domenico Tedesco gained revenge for his team’s September defeat earlier in the season. Their status within the public consciousness also switched in the six-month span, with the Italian manager overtaking the 30-year-old Hoffenheim manager Julian Nagelsmann as the young phenom manager of the moment. The duo could have easily swapped positions as Tedesco managed Hoffenheim’s youth sides as Nagelsmann moved up to the most senior position. Having two managers of that caliber and age at the same club would appear generational. But in looking at the larger Bundesliga trend, the young managerial talent pile-up was a design more than a decade in the making.

Tedesco is this season’s revelation, with Schalke currently sitting second place in the Bundesliga table. His story is one of competence and surprise. Tedesco had only managed 11 matches at the senior level, saving a last place Erzgebirge Aue from relegation in the second division. His immediate success may bely his youth, but certainly not his experience or reps. Tedesco began his managerial career in 2008 at Stuttgart’s academy. According to the 10-year theory for the amount of time needed for a genius to have their first groundbreaking thought, Tedesco is right on schedule.

His innovation this season is in implementing the side’s pentagon shape in midfield. Playing with a five defender backline, deep lying playmaker Max Meyer plays behind two box-to-box midfielders, and two strikers responsible for pressing and cutting off passing lanes in Schalke’s own half. The five players shorten the field in occupying the middle and each half space. The narrow shape is designed to force opposition possession into specific areas of the field to produce turnovers and quick counter attacks. Tedesco distinguishes between his active deep press and parking the bus by saying “Sitting deep means I just shut down passing lanes...when using a deep press, I shoot forward frequently” to force transitions.

But Tedesco and Nagelsmann’s youthful innovations are the norm in the Bundesliga. Six of its 18 managers who began this season were under 40 years old, including the 39-year-old Sandro Schwartz at Mainz, 38-year-old Manuel Baum and Alexander Nouri at Augsberg and Werder Bremen (Nouri was fired in October and replaced by 35-year-old second team manager Florian Kohfeldt), and the 36-year-old Hannes Wolf at Stuttgart (Wolf was sacked in January). For comparison, the 40-year-old Eddie Howe is the youngest Premier League manager. Benevento’s 38-year-old manager Roberto De Zerbi is the youngest in Serie A, and 39-year-old Villarreal manager Javier Calleja rounds out the youth in La Liga (outside of soccer, Sean McVay became the youngest coach in NFL history last season at 30 years old).

Germany’s early 2000’s grassroots rebuild that culminated with winning the 2014 World Cup, had the knock on effect of developing managers in addition to players. The same managers responsible for developing the core of that side at the youth level are now getting their chance on the highest stage. Former Dortmund manager Thomas Tuchel describes this as the “second wave” of German football’s restructuring. Bayern Munich technical director Michael Reschke notes that many Bundesliga sides employ professional managers ranging from the u-11 level through the u-19’s, creating a relationship between player and manager from a young age. In the last five seasons, 12 out of the 18 Bundesliga sides promoted first team managers from within as compared to just four Premier League sides in that timeframe.

And managers undergo as rigorous a process as players themselves. That Nagelsmann and Tedesco are forever bonded as 2016 classmates in their German FA coaching course, with Tedesco graduating above Nagelsmann, is a story unique to theory-influenced Bundesliga game. The level of intensity is seen first hand in the documentary Trainer!, focusing on the cutthroat world of German managers starting in the lower leagues and attempting to work their way through the ranks. Along the way, they receive criticism and analysis as if they were players themselves. And if developing players is a significant portion of success for club and country, then systematically improving managers must have its own importance as well.

And we must also note the career arc of this “second wave”. Soccer is filled with outsiders having an outsized influence on tactical innovations, from Arrigo Sacchi’s career as a shoe salesman to Maurizio Sarri’s banking career to Tedesco’s engineering background. It’s difficult to quantify the difference between a manager playing professionally as opposed to gaining experience at the youth level as early as possible. Bayer Leverkusen manager Heiko Herrlich reflects upon the variety of ideas powering the rapidly changing Bundesliga game, citing the influence of handball on counter pressing (Tedesco mentions forechecking from ice hockey as an inspiration for his press). In contrast to positional and possession play, many of the innovations seen from this “second wave” come from how a team closes space and disrupts opposition tempo and timing without the ball.

If there is such thing as a phenom manager whisperer, it would be current Schalke and former Mainz sporting director Christian Heidel. In addition to Tedesco, Heidel gave Jurgen Klopp and Tuchel their first senior jobs while at Mainz. In hiring Tedesco, he reflected upon how impressed he was with the open style of the Italian’s u-19 Hoffeneim side. Stylistically, Heidel holds similar views to his RB Leipzig counterpart Ralf Rangick, with the visionaries of German football arriving at the same conclusion of pressing, direct counter attacks, and setting an overwhelming tempo. The nuances and details are in its shape.

As Nagelsmann discovered this season, success is especially fleeting as innovative managers battle both against the realities of being a developmental club in modern football and against the next wave of innovative managers. After qualifying for the Champions League last season, Hoffenheim center back Niklas Sule and midfielder Sebastian Rudy promptly left for Bayern Munich the following summer (forward Sandro Wagner left for the champions this winter). Labeled as the “next Michael Ballack”, Schalke midfielder Leon Goretzka is rumored to make the move to the German champions after this summer’s World Cup. A player developing at a club then moving onto a bigger side is nothing new. But in the Bundesliga, that cycle increasingly describes a manager’s career arc as well.