Ezequiel Barco, A Bridge To Europe, And The Future Of The MLS 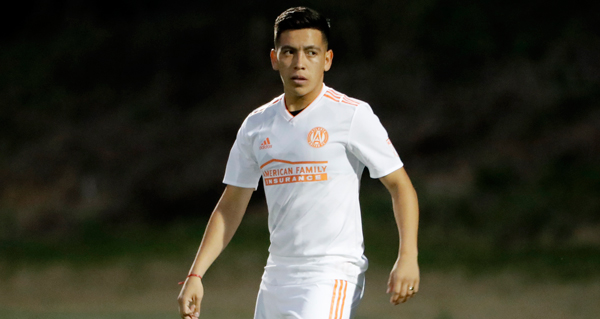 Just 18 years old, Argentine winger Ezequiel Barco made MLS history by becoming the league’s most expensive signing ever. The $15 million Atlanta United paid Independiente for his rights beat Toronto FC’s previous league record in signing Michael Bradley for $10 million from Roma. It also represented the second highest fee the Argentine club ever received for a transfer only bested by Sergio Aguero’s move to Atletico Madrid in 2006. But the significance of the deal wasn’t just in Atlanta adding a speedy playmaker, but in how Barco chose to sign with the MLS club over rumored Portuguese and Premier League opportunities. La Gazzetta dello Sport rated 5-foot-5 attacker the tenth best under 20 player in the world, a list featuring Kylian Mbappe and Christian Pulisic.

Barco puts an exclamation point on the recent trend of MLS sides not only signing South American talent, but younger players from the continent who may have otherwise gone to Europe to develop. The average age of the 25 South American players MLS clubs signed this offseason was 21.7 years old. The Barco signing may never be the inspiration for a New York Times best-seller, but the move is in stark contrast to the era of The Beckham Experiment when the 32-year-old David Beckham was the league’s biggest signing. That was only 11 years ago, but the style of team building feels like it's from another lifetime. As Almiron admits, the league is now seen as the vital middle step between South American and Europe.

It’s impossible to pinpoint the exact moment when that paradigm shifted to this approach of building around South American youth. But in their second year of existence as a franchise, Atlanta United under Tata Martino are emphatically born of this new wave. Their high pressing, transition oriented style mixed with young, South American attacking flair was on display as general manager Carlos Bocanegra built a team from scratch last offseason.

Attacking midfielder Miguel Almiron more than lived up to his $8 million price tag with a nine goal, 14 assist debut season while overtaking Andrea Pirlo as the league’s best-selling jersey. He provided the defense splitting passes after Atlanta won the ball, with Martinez scoring 19 goals in 20 matches and setting a league record with a 1.12 goals per 90 average (here’s a demonstration of the duo’s speed on counters). If Barco has a similar impact, and his speed and dribbling on counter attacks are already causing defenses issues in pre-season, Martino’s club genuinely stakes a worldwide claim as a club for young phenoms to develop with style.

This emphasis on player development comes at a unique moment in U.S. soccer in light of the recent World Cup qualifying failure. And the synergy between the MLS and the national team takes on a different context with the newly formed general manager position for the USMNT to oversee its team construction. Bocanegra was recently linked in the role for reasons outlined here. And one could ask how this new team building trend affects player development at the academy level. For their part, Atlanta United did send five players from their academy to the U-17 World Cup last fall.

Regardless, spending $15 million to sign an 18-year-old player would raise attention anywhere in the world, much less in the MLS. But whether Atlanta are alone in their eight-figure ambitions, or if these types of gambles become the norm, is a philosophical battle that will shape the league on and off the field for years to come.

There was a sigh of relief throughout Twitter when Atlanta United lost in penalty kicks to the Columbus Crew in the first knockout round of the MLS playoffs. The club set a single game MLS attendance record with 70,245 fans on their way to averaging a league record 48,200 supporters per match. While other MLS clubs could stake their claim as the most successful expansion team, no side built an identity on and off the field as quickly as Atlanta. They were born into the social media age, and they were not shy in flexing their impressive statistics with the playing style to match that energy and excitement.

Despite the loss, Atlanta doubled down on Martino’s style. In addition to Barco, the club added midfielder Darlington Nagbe from the Timbers. Nagbe was a divisive figure in his seven seasons in Portland as his highest moments and displays of athleticism failed to translate into hard goals and assists. He may have been played out of position as a winger as opposed to a box to box midfielder where his technique and quickness would be on display throughout a match. He’ll play as one of the two holding midfielders in Martino’s 4-2-3-1 formation. Only required to play to his strengths, his dribbling through the middle at pace will only further provide a platform for Martinez and Barco to get into 1-on-1 situations with the opposition backline.

On the Barco and Nagbe acquisitions alone, the fast got even faster and more devastating in transition. And with those traits the foundation in which MLS sides are built, it is revealing to compare Atlanta’s South American style in contrast to Jesse Marsch’s New York Red Bulls. While both sides rely on high pressing, condensing space and direct play, their influences come from different regions of the world. That the German inspired, largely academy built philosophies of Marsch can go toe to toe with the Martino’s Marcelo Bielsa influenced style is one of the delights of the league, and may go as far as influencing the national team style.

As for Barco, he’s already provided a social media highlight in just his second preseason match. Receiving the ball on the left wing, in front of a set Minnesota backline and with little room, he dribbled inside and beat two defenders before unleashing a strike into the top corner. The keeper hardly moved. It was the type of assertiveness and confidence that makes you forget Barco is 18, which is a significant detail. He wasn’t signed to develop on the bench, but to be the creative x-factor in the final third that gets Atlanta United through difficult playoff matchups and win the MLS Cup. If all succeeds, it’s a matter of when, not if, Barco leaves for Europe.