Marcelino And Goncalo Guedes Give Valencia A Counterattacking Shape 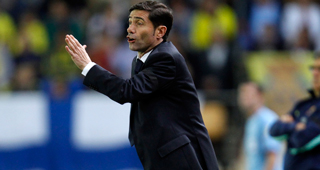 Looking back at the amount of chances Real Madrid created, Valencia were lucky to leave the Santiago Bernabeu with a 2-2 draw in the second weekend of the La Liga season. Zinedine Zidane noted his side’s inability to finish “seven or eight” chances leading to the home crowd booing Karim Benzema, while Valencia manager Marcelino proclaimed Real Madrid midfielder Marco Asensio the future of club and country. Regardless, the result was an early sign of a Valencia side recovering from a two-year managerial merry-go-round. Outside of any style or tactical impact he may have had on the side, Marcelino added that his side simply “work.”

Hired last July, the 50-year-old Spaniard is the club’s the fifth manager in two years. That list goes in order: Voro, Gary Neville, Pako Ayestaran, Voro again, Cesare Prandelli and Voro again before their latest hire. Marcelino went back to basics, starting with his 4-4-2 formation focused on transitions and balanced partnerships. In the center midfield, Inter loanee Geoffrey Kondogbia provides the box-to-box ability with partner Dani Parejo pulling the strings. In attack, Rodrigo works as a second striker to open space for Simone Zaza, who is second in the league in goals. Center back Ezequiel Garay plays sweeper to Jeison Murillo and Gabriel’s physicality.

But there is one especially devastating attacking pattern specific to this Valencia side which highlights the 20-year-old Portuguese left winger Goncalo Guedes as the engine of Marcelino’s counters. Guedes moves inside from the sideline to receive the ball in the left half space, leaving the left wing open for an open run from 22-year-old left back Jose Gaya or a pass down the middle to the former Real Madrid youth academy product Rodrigo. Vital for a counter attacking side to transition quickly into offense, the repeatable sequence is a simple way for Valencia to breathe and get behind opposing high lines with off ball movement and pace.

A variation of the above sequence created the opening goal against Sevilla and displayed Guedes dribbling and shooting ability. With Rodrigo and Guedes occupying the center, Rodrigo dropped back to receive the ball and played a quick one touch pass to Guedes, who then beat three defenders and scored off a shot outside the box. He repeated the pattern with striker Santi Mina later in the match, getting behind Sevilla’s center backs before playing a through ball to the super sub for a goal.

Guedes has turned that specific type of assist into his signature move, and his ability to dribble down the left and cut pass back to the middle has won Valencia at least two matches. He assisted Zaza’s game winning goal against Las Palmas from that area. Against Real Sociedad, he took an errant pass down to the touchline and laid it off to Rodrigo for the opener. Then, tied at 2-2 in the 85th minute of the same match, he dribbled down the left and cut back again to Zaza for the match winner (Marcelino pulled a muscle celebrating the goal). Perhaps the call for him to win a Ballon d’Or is premature, but it gives a glimpse into why PSG bought him for $35 million from Benfica last season.

Atletico Madrid is a foundational comparison in any discussion of the 4-4-2 in La Liga. While both Marcelino and Diego Simeone eschew possession for position, Atleti’s attack when they had Diego Costa as striker highlights the versatility of what many see as a basic template. While the focal point of the Valencia’s counter attack comes from the interplay between a winger moving inside with the ball to overload the middle, Simeone’s early sides played with four center midfielders across the midfield and moved to a 4-2-2-2 shape in possession. The type of left winger each manager used lays presents the contrasts even further. Guedes finds penetration through direct pace, while Simeone’s Koke controlled the match with his passing.

Simeone has tried to replicate Guedes’ production from the left wing with rangy dribblers like Yannick Carrasco and Nico Gaitan. Franck Ribery represents the old guard of this form of winger, with Ivan Perisic the most on form version of this current generation. Yet in the right position and with the right team, Guedes has the ability to lead the future group of left sided counter attacking wingers.

The right fit is as essential as talent, as Marcelino knows first hand. Two seasons ago, he lead Villarreal to a Europa league semifinals and a four place finish in La Liga using his 4-4-2 framework. Yet he sacked a week before their Champions League play in match against Monaco, with no reason given.

Rumors landed somewhere between a brawl with center back Mateo Musacchio after he stripped him of his captaincy, or whether Marcelino lost on purpose to Sporting Gijon on the final match the previous season which allowed his former side to stay in the top division. Regardless, it showed his rigid nature. There was no doubt Marcelino could and would win wherever he managed, but it was a matter of how much those around him could stomach for the privilege. Fran Escriba, his successor at Villarreal, found success using his players last season. He was fired six matches into league play this year.

In a theme that could be described as addition by subtraction in the summer transfer window, Marcelino emptied the Valencia locker room. Gone were names like Nani and Alvaro Negredo, replaced with players with something to prove. Guedes, on loan from PSG, played just eight matches for the club. Kondogbia struggled at Inter. Gabriel failed to lock down a position in the starting lineup at Arsenal.

Marcelino is a demanding manager, focused on using cutting edge analytics to monitor his player’s weight. The narrative this season is of an underachieving side with players at a crossroads in their careers regaining relevance together as one, although one could wonder how long his players will react to his demands once they achieve success (the insistence on “suffering” is synonymous with his style). Further yet is how Marcelino continues to progress the 4-4-2, especially once Guedes returns to PSG next season.

But that we are even having this debate shows how far Valencia have come in three months since the season started. Currently in second place, Marcelino’s side adds another wrinkle to the style and personality of the league alongside the big three of Real Madrid, Barcelona and Atleti. Given their success in the early part of the 2000s and the quality of their youth academy that produced David Silva, it’s a position they should have been in this entire time. Marcelino was quick to add that a title run for his side this season was impossible. Unlike his previous position at Villarreal, he may even get enough time to prove himself right or wrong.