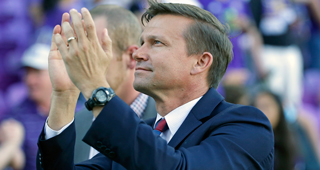 The weekend before the U.S. men’s national team lost 2-1 to Trinidad and Tobago and failed to qualify for World Cup, Jesse Marsch’s New York Red Bulls beat the Vancouver Whitecaps 3-0 to put the side firmly in the Eastern Conference playoff race. The second goal scored by striker Bradley Wright-Phillips and assisted by 18-year-old midfielder Tyler Adams showed off the best of the overarching Red Bull soccer brand: directness, hitting transitions with ruthless pace and a hint of youth. He described his reliance on controlling space instead of possession as the “anti-Barcelona.” After losing center midfielder Dax McCarty and struggling for the majority of the season after finishing with the best record in the MLS two years ago, their playoff position showed the effectiveness of Marsch’s unorthodox 3-6-1 formation experiment.

It’s appropriate to introduce the Red Bull soccer philosophy as instilled by Ralf Rangnick. We examined the controversial rise of RB Leipzig last season where their youth based approach to the transfer market and player development influenced a high pressing style that took second in the Bundesliga. Red Bull operate or sponsor clubs in Brazil and Austria, in addition to New York and Germany. RB Leipzig and Red Bull Salzburg both made the Champions League this season, leading the parent company to clarify the independent nature of each side. Regardless, the underlying style connecting the clubs lies in its modern approach of pressing, tempo and transitions befitting an energy drink company.

Fielding a 3-6-1 formation is a process as opposed to a default lineup. Since taking over the club in 2015, the 43-year-old former midfielder was known primarily for his 4-2-3-1 formation. And while a strength of the lineup is the solidity offered by two holding midfielders, offers compactness and pressing triggers, especially when baiting opponents to pass to the sideline. There’s a synergy in a compactness of attack, losing possession with numbers nearby, then regaining possession for another attack featuring quick touches and direct off ball running.

Marsch looked to develop his approach this offseason by lining up in a 4-2-2-2 formation, a shape more in line with the club’s European approach. One can draw a comparison to former Red Bull Salzburg manager Roger Schmidt who took the formation to its most extreme pressing end for three years in Austria and another three seasons with Leverkusen. Yet Schmidt’s time in the Bundesliga ended with seven losses in his final 13 matches. Whether the players broke down physically due to the demanding style or opponents figured out his tactics, his side never regained their initial exciting form.

Marsch faced a similar period of struggle this season, although his lack of results could be explained due to MLS salary cap constraints that result in a side juggling their depth from season to season. The Red Bulls lacked the athleticism and cohesion to stifle the midfield in their new formation. Instead, Marsch reassessed and readjusted with a three defender backline that allowed him to play four center midfielders, thereby giving his most dangerous creators Sacha Klejstan and Sean Davis more time on the ball (two wingbacks were responsible to track endline to endline, with Wright-Phillips alone up top). Klejstan noted the attacking freedom of the new formation, especially in playing alongside other center mids. The impact was immediate: they didn’t score more than two goals playing in their previous shape all season. They scored eight goals in the two games following the switch. The shape is unorthodox, but the pressing and central compactness remain.

An underlying factor to the pressing approach is how well it lends itself for a low budget side to punch up against more expensive teams, hence the easy comparison to soccer Moneyball. Gone are the days with big name players like Thierry Henry and Rafa Marquez. Results season by season are only half of the story and is often eclipsed by the important of player development. Center back Matt Miazga turned a high tempo, high press style into a move to Chelsea in 2015 and Adams, who models his game after N’Golo Kante and Naby Keita, has been linked with moves to England. And Marsch himself may not be far behind.

What is the role of a national team manager in relation to the domestic league? Should the role be one of pragmatism, of putting the best pieces together for a few weeks out of the year, or is it a position of influence serving as a beacon to a larger style?

Bruce Arena resigned in the fallout of the World Cup failure. U-20 manager Tab Ramos is rumored to temporarily take the job for a friendly match against Portugal next month, giving the USSF time to pick up the pieces at another crossroads moment. Arena replacing Jurgen Klinsmann represented a move back to the basics of organization and counter attacking. And at the heart of Jermaine Jones’ Instagram soliloquy demanding MLS managers give more opportunities to young players and Taylor Twellman’s rant remains a question bigger than just missing out on a World Cup cycle.

International names from Sam Allardyce to Laurent Blanc are rumored as candidates for the U.S. job. Meanwhile, Marsch’s next step appears to be in the other direction. He left the team for a week in June to attend a UEFA pro license coaching session in Poland and seems destined to eventually take the top job at Red Bull Salzburg given the connection between the clubs. For now, Marsch is in the middle of proving something even more impactful than a national team position: that a modern approach centered around youth, pressing and directness can translate into tangible results in the MLS.