The Spaces, Shapes And Geometries Of The Training Ground 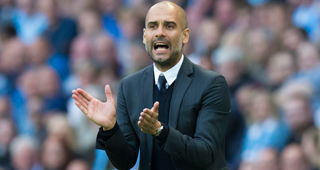 An official soccer field measures somewhere between 110 and 120 yards long, and 70 to 80 yards wide. The dimensions can be skewed for better or worse. Highbury Stadium was famously small despite the possession style that defined Arsene Wenger’s club during that era. Mauricio Pochettino prefers more space to implement his style than what White Hart Lane offers. Space, or a lack thereof, takes on two forms of either expanding or compressing it depending on the situation. Like a painting canvas, a manager divvies up the field to emphasize various aspects of a playing approach. How these spaces are manipulated, often in training, offers a unique glimpse into a manager’s mind.

Pep Guardiola turned this division of space in training into a postmodern art. Guardiola divided the field into five vertical sections - two wide areas, two halfspaces, and the center. Each section has its own rules for players: attacking wingers are only allowed to occupy the wide areas, as a wingback or midfielder receiving the ball further down the field in that same space is a pressing trigger for opposition. Two players maximum are allowed in each half space. Four players are responsible for the center. Matias Manna, the brains behind the Paradigma Guardiola blog, matched the positioning between the manager’s training divisions and its real world implications (Manna gave Guardiola a book on Marcelo Bielsa, which eventually lead to him working with Bielsa and Jorge Sampaoli as an analysts). The Bayern Munich variation of this spacing is especially precise.

In explaining what he learned under Guardiola at Barcelona, Thierry Henry analyzed a sequence of possession by asking how many players would have dropped into a specific open space to ask for the ball when Andres Iniesta stood still. It displayed the importance played on maintaining position to open space for teammates in build up phase, to trust that they could play themselves out of pressure. Henry relates a story of scoring a goal against Sporting Lisbon by encroaching into Messi’s wing area. He was benched soon after. The lesson was that he had to respect his manager’s plan. Space is sacred.

- The Rondos of Diego Simeone

Diego Simeone and Atletico Madrid rode the stingiest defense in La Liga to a domestic title and two Champions League Finals. Yet to only appreciate their last ditch tackling is to undervalue the unified movements from the striker pairing to the backline used in their 4-4-2 formation. Out of possession, each striker is responsible for shutting down passing lanes down the middle. Then opposition must bypass the midfield four, lead by the commitment of Gabi. Playing through Diego Godin and the backline adds another layer of skill and risk. Then, the final reward is facing Jan Oblak.

But defending is only one half of the equation. Overshadowed in this sequence is Atleti’s quick one touch counter attack. If Guardiola’s grid is based on opening space down the middle and on the wings, Simeone dividing the field into four sections with each player responsible for both defending and passing through their opponents line clarifies what the Argentine requires of his side - especially in preventing passes through the middle of the field (the drill also requires the attacking team to cross the ball to the other goal in order to score). In that training clip, the staggered defensive shapes each line of four takes when out of possession to protect their goal becomes clear. If the ball is played through the middle, the defending line takes a “W” formation as cover, with a similar compactness and staggered midfield line preventing Barcelona from passing through the middle.

Yet the tight spacing of the drill showcases the importance Simeone places on quick thinking, quick passing, fleet footed attackers in order to play out of those tight situations when recovering the ball. Their take on the rondo drill made viral by Barcelona adds the extra target of flags emphasizing the through ball down the middle, mimicking a pass to the pacy Antoine Griezmann, Yannick Carrasco, or Kevin Gameiro.

The ability to release a speedy striker is essential for how Atleti functions once they win the ball, providing a breath of fresh air into their default condensed spaces. There is also a pattern that emerges: win the ball surrounded by teammates, play one touch passes to play out, and hit the through ball. Their goal against Real Madrid demonstrates the quick, decisiveness play down the middle. The requirements also explain defensive and playmaking balance of midfielders Saul and Koke. Compress space with numbers when out of possession, win the ball, then expand the field with pace.

- Technology and the next chapter: Julian Nagelsmann

Befitting a millennial, the 30-year-old Julian Nagelsmann spent this summer focusing on video and the immediacy of feedback. 20 ft. x 10 ft. video screen were added to Hoffenheim’s training setup for coaches to improve training drills as they prepare for a domestic and Champions League run next season. The manager wants to be able to show his players match solutions on the screen while they remain in position.

If there was one manager who would be on the forefront of using technology in his training method, it would be Nagelsmann. Hired at 28 years old, his ability to relate to his young team is as impressive as his tactical versatility and results. He broke down the managerial equation as being 70% social competence, 30% tactics.

A disciple of Thomas Tuchel, Nagelsmann adheres to the principles of positional play as outlined by Guardiola above. Yet Hoffenheim were especially impressive in their morphing pressing and defensive shape while using a back three formation that would change to a back five when necessary (although their formations ranged anywhere from a 5-3-2 to a 4-3-3). His training emphasized pressing, particularly this version of a 4 on 4 drill which results in quick touches, shots on target, and tackles.

Lastly, a special notice must go to Arrigo Sacchi’s space condensing 442 formation at Milan that won the club back to back Champions League titles from 1988 to 1990. The system demanded that the distance between striker and center back was no further than 25 meters apart to condense space for opponents. His Milan side specialized in “shadow play” during training, a tactic in which his team would play with an imaginary ball to rehearse movements. The legend is that an opposing scout laughed off Sacchi’s approach, and one could imagine Twitter doing the same had the video been available today.

At its highest, soccer melds individual magic with the overall collective function, inside of a rectangular space. It sounds simple, although there is no one correct interpretation of what should happen in that space is the same. The field is neutral, and encapsulates paradigms ranging from possession, defending, pressing, or beyond. It enables limited teams to punch up if properly organized, or talented individuals to achieve success they could never accomplish on their own. And it’s not just about dividing up spaces in training for its own sake. The results, the trophies, and how we remember these sides within history expands with time, as the greatest of art tends to do.