Michael Carrick And The Era Of The Barca Influenced English Midfielder 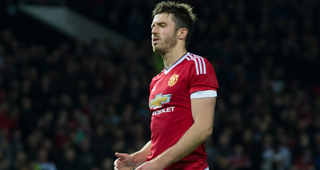 Eighteen seasons into what may turn out to be his final season as a professional, Michael Carrick is having a moment. Ahead of last week’s Manchester derby, Pep Guardiola described Carrick as one of the best holding midfielders he’s ever seen in his life, alongside Sergio Busquets and Xabi Alonso. The same week, a listener asked The Spanish Football Podcast what English players would have been more appreciated in La Liga than the Premier League. In addition to the usual answer of Paul Scholes, Carrick was mentioned as a player whose perception would have increased had he played in La Liga.

Describing Carrick in one word ranges somewhere between “tidy” and “disciplined”. He is probably the captain of the much derided sideways passing midfielders of the social media age. In a 2014 #AskCarrick Q&A held by Manchester United’s Twitter account, users asked about his favorite back passes to the keeper. Doing himself no favors in describing the nature of his game, he emphasized positional discipline and cutting off supply angles for opposition strikers.

Yet his quality is seen in decades, rather than moments. Sir Alex Ferguson recalled how a long transfer from Tottenham in the summer of 2006 was prolonged. There was also luck involved. In the final match of Tottenham’s season against West Ham, Carrick and nine other players became sick from food poisoning. They not only lost 2-1, but Arsenal leapt their rivals for the fourth and final Champions League position. The allure of United might have been enough to move Carrick regardless of European matches, and the roughly $23 million price tag symbolized the English tax on midfielders in the mid 2000s. Regardless, the sideways, tidy passer swapped Tom Huddlestone and Jermaine Jenas for Paul Scholes and Owen Hargreaves.

When his quality wasn’t obvious, he had the biggest names in the world backing him. Ahead of their 2009 Champions League semifinals match, Xavi observed that Carrick gave United balance. In 2013, Arsene Wenger added that Carrick should be the PFA Player of the Year while insisting he was good enough to play for Barcelona, which was the highest praise one could give to a midfielder at the time. He was most served by the domineering presence of Ferguson. If Ferguson insisted that Carrick held the keys to United’s success, then who were we to argue?

Carrick served as the foundation of a United side that Zonal Marking considered the #3 team of the decade from 2006 to 2009. We can see the variety of formations, styles, and trends Ferguson implemented in those three seasons, especially to keep up with other European sides. From the 4-2-3-1 formation in 2006 with Carrick and Scholes at the base, to the dynamic 4-3-3 in 2008 that featured Ronaldo, Wayne Rooney, and Carlos Tevez in attack. Carrick and Scholes were at the foundation of these differing, albeit counterattacking shapes. If his technique was held in high regard, perhaps the underrated aspect of Carrick’s underrated nature is his versatility.

The retirement of Frank Lampard and Steven Gerrard over the past two years represents a changing of midfield eras in the Premier League. Carrick was never known for his running to begin with, and he’s played the same way the entire decade in a United shirt, just a little wiser and more clever with each season. And his perception seems to have grown amongst popular support in the past three seasons as he provided sense within United’s disjointed struggles. His testimonial this summer is a who’s who of players who defined the mid-2000s Premier League, and a sign that in the end, he was properly rated.

Jack Wilshere is running on a treadmill this week after suffering a hairline fracture on his fibula in April while on loan at Bournemouth. The Arsenal midfielder was kept on a close leash by the Bournemouth medical staff this season, yet the change in scenery didn’t translate to a rewriting of past destiny.

If Carrick’s midfield peers represented a Golden Age of English midfielders, there was a point at the turn of the decade when teenage prodigies Jack Wilshere, Josh McEachran, and Tom Cleverley had potential to take the Premier League into a different stylistic direction. Those years were the height of the football world attempting to emulate Spanish football and Barcelona’s tiki taka, and they represented a new era of a technical, thinking midfielder. Wenger once described Wilshere as having Spanish technique with an English heart. Over 90% passing completion rates were held as the gold standard.

Years later, each went on their own path of unfulfilled potential. Wilshere returned to Arsenal after his injury, with his and Wenger’s future in doubt. McEachran, who recalls choosing between Chelsea and Real Madrid as a teenager, made his debut for the London club in a Champions League match in 2010. And in following Chelsea youth players, he then went on loan to Swansea City, Middlesbrough, Watford, Wigan, and Vitesse before moving to Brentford for good. Chelsea technical director Michael Emenalo admitted that the parent side mishandled the midfielder’s career. McEachran’s current claim to fame is being known as the player who was once a bigger star than Paul Pogba.

Cleverley once threatened to replace Carrick in United’s midfield and played alongside him on the national team. In his analysis of a 0-0 draw between Arsenal and United in 2014, Ben Welch wrote that while Cleverley can’t tackle, shoot, or dribble, his football intelligence allows him to make an impact. Without consistent playing time, he left United for Roberto Martinez’s tiki taka influenced Everton, then moved to Watford in January. McEachran is 24, Wilshere now 25, and Cleverley is the elder statesmen at 27 years old. YouTube compilations like Wilshere against Barcelona in 2011 remain. But the actualized player, and promises of a quick thinking, one touch passing midfield that resonates across the world, have most likely past.

Likewise, the search for the next Carrick is outdated in this current era of gegenpressing, which requires its own unique set of skills the ideal midfielder. The pressing, combined with a 3-4-3 formation as utilized by Chelsea, Tottenham, and now Arsenal, requires two dynamic center midfielders, more mobile destroyer than sleek passer. That influence is also seen in the current England side lead by the energetic pressing playmakers like Dele Alli and Adam Lallana. N’Golo Kante was awarded this season’s PFA player, the same award Wenger suggested Carrick win several years ago. Symbolism finds its way on and off the field.

Jonathan Wilson noted last year the difficulty of imagining Carrick playing for Liverpool, Chelsea, or Tottenham. Whether years from now Carrick becomes a footnote or grows in history, he represented a moment and an ideal for a specific playing style. But eras go as quickly as they come. Emenalo believes McEachran has the quality to play at Chelsea, but the Brentford midfielder now emphasizes the importance of getting matches. It’s a pragmatic conclusion for that group of midfielders who could pass, turn, and give calm to a match with quick touches, but could never find a more expansive role. Or maybe, like Carrick’s late development and appreciation curve, they won’t have their full impact for another decade.