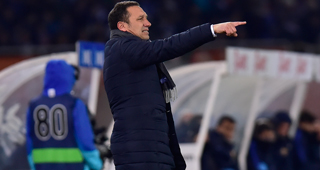 Amidst a flurry of rumors of managers set to replace Luis Enrique at Barcelona next season, Eusebio Sacristan’s new contract with Real Sociedad ruled out any potential reunion with the Catalan side. There was a debate to how seriously Barcelona would actually consider their former B team manager, but regardless, it was a show of commitment to the Basque side currently a point out of a Champions League position. And as a side note of how fast soccer moves, a Eusebio led Real Sociedad defeated Barcelona 1-0 two seasons ago and almost cost Enrique his job. Barcelona and Enrique recovered, of course, and a treble winning history wrote itself.

Besides, Eusebio managed at Barcelona twice, getting fired as B team manager in 2015. He played under Johan Cruyff’s Barcelona Dream Team sides in the early 90s alongside future managers Pep Guardiola, Michael Laudrup, and Ronald Koeman. He was the lead assistant during Frank Rijkaard’s time at Barcelona before returning to the club in 2011 to manage the B side. The appointment represented an era where managers would theoretically move up from the youth academy to the senior side while implementing a singular style throughout each team.

A passive personality did Eusebio no favors in an environment where a manager must also be a guardian of a philosophy. And while youth teams prioritize player development over results, Eusebio’s side was relegated to the third division. There was a lack of triangles and rehearsed moves we’ve come to associate with Barcelona’s senior side, and there was a sense that the manager put results ahead of tiki taka. It seems unjust to blame a lack of first team talent from that generation on Eusebio on the surface. But the side he managed in 2014, with Samper, Munir, Sandro, and Grimaldo, reads as a list of players who almost, but never quite made it at Barcelona. To supporters and outside observers, Eusebio’s inability to impart the Barcelona way is responsible for what we see in the side today.

The Barcelona rumors exhibit how far Eusebio has come in rebuilding his reputation. He took the Sociedad job in 2015 after the David Moyes experiment. They finished a respectable ninth last season before surprising in the current campaign. In broad strokes, Real Sociedad are defined by a 4-3-3 with a focus on wingers. While questions remained after getting relegated with Barcelona, the hindsight analysis could be that he was always meant for a senior side. He is thoroughly a modern manager, utilizing a high pressing system to disrupt opponents as he did in a 1-1 draw against Barcelona. In a 3-0 loss against Real Madrid, his side pressed Luka Modric to put the creative onus on the defensive minded Casemiro.

In attack, La Real strike a balance of combination play and individual brilliance. Eusebio’s reasons for failure with the B side raises further questions as Sociedad currently average over 50% possession per match. The team is built around the attacking triumvirate of center midfielder Asier Illarramendi and inverted wingers Carlos Vela (who said he isn’t actually passionate about the sport) and Mikel Oyarzabal cutting inside to connect possession or take defenders on themselves. 33-year-old captain Xabi Prieto and David Zurutuza providing the nuances of building up play and destruction alongside Illarramendi, the undoubted star and most important player on the side. Prieto made his senior team debut with the club in 2003. And while the ability of the side to develop players is impressive, this also plays into the theory that Eusebio is best as a manager who makes the most out of players on his roster as opposed to molding players with ten figure transfer fees.

It would be remiss to discuss the side without going into the defining characteristic of both Sociedad and Athletic Bilbao’s Basque only transfer policy. A question was posed last month on The Spanish Football Podcast of how Athletic were viewed in Spain. The general consensus was that their Basque only player development was admired by everyone except for Sociedad, who believed that their rivals swooped up their talent and represented the achievement as their own (Athletic Bilbao also represented the region at the Jaialdi festival in Boise two years ago). Yet a strong identity persists. Prieto was born in San Sebastian. Illarramendi, also born in the region, was bought by Real Madrid in 2013 for $32 million before returning two summers ago. And although Sociedad loosened the reins on a Basque only transfer policy, it has yet to translate into huge signings. Their net transfer spend last summer was negative $7 million.

2013 was the last time Real Sociedad made the Champions League. They finished last in a group with Manchester United, Bayer Leverkusen, and Shakhtar Donetsk. That campaign represented a false start as Illarramendi left in the summer and Griezmann followed the season after, negating any momentum they would have built (the side that made it to the round of 16 in 2003 was lead by Xabi Alonso, then he left for Liverpool that summer). The 19-year-old Oyarzabal is tipped for bigger achievements and may follow Griezmann in leaving the club one day. But the unique context of this current iteration with the likes of Eusebio, Vela, and Illarramendi keep hope of stability for another season.

From that perspective, making the Europa League would be an achievement. They’ve scored 42 goals and given up 36, a differential that hardly exudes dominance. Expectations coming into this season ranged from Europa League qualifications to not getting into a relegation battle when considering that a summer where keeper Geronimo Rulli from Manchester City was the marquee signing. Financial limitations and constraints bring out the best of a certain kind of manager. In that sense, Eusebio’s years developing at the Barcelona B team to one day take over a senior side worked - but it was Sociedad who reap the rewards.